by Cimino30 May 2016Dredging0 comments 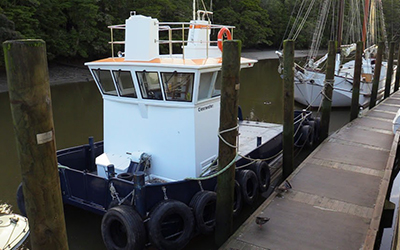 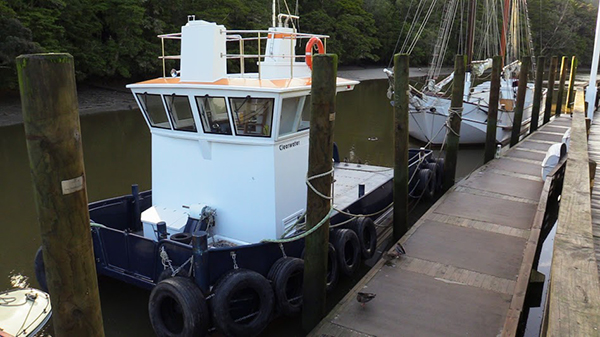 Time to Dredge the Sump: The tug Clearwater was purpose-built to facilitate the dredging of the Mahurangi River, to ensure that the Jane Gifford, astern, could continue to call Warkworth her home, and to restore the town basin for all the vessels that might visit the town, once the objective of creating a navigable 15-metre-wide channel, with a minimum depth of 1.5 metres below mean low-water spring tides is achieved. In a scientific paper quoted opposite, the Mahurangi River is described as ‘a “sump” for coarse sediments eroded from the denuded catchments.’ image Majorlook Productions

Mahurangi Action Incorporated is strongly in support of the application for resource consent by the Mahurangi River Restoration Trust to undertake capital and maintenance dredging of the Mahurangi River and to deposit dredging material at 121 Hepburn Creek Road, Warkworth (OPC Reference THO 108-14).

Mahurangi Action was established in 1974, as Friends of the Mahurangi, with the twin objects of restoring and enjoying the Mahurangi harbour and river and their environs.

Available empirical evidence indicates that Mahurangi sedimentation loads are five to six times higher than prior to catchment deforestation, and are at least double the loads measured in catchments elsewhere in the Auckland region. The tidal reach of the Mahurangi River has borne the brunt of this sedimentation:

Rapid deforestation (50–60 years) following European settlement in the mid-1800s resulted in severe soil erosion and rapid deposition of thick sequences of gravel, sand, mud and vegetation in the upper estuary. Some 3 metres of sediment have been deposited in the upper estuary since 1850 AD and a large proportion of this sediment (i.e., 2.2 metres) has been deposited since the early 1900s. The narrow upper estuary therefore represents a ‘sump’ for coarse sediments eroded from the denuded catchments.

This post-deforestation sedimentation, upstream of Hamiltons Landing, is 10 times greater than the sediment accumulation rate in the harbour downstream, and has drastically reduced the Mahurangi River’s navigability. That the river remained relatively navigable during the early 1900s was probably due to its regular use by the steamboats that serviced Warkworth and the Wilson Cement Works. Since that era ended, in the 1930s, the loss of navigability of the river has proceeded inexorably.

The bulk of Mahurangi sedimentation occurs during extreme rainfall events, and anthropogenic global warming guarantees increasing, increasingly extreme rainfall events that, without the proposed programme of dredging, will rapidly diminish the remaining navigability of the Mahurangi River, despite the measures taken under the Mahurangi Action Plan to reduce sediment generation. Currently, the 16–21-millimetres-per-year sediment accumulation rate of the Mahurangi River is vastly in excess of global sea-level rise rates, which the National Aeronautics and Space Administration records as nearly 75 millimetres since 1993—an average of 3.4 millimetres per year. Ultimately, it must be acknowledged, multi-metre sea-level rise will reverse the shallowing trend, but the timescale during which this will occur currently evades scientific consensus, and so it is desirable and reasonable that the navigability of the Mahurangi River be restored and maintained by the proposed programme of capital and maintenance dredging.

The programme of dredging proposed by the Mahurangi River Restoration Trust has long had the support of Mahurangi Action and, since 2007, has been widely canvassed through the Mahurangi Magazine.

During the extensive community consultation that led to the holistic Mahurangi Action Plan: A Catchment Plan 2010–2030, which was adopted by both the Auckland Regional Council and the Rodney District Council in 2010, Mahurangi Action led a strongly supported and ultimately successful effort to have navigational dredging of the Mahurangi River included—refer objectives and priority actions 2010–2016, line item 20.

In February 2014, Mahurangi Action coordinated a joint submission on the then proposed Auckland Unitary Plan on behalf of itself, the Mahurangi River Restoration Trust, the Jane Gifford Society, and the Warkworth Riverbank Enhancement Group, advocating a comprehensive Mahurangi town basins and navigational dredging plan that included:

Dredging within the Warkworth town basin to restore the ability of visiting boats to remain afloat throughout the tidal cycle.

Dredging parts of the channel of the Mahurangi River to restore reasonable navigability.

In summary, Mahurangi Action unequivocally supports the application by the Mahurangi River Restoration Trust to undertake capital and maintenance dredging within the Mahurangi River and to deposit dredging materials on land at Hepburn Creek Road, as wholly compatible with its constitutionally defined purpose of taking actions to enhance, protect and restore the environment of the Mahurangi for the benefit and enjoyment of the general community.

This statement of support was unanimously approved by the committee of Mahurangi Action, and is published here in the interests of transparency.