Promise of better regional planning fulfilled in the Mahurangi 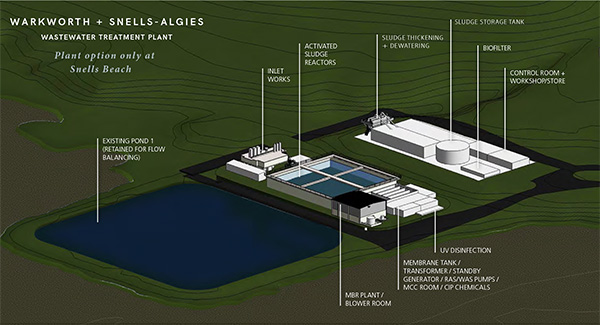 Way it Should Always Have Been: Four decades ago the Mahurangi community could clearly see what their councils couldn’t. For those who now imagine that all Auckland’s ills can be solved by going back to separate councils could do well to reflect on the wasteful, self-interested decisions taken by the Warkworth Town Council in the early 1970s. image Watercare Services

Sometimes the wait for a win can be a long one.

But the issue that precipitated the formation of Mahurangi Action 42 years ago has finally been put to bed.

In 1974, the then Warkworth Town Council was belatedly beginning to address its discharge of its septic sewage, which went directly into the Mahurangi River. The town had only recently built a water treatment plant, and councillors were still reeling from the shock of authorising such unprecedented expenditure. One of their number famously declared that, having been forced to treat the water at one end of the town, he was damned if they were going to treat it at the other.

Parochialism has always been one of the besetting sins of local bodies in New Zealand. The failure to think regionally has kept small communities at a disadvantage.

But with unconscious hypocrisy, Bioletti had led his council, in concert with the then Rodney County Council, to circumvent the conclusion of Tribunal 18 of the then Auckland Regional Authority recommending:

That in view of the national significance of the Mahurangi Harbour to the oyster industry, (as submitted to us by the Dept of Agriculture & Fisheries representatives) the Board support an application, when appropriate, by the Warkworth Town Council to Government seeking special assistance towards the Council’s share in contributing towards a joint sewage effluent outfall outside the Mahurangi Harbour. [Emphasis that of the tribunal.] 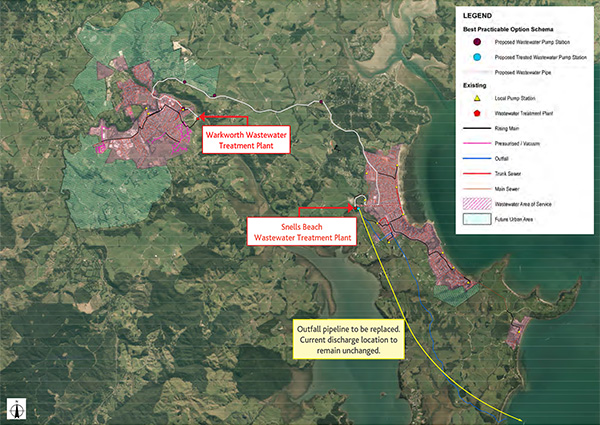 Where it Should Always Have Been: Despite the tribunal offering to go into bat for it and get the government’s help for a solution that would protect the harbour’s nationally significant oyster industry, the Warkworth Town Council choose self-interest. It proved to be a costly mistake, which is only now being remedied four decades later. image Watercare Services

No such application was made. The town council feared the joint scheme would cost it more dearly, and the county council obligingly held off its water consent application in respect to Snells–Algies until the Warkworth contract was safely let. In the event, the capital cost of the Warkworth plant blew out to more than 2.3 times the tendered price. The ultimate irony was that, by then, the unbiddable town council had been subsumed by the surrounding Rodney County Council, rendering the over-priced and energy-intensive plant a costly relic of cussed independence.

As of yesterday, the Auckland Council-controlled organisation Watercare Services has publicly advised:

The preferred option is for a new modern wastewater treatment plant at the existing Snells Beach Wastewater Treatment Plant location. This will service Warkworth and Snells–Algies townships. The discharge will occur at the existing outfall location, off the end of the peninsular.

Four decades ago, councils typically played their cards close to their chests, leaving their communities with the choice of blindly accepting their engineers’ pronouncements or objecting with scant access to the information on which those engineers were basing their decisions. In the 1970s Warkworth wastewater saga, a bumptious town council stonewalled for 11 months, at which time their engineers’ report was finally obtained via the consenting authority. One of the gems revealed was the view that the tidal Mahurangi River was consigned to be a ‘buffer zone’, between a plant planned with inadequate capacity to handle the long-known problem of peak flows resulting from leaky sewers and high rainfall events, and the harbour’s oyster farms. 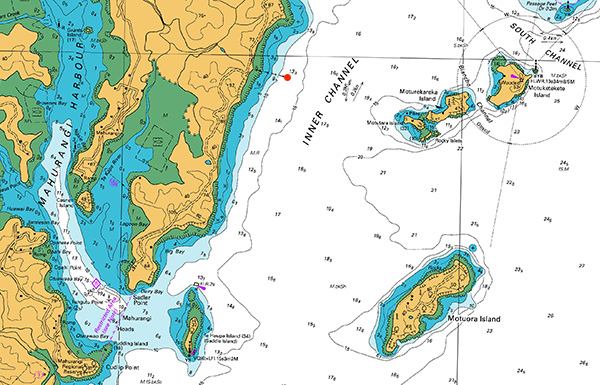 Out into Inner Channel: The outfall for the Snells–Algies wastewater treatment plant was originally going to be straight into the Mahurangi Harbour, as temporary measure only of course, the county council chairman attempted to assure Mahurangi Action. Its ultimate location was progressively chased out along the Mahurangi Peninsula, in turn by the Snells Beach, the Algies Bay, and the Martins Bay communities, to this location. chart Land Information New Zealand outfall identifier Mahurangi Magazine

In the 2010s the contrast couldn’t be greater, with the views of major stakeholders, and the community generally, being sought over a period of nine years leading up to this decision, beginning with work supervised by Rodney District Council senior wastewater planning engineer Jo Floyd. And with regional governance a given, the pettiness of town councils has been consigned to history. That is not to suggest, however, that an organisation the size and complexity of Auckland Council will always get it right. There are any number of disquieting developments such as the defunding of a breakthrough in treating kauri dieback, and the breaking up of the catchment team that has provided a potent and canny mix of support and leadership in addressing the Mahurangi’s elevated sediment accumulation rate—where the community’s preoccupation with wastewater had left it with a migraine-sized blind spot, until alerted to the issue by the regional council in 2004. But by any objective measure, the Mahurangi catchment has just enjoyed a significant win, and another will be announced next week. Also, the smart money is on the Local Government Commission creating a separate Tamahunga Local Board, and granting local board members generally a modicum more power and budget to wield, than has been their lot to date.

The programme adopted by Watercare Services will take about five to six years to implement, and will be completed in stages as development takes place. So, by the time Mahurangi Action celebrates its 50th anniversary in 2024, the discharge of Warkworth’s wastewater into the Mahurangi River will have ceased, with a couple or three years to spare.