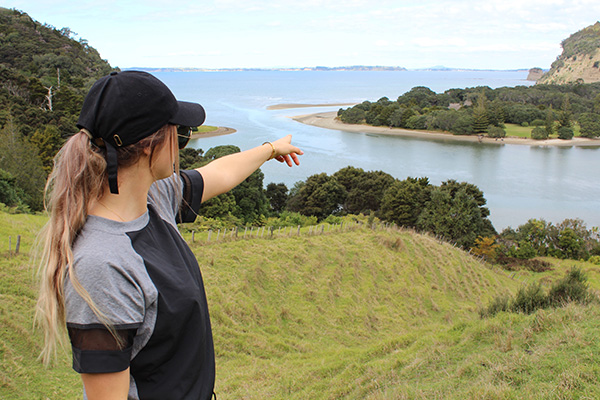 Pūhoi River’s to Cross: Mahurangi Action president Tessa Berger indicating the only point at which a ferry service to Te Muri could operate across the Pūhoi River, given the extensive sandbanks and mudbanks anywhere upstream of the river mouth still within the park boundary. photographer Caitlin Owston-Doyle

The indications were entirely auspicious, even before the wrap-up.

Then the commissioners, who had just finished hearing submissions on the future development of Te Muri, outlined the points they expected Auckland Council’s planning officers to cover in further written recommendations.

By that point, and reinforced by council parks planner Neil Olsen’s verbal responses, it was clear that the vision of a car-free Te Muri hadn’t been a mirage. Everybody including the commissioners were on the same page—except those singing from a recently superseded hymn sheet that saw a footbridge across the Pūhoi Estuary as the only means of creating the Mahurangi Coastal Trail.

But that option had already rightly been ruled out, by a combination of landscape and visual impact, cost—as much as $20 million, an Auckland Council coastal engineer calculated—and mana whenua opposition. The key issue outstanding that the hearings laid to rest was the spectre that persisted from the earlier preconceived, Long Bay-like car-park-at-the-beach, whereby any investigation of a Mahurangi Coastal Trail would have had to wait until the Pūhoi–Warkworth motorway was built, a new intersection created on what will become State Highway 17, and the sealing of Hungry Creek Road. On the likelihood of regional parks persuading Auckland Transport to make a multi-million-dollar upgrade of Hungry Creek Road a priority, Bill Burrill, speaking on behalf of Friends of Regional Parks, was particularly disparaging—his nine years as parks chairman for the former Auckland Regional Council carrying particular heft with the commissioners. 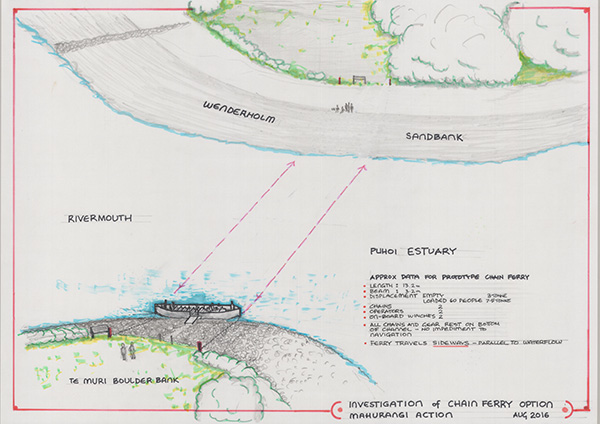 An Attraction in its Own Right: Suggested by Auckland Council, a Pūhoi river mouth chain ferry would make the Mahurangi Coastal Trail a unique New Zealand experience. Although Australia has 28 cable ferries operating, Aotearoa has just one, on the Clutha River, but that, being a reaction ferry, is an unsuitable model for a tidal crossing such as at Wenderholm. rendering Jefferson Chapple

While a number of submitters indicated that they were aware of Auckland Council’s suggestion for a chain ferry, and supported it, others argued against, desperate to maintain support for the fatally scuttled footbridge option. One submitter went so far as to claim there was a sandbar in the middle of the river mouth that would prevent a chain ferry operating at low tide. The clearly sceptical council planners took little convincing, during the lunch break, that such a sandbank was a geomorphological impossibility. There would, of course, be a significant number of challenges to overcome before a river mouth ferry service could be established and operated. A great deal of study, prototyping and trialling would be called for. There will also be no shortage of helpful suggestions, such as using what might be conceived as more conventional craft, such as Hamilton-jets. But, aside from their tried-and-true use since the Middle Ages, cable ferries are renowned for their low energy use. So much so, that bc Ferries, which operates the world’s largest fleet of vehicular ferries—36, from 16-car to 470-car, ferries—went out on the limb to establish the world’s longest cable ferry operation, 1.9 kilometres across Baynes Sound, connecting Vancouver and Denman islands. The Baynes Sound Connector has better than halved its propeller-driven predecessor’s fuel consumption, and being simpler to operate, only needs a crew two-thirds the size. The company expects the cable ferry to save it CA$1.75 million per year.Deborah Marshall, executive director, public affairs, British Columbia Ferry Services Inc. (personal communication, 24 August 2016)

In addition to their parsimonious energy requirements, their lack of propellers—and therefor propeller wash—make cable or chain ferries potentially much less problematic when operating in geomorphically dynamic environments. The last thing the already vulnerable Wenderholm spit needs is propeller wash eroding it, much less to be directly blasted by a water jet, every time the ferry departs. 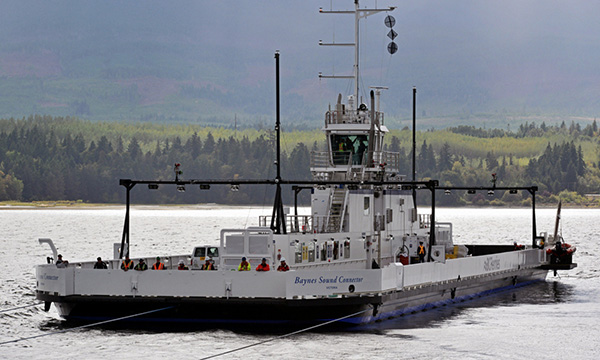 World’s Longest Cable Ferry Operation: At 1.9 kilometres, bc Ferries’ Baynes Sound service connecting Vancouver and Denman islands is said to be the world’s longest—the Pūhoi river mouth, in comparison, is less than 0.1 kilometres across. bc Ferries believes its Baynes Sound Connector, by halving fuel consumption, and needing a smaller crew that a propeller-driven ferry, will bring it savings of CA$1.75 million per year. image Vancity Buzz

While staunch proponents of the Mahurangi Coastal Trail, including the Mahurangi Magazine, are adamant that if it is built, ‘they’ will come, Auckland Council will want to see some evidence of interest. But this is where help can come from other stakeholders. Pūhoi River Canoe Hire has already begun discussions about extending the kayak hire service it runs from the beach at Wenderholm, so as to potentially allow park visitors to kayak across the river near the mouth, before walking on to explore Te Muri. This would soon gauge demand for a ferry service, which, in any event, would initially need to be introduced on advertised days, such as long weekends.

Meanwhile, in a sublime example of the benefit of being heard in support of a submission, and also possibly of the benefit of being last to be heard, two representatives of the Pūhoi Community Forum gave a spirited presentation of the vision of Pūhoi being developed as a staging point for Te Muri. This concept is key to the dilemma of Hungry Creek Road, which, without a multimillion-dollar upgrade, is unsuitable for public vehicular access to the park, but with such an upgrade, would be unsuitable as part of Te Araroa, or for mountain bikers or horse riders, because, on a sealed road, vehicle speeds would be make it deadly for other road users. And the steepness of the terrain rules out constructing a parallel trail. But while the concept of creating a substantial area for parking of cars and horse floats under the viaduct to be built at the entrance to Pūhoi, as part of the motorway construction, the challenge, normally, would be to get all the players around the table and in agreement that this is a once-only opportunity. Here, serendipity has sailed in to the rescue. Northeastern Rodney is on track for becoming a pilot for the council’s high-level Auckland Paths & Trails—previously Greenways—team, in its first major foray beyond the central business district.

The forte of the small but potent paths and trails team is connecting the dots; ensuring that the council, Auckland Transport, New Zealand Transport Agency, corporates, major funders and philanthropists are all working together to deliver the best non-motorised urban and rural connections. Without an A-team such as Auckland Paths & Trails, the Pūhoi Community Forum’s inspired vision would likely have remained just another opportunity lost, and yet another excuse to parrot the supercity pejorative. With it, however, there is every reason to believe that Pūhoi will demonstrate how a switched-on community can add value to a regional park, and do its own economy a power of good in the process. Not only will existing businesses feel the benefit—from the store to the pub to the cafés—but other enterprises would be enabled, such as a stables to supply mounts to non-horse owning Aucklanders, which, after all, is the great majority.

Twenty-five years ago, Mahurangi Action polled all residents in the catchment and on the peninsula, asking if, in 25 years’ time:

A network of walkways will be well established.

While 83% wanted a network of walkways to have been well established, by 2016, only 41% were confident that that would be the case. In the event the pessimists were closer to the mark.

Pessimism, however, is about to be sent packing.