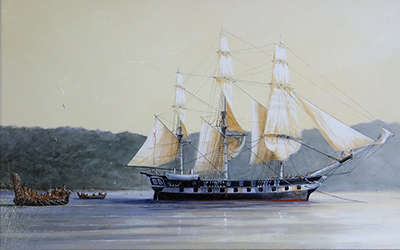 His putative youngest brother was Charles Dickens’ friend and illustrator, Hablot Knight Browne, aka Phiz. Putative, because Hablot was in fact the nephew of the founder of the Auckland region’s first European settlement, Gordon Davis Browne, being the latter’s unmarried eldest sister Kate’s child, rather than his mother’s.

The fifteen Browne siblings appear to have been close-knit, possibly as a result of their father decamping to Philadelphia and starting a new life there as the watercolour artist William L Breton—the embezzled funds he took with him to the United States no doubt easing the transition into his new, self-taught vocation.

Gordon Browne, in contrast, had nothing between his own hard work and the destitution that ultimately got the upper hand. Two of his brothers visited him in Aotearoa at different times, one providing for his care after his health and sanity failed. The fullest account to date of Gordon’s pioneering life forms a chapter of a soon-to-be-published account of the Browne brothers. It is written by descendant Bob Moxon Browne qc, whose book on the Browne and Moxon families was only published in February of this year. 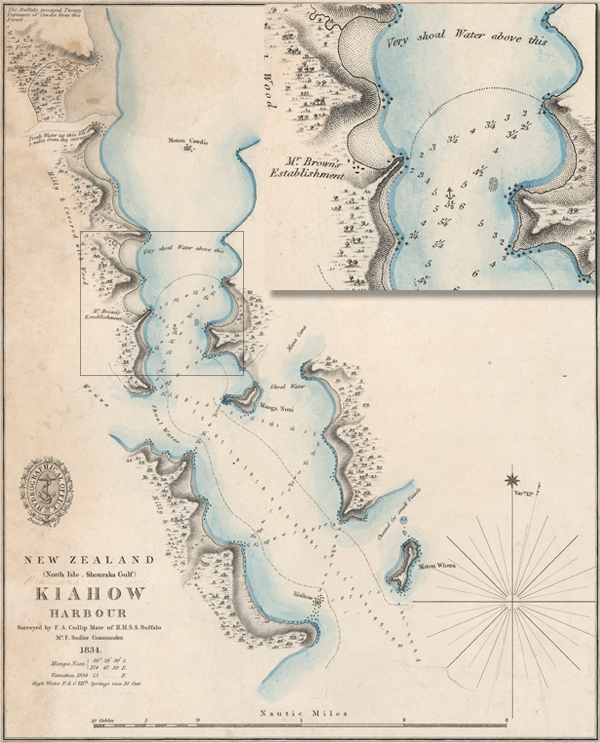 Mr Browne Loses e and Establishment: It was downhill all the way once His Majesty’s storeship Buffalo arrived in the Mahurangi Harbour and helped itself to the resource that Gordon Browne and Ranulph Dacre had purchased expressly to supply the Admiralty. Labelled “Mr Brown’s establishment” on this chart drawn by the Buffalo’s mate, Frank A Cudlip, Captain F W R Sadler well understood that through his actions, the British navy was jeopardising Browne’s enterprise, but was unsympathetically disposed towards such “adventurers”. chart Alexander Turnbull Library | insert Mahurangi Magazine

Beyond the rigorous archaeological work performed at Gordon Browne Bay, little remains of Auckland’s first colonial settlement to illustrate the chapter his relative devotes to him. Serendipitously, however, Mahurangi devotee Paul Deacon had already depicted hmss Buffaloin this mid-1800s context, SS signifying storeship rather than steamship anchoring just downstream of Gordon Browne Bay. Given the devasting impact of the Buffalo’s visit on Gordon Browne’s enterprise, it would be impossible to select a vessel more pertinent to depict hoving into the spar station’s foreground, nor a marine artist more skilled to execute it.

It is moot, at this point, as the whether the resultant image could be ready in time to be included in the new book. Nevertheless, the possibility is being vigorously explored because, aside from being the ultimate Gordon Browne Spar Station illustration, it would form a unique contribution to the pictorial history of the Auckland region, much less the Mahurangi. It is entirely possible that a syndicate of backers will be assembled to commission the painting, and early indications are that members will be readily rounded up.

A Bay Where No Ships Have Been: The History and Archaeology of Auckland’s First European Settlement, 1832–6 was the title of the inaugural Warkworth Town Hall Talk, in July 2017. Robert Brassey had given the same talk, about Gordon Browne Bay, in April of that year, during the first New Zealand Archaeology Week, but brutal weather that evening had discouraged a number of Mahurangi people making the journey to Ponsonby for it. Although this month’s town-hall talk, on Thursday evening, is on a contemporary project—the restoration of īnanga spawning habitat—next month’s, titled The Historical Archaeology of Coastal Trade on the Mahurangi River begins, inescapably, back at Gordon Browne Bay.

The last town-hall talk to tackle whitebait was in February—there was an earlier one, in October 2017. February’s was the best attended yet, by far, fueled by outrage at the prospect of the historic Wilson Weir being removed without—many considered—adequate consultation. This Thursday’s speaker, Warkworth resident and Auckland Īnanga Spawning Project coordinator Sophie Tweddle was slated to have spoken at that talk but chose not to after it became apparent that the event being portrayed on social media as a protest gathering. Sophie judged, correctly, in the event, that few, in their indignation, would be in the mood to learn about the generic challenges of restoring īnanga spawning habitat. While the spectacle didn’t reflect well on many of the attendees, the Auckland Council officer responsible’s strategy of earlier choosing to not consult with those its knew to being diametrically opposed to removal of the Wilson Weir set up a confrontation that then played out, almost inevitably, at a Warkworth Town Hall Talk. 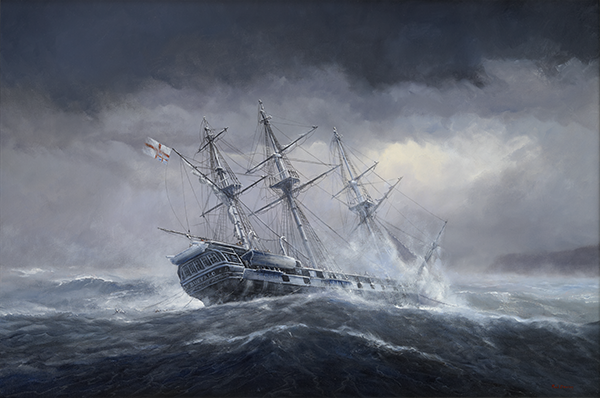 Haunted to Buffalo Beach: hmss Buffalo, having effectively driven Gordon Browne out of the Mahurangi, was herself subsequently driven ashore in Mercury Bay, near to were Browne had re-established. The Buffalo’s captain, his ship doomed, dragging its anchors shoreward in a storm, ran her onto the beach, with the loss of only one life. marine artist Paul Deacon

The Warkworth Town Hall Talks were conceived as an opportunity to better understand the Mahurangi, the universe, and everything. There is never any shortage of opinions, but truth tends to be the first casualty of any war with city hall. One repeated claim, which went unchallenged all evening despite the several ecologists present, was that the historic and continuing runs of whitebait to the foot of the Wilson Weir was proof that whitebait were successfully negotiating the weir and breeding upstream in the freshwater reaches, as their lifecycle requires them to do. Whitebait, or at least some species of them, may well have managed to scale the weir. But the flaw in the argument is that the whitebait that swim up the Mahurangi River to Warkworth haven’t necessarily begun life in that river system. While many species of fish migrate, of those that migrate between ocean and freshwater, very few return to their river of origin. Pacific salmon are one example. Whitebait are not remotely as particular. In spring, they respond, while offshore, to traces of freshwater sources, and instinctively follow those without the benefit of knowing whether the river system they are lead into doesn’t include some precipitous weir or natural obstruction that might thwart their quest for a freshwater reach in which to mature.

Whitebait have varying ability to overcome barriers such as weirs. Īnanga are capable of burst swimming, to get past obstacles, but lack the fin climbing adaptation, for example, famously found on the kōaro. The threatened giant and shortjaw kokopu are also useful climbers. Īnanga, however, make up the vast bulk of whitebait, so deserve better to be inadvertently made the easy prey of predatory species, particularly of Homo sapiens sapiensas opposed to Homo sapiens, to acknowledge Homo sapiens idaltu, and to avoid the more cumbersome alternative of ‘anatomically modern human being’, and for sheer cussedness. In light of these truths, it would seem likely that the Wilson Weir is a significant barrier to īnanga migration.

While the February debate—on reflection, it is gilding the lily to term it a debate, much less a discussion; harangue is probably closer—was short on truths, it did result, thanks to Auckland Council environmental services manager Gael Ogilvie, in the commissioning a study of the potential Mahurangi River whitebait habit upstream of the Wilson Weir. The findings will greatly assist in determining what measures might be justified in mitigating the weir’s impact, and it must be believed that there is at least one practicable option that doesn’t require the wholesale destruction of a cherished heritage structure.

But first, Thursday evening will provide those willing to learn an opportunity to better understand, as the Mahurangi Matters puts it, the secret life of the whitebait.