Climate action of the people, by the people for the planet 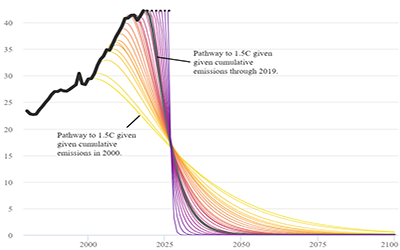 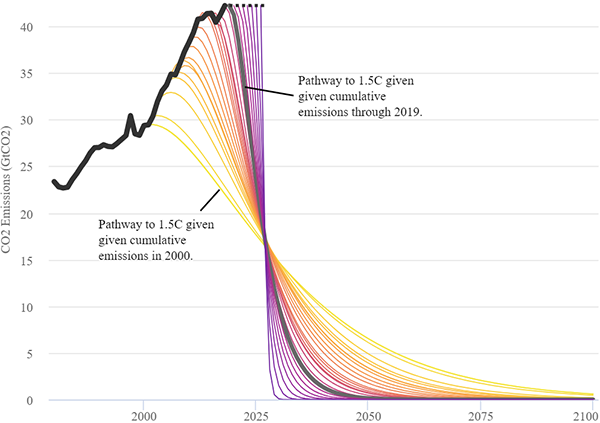 Impossibly Precipitous Pathway: Given that for all the warnings, and all the talk, including of nuclear moments, the world continues to increase its greenhouse-gas emissions, nothing short of immediate restoration of democracy and global climate-action mobilisation can be justified—the innocent, young and unborn deserve at least a fighting chance. Meanwhile, Australia is all too graphically demonstrating the results of a failure to mobilise. chart Carbon Brief

Despite Abraham Lincoln’s definitive closing Gettysburg words, government of the people, by the people for the people, has perished from the earth, placing all earth’s creatures in implacable peril.

Billions upon billions of creatures of all species, including human, are sentenced to die horribly of starvation and thirst, over the centuries that the climate becomes increasingly unsurvivable—all too foreseeably, the billion or more creatures destroyed by wildfire this globally-heated Australian summer may later be seen as being the lucky ones. This demands urgent, radical climate action. If the assault that is unfolding on Australia, or Jakarta, was being unleashed by a foreign power, the response would be massive and military.

Contemporary government of the people is no longer by the peopleto the considerably circumscribed extent it has ever been, by the people, much less for the people and their fellow creatures. Democracy has long since been utterly appropriated by the powerful, as demonstrated by Jacinda Ardern’s finance minister’s craven fiscal-responsibility assurances. The meaningful climate and social action craved by the people was promptly side-lined in the interests of ensuring big business that its interests would always come first. And now that it has come time for the triannual election bribes, it is the promise of billions to be spent on roads, for climate-compounding freeway cars and trucksapologies to Tom Waits, Ol’ ‘55, that Ardern’s party is banking on to win a second term. Meanwhile, in Aotearoa and globally:

Growth rates of the greenhouse gases driving global warming are increasing, not declining.

Had Aotearoa still voted with bad-old first-past-the-post, Labour would not have got a look in, in 2017. By being amongst the tiny number of democracies with a strongly proportional electoral system, Labour, with just under 37% of the vote, got to form the government. Labour pulled this off by embracing the county’s pariah party—New Zealand First. The price was the neutering of the Greens, with the net result that the climate-action can was kicked hard down the road, and into the Climate Change Commission long grass—the formalising the fiddling with greenhouse-gas-emission targets while the government builds more and more emissions-generating motorways. Meanwhile in the United Kingdom, the Conservatives, with that same 44% that New Zealand’s conservative party won, have been returned with a ‘landslide’ majority—in Aotearoa, mixed-member proportional since 1996 has mercifully relegated such, manufactured landslides to the history books. But while the electoral results are vastly different, what is no better is that both parliaments are utterly beholden to the powerful, not to the people. Neither will commence the immediate mobilisation that is needed to mitigate the global suffering that the 2019–2020 Australian summer is such a fearsome foretaste of. 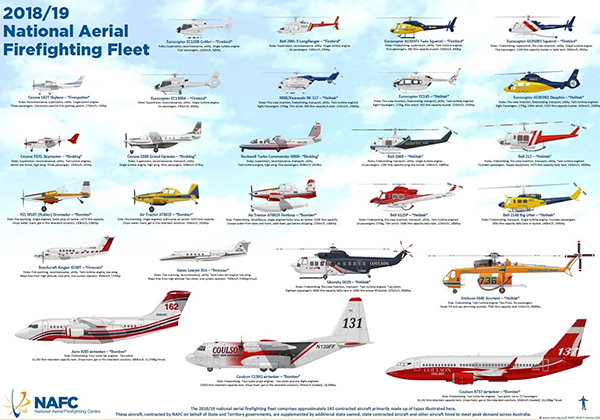 Putting out Fires: Clearly, putting out fires is just part of the response to an increasingly flammable global landscape. Provided that it is pre-emptive, as expensive as it seems, if the $4.4 billion economic impact of the 14-times-smaller Black Saturday fires is any indication, Boeing 737 maxs, at ~$100 million each… infographic National Aerial Firefighting Centre

With the possibility of the Black Saturday death toll of 173 being exceeded this summer, and its extent of 450 000 hectares burned already exceeded 14-fold, the perpetuation of the powerful guarding their interests ahead of people and a survivable climate is intolerable. That Australia’s federal government has been able, until now, to hold that the individual states were responsible for any deployment of large fixed-wing water bombers is an impeccable metaphor for the world’s failure to respond the anthropogenic global heating at scale. But while an Australian civil defence corps is clearly needed, even more so is a global climate assembly, operating a global fleetfleet, group, wing, or division aérienne of large fixed-wing water bombers.

The mounting victims of this vicious foretaste of future, year-round fire seasons can best be honoured by the people voting into power political parties unequivocally, incontrovertibly committed to immediate, unambiguous, comprehensive campaign finance reform. For, so long as big business can brazenly and legally finance big-business-compliant candidates, anything approaching actual democracy will remain a mirage—economic growth, for the sake of economic growth and obscene salaries and bonuses, will trump meaningful actions to salvage a survivable climate.

The absurdity, of course, is that the global climate-action mobilisation so patently disastrously overdue will absorb all the output of every honest enterprise interested tooling up for it. Companies incapable of imagining more than fuelling mindless consumerism might struggle, but such would be their choice alone. Those many who might blanch at the cost of climate-action mobilisation should reflect on the trillions blithely spent on propping up the financial markets. Post-2008 multi-trillion-dollar quantitative easing provided a windfall for fossil-fuel interests. Now, including to avoid climate causing another global financial crisis:

If the world is to cope with climate change, policymakers will need to pull every lever at their disposal. 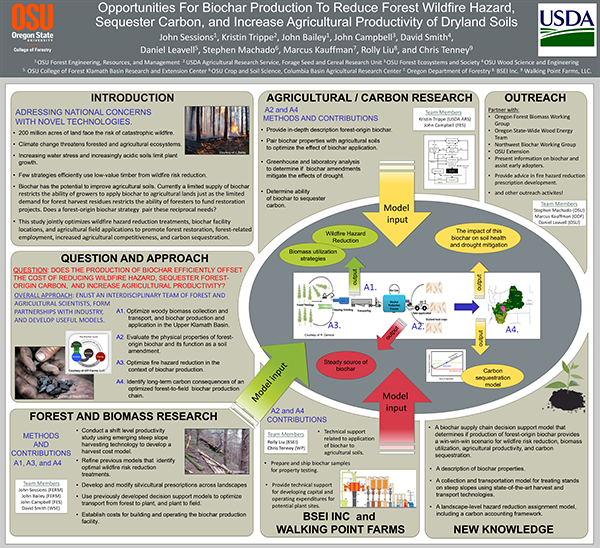 Rewilding Fires: As appealing a panacea as rewilding sounds, rewilded areas will be no haven from the ravages of global heating. Meanwhile, developing systems for wildfire-free reforestation at scale will take Manhattan Project-scale mobilisation, but such will be the cost of salvaging a survivable climate. Small price to pay for preserving a habitable Planet a. poster Oregon State University College of Forestry

…and much more. The levers pulled must be those that directly commission deep decarbonisation—the levers, for example, that commission the purchase of fleets of range-extended trolleybuses, and strings the catenary to grid-power those and fleets of hybrid trolleytrucks. Australia’s coal production is rising, having only dipped below 300 million tonnes oil equivalent per year once since 2014. Almost 15% of that fossil fuel is consumed by Australians, generating 60% of their electricity. And although an increasing, half of all Australians are supportive of nuclear power, the title of their House Standing Committee on the Environment and Energy’s report, Not Without Your Approval: A Way Forward for Nuclear Technology in Australia, the country is not exactly poised to dramatically decarbonise its electricity.

With the backdrop of Australia’s 10 million hectares of fires, the finding that there is room on the planet for an additional thousand times that area of planted forest is, disquieting. Simply rewilding will vastly add to Earth’s tinderbox landscapes. Had humanity buttoned off when still numbering a few billion, the natural landscape might have self-repaired. But looking at ~11 billion by 2100, mankind has so impacted the landscape and climate that it is in no position practicably—and certainly not, morally—to now suddenly adopt and hands-off stance. To date, the collective goal of human endeavours has been economic. Now it must be the salvaging of a survivable climate. Economics must serve society. Economies and economics are just some of the tools that must be deployed, to ease anthropogenic global heating.

None of this will achieved without energy, and lots of it. At-scale pyrolysis can convert the tinder for forest fires into carbon-sequestering biochar for an eternity, but if limited to using renewable energy, the scale of application of this miracle soil-enhancing agent will be negligible. Refusal to allow nuclear to power the quest to salvage a survivable climate is analogous to operating a mine with only one entrance—the lesson learned in Hartley, Northumberland, in 1862—casually repeated 148 years later at Pike River. Despite its vilification, at 0.04 deaths per terawatt hour, nuclear power is more than 4000 times safer than coal—nuclear is even 11 times safer than rooftop solar. Nuclear is currently not cheap. It was reasonably cheap when France demonstrated that a country could decarbonise its electricity in short order, but China, with initial help from France, is making up for lost time, by making solid progress with streamlining the deployment of at-scale decarbonisation.

Better Euchred than Nuclear Powered: To become suddenly parsimonious with energy just when all of mankind’s endeavours need to be switched from hedonistic consumerism to survival is astoundingly, collectively, hypocritical. Australia, at least, is far closer to an objective consideration of nuclear power than smug, ignorant Aotearoa. charts World Nuclear Industry Status Report | Mycle Schneider Consulting

Renewable energy proselytisers rely on scenarios of astringently parsimonious use of energy. Whereas, the heroic measures needed to salvage a survivable climate need massive amounts of fossil-fuel-free energy, and that means rapidly ramping up post-Fukushima, generation-iii nuclear power plant construction on a scale uncontemplated since the Liberty ship programme, post-Pearl Harbour. And development of generation-iv, and smrsmall modular reactor, technology like the heating planet depends upon it.

But, with the world burning and democracy beaten, bound and gagged in the basement, Thomas Jefferson’s words need to be being sung in the streets, every Fridays-for-Future Friday, until democracy is reclaimed: 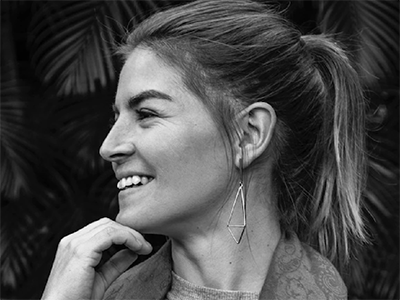 People Power: By denying the global economy the climate fodder that fuels it, young women can quickly convince the corporate world that there is a future for the productive corporations that rapidly retool to replace the existing fossil-fuel-predicated infrastructure with that which is zero-carbon. And even without a growing population, prodigious production will be entailed in resettling billions. Melissa Pappas, phd candidate, unsw. image Gold Coast Bulletin

Demonstrably, the prevailing form of government has become destructive, existentially destructive, and inimical to the safety of citizens, never mind the happiness of.

Climate action of the people, by the people for the only planet Homo sapiens sapiensas opposed to Homo sapiens, to acknowledge Homo sapiens idaltu, and to avoid the more cumbersome alternative of ‘anatomically modern human being’, and for sheer cussedness will ever call home!

Ultimate by-the-people climate action One Australian marine scientist, from the evidence of coral bleaching and bushfire proliferation, is reviewing her long-held intention to have children:

Studies show having fewer children is one of the most effective ways an individual can mitigate climate change. Choosing to have one less child prevents 58.6 tonnes of carbon emissions entering the atmosphere each year, according to a 2017 study. That’s like 25 Australians going car-free for the rest of their lives.

Governments can be condemned for their lack of meaningful climate action, but the impetus for an immediate near-total voluntary moratorium on breeding must come from the people.