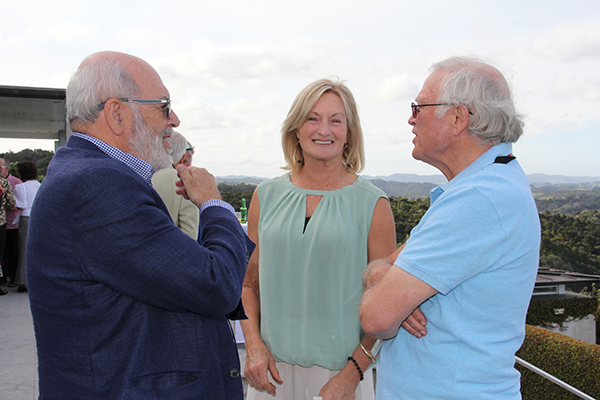 Cometh an Hour Earlier, Cometh Again the Man: Selecting a Sunday for the next Te Muri Crossing fundraiser at Tu Ngutu Villa suggested the hour-earlier start time—2 pm, and the opportunity to differentiate from November’s cocktail party by styling it a high tea. image Maree Owston-Doyle

One hour can make a world of difference. Arrive at the stream mouth 15 minutes ahead of the turn of a spring-high-tide high, and a leisurely sidestroke, beach towel aloft, will quickly have even the far-from-fit across to enjoy Te Muri’s sense of splendid isolation.

Forty-five minutes later, even an Olympic swimmer would not hold station against the concentrated, seaward estuary outpouring, for awfully long. But even outside the relatively brief periods that attempting to cross Te Muri Estuary can be hazardous, there are long periods, particularly in the winter, when Te Muri continues—given its regional park status since 1973—to be unconscionably inaccessible.

The one-hour earlier starting time for the Sunday 30 Mayoriginally published: 7 March. Postponed 12 weeks to allow for better planning and considerably more promotion Te Muri Crossing fundraiser has allowed it to be termed a high tea. Aside from it being an elegant alternative to a tendency to refer “the first cocktail party” and “the next cocktail party” or—post the event—“the last cocktail party”…