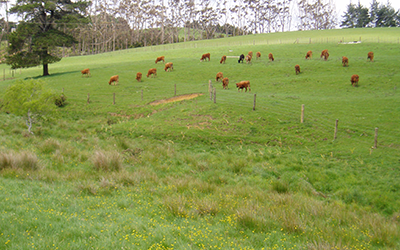 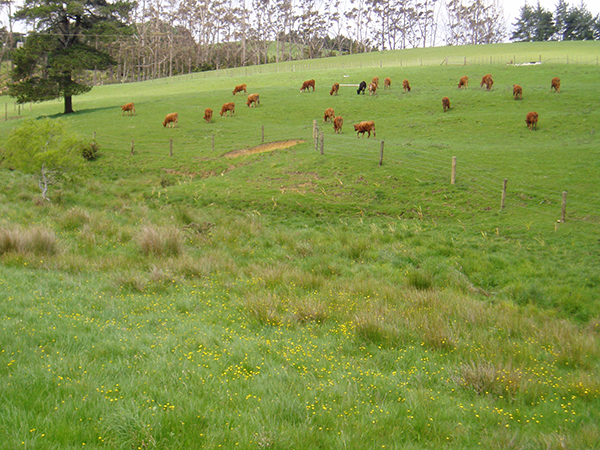 Officially, the West is East, but in practice it is neither, nor is it in the Mahurangi hydrological catchment, it being in that of Te Muri.

First planting day under the Mahurangi Land Restoration label appears to be an echo of the first under the $3 million Mahurangi Action Plan, in 2004, which piggybacked on a planting planned earlier, and under a different programme. In the September 2004 case, the planting was a trial of a low-cost riparian margin fencing and planting option for high-production grazing land. It was designed to be more appealing to dairy farmers concerned that a 20-metre margin either side of a stream would be too costly in respect to pasture lost.

Despite pioneering work prompted by the initial, 2004–2009 Mahurangi Action Plan, the cost of riparian protection, particularly the establishing of indigenous species, remains eye-wateringly expensive. Billion-tree plans have since come and gone, but, in a combination of runs-on-board preoccupation, and a failure to plan and build fit-for-purpose capacity that epitomises many areas of government failure such as affordable, accommodation, nearly two decades have not seen the needle move in that direction. Indigenous species should not be planted to the exclusion of exotic, which, in the form of radiata pine is stella for drawing down carbon. With appropriate processing and manufacturing, that carbon could readily be sequestered in accommodation modules with a useful life of centuries, and be exported globally. Instead, much of New Zealand’s prime radiata pine is sold to become boxing—climate-ruinously aiding and abetting the pouring of unprecedented quantities of steel-reinforced concrete. 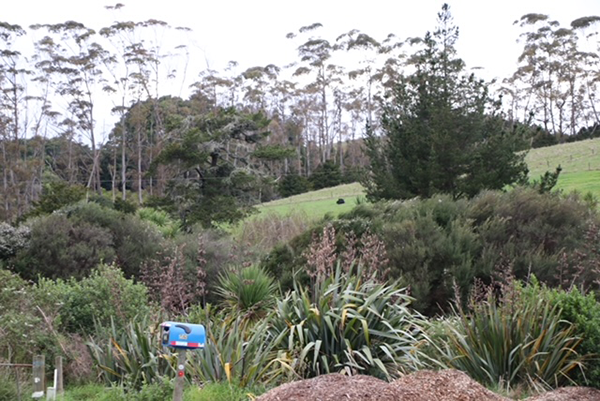 Sandspit Road Seventeen Years After: Almost eclipsed by the subsequent, 2007 open-ground indigenous species establishment trials, the near, northern side of the ephemeral stream gained a closer-to 40-metre, than 10-metre, planted riparian zone, when the opportunity availed to utilise the retired strip of pasture to trial the comparative establishment performance of forestry-nursery-raised indigenous plants with those raised by the common, nominally 10-times-more-expensive container-raised plants. Meantime, the growth of wilding pine, west of the mature tree featuring in this and the previous image, is an instructive example of the voracity of radiata pine to lock up carbon. image Gary Heaven

Regardless of cost, ecologically sensitive areas such as riparian zones are dead sitters for indigenous revegetation, given the urgent need to restore indigenous biodiversity. Most would also want to see planting in the treasured regional parks of Tāmaki Makaurau strictly indigenous. However, regional parks are precisely the place to reflect the existential imperative of putting climate first, and demonstrate how radiata pine can be planted, harvested and deployed responsibly. Good demonstration sites are extremely hard to come by. Private property holders, understandably, tend to value the privacy their land affords them, whereas parkland, particularly on the scale of regional parks, provides the perfect place to trial and showcase, best-practice climate-savvy land restoration.

The need to showcase climate-action mobilisation provides the excuse to segue to Monday week’s Mahurangi Regatta officers and commodores meeting. With 2022 being the 17-year anniversary of the revival of the Mahurangi Regatta Prize-Giving Dance, which was a direct result of Mahurangi Action being begged by the regional council’s project leader, to repeat the regatta ball held in 2004, to provide the opportunity to officially launch its $3 million Mahurangi Action Plan. Although the $5 million Mahurangi Land Restoration programme has enjoyed a salubrious official launch, at Mahurangi West, 29 January 2022 is an opportunity to introduce the project to a regional audience of thousands. Hosts of the officers and commodores meeting, the Royal New Zealand Yacht Squadron, also hosted the launch of the deeply disturbing sixth State of the Gulf report, which finally whipped the New Zealand Geographic into unapologetic, unbridled advocacy:

It was the 20th anniversary of the establishment of the Hauraki Gulf Marine Park, still New Zealand’s only national park of the sea. The event coincided with the release of the sixth State of the Gulf report, which summarises in a few neat pages the litany of failures, exploitation and incoherence that has led to the wholesale collapse of the one of the world’s most abundant ecosystems.

The Mahurangi Regatta prize-giving and dance, while generally being an entirely forgiving gig, is not without its challenges, which went unmentioned in the 2005 report of the Mahurangi Action Plan project manager:

Aboutas published 2005, Approximately, but that had to go along with the altogether too many council-speak acronyms 800 people visited the event, which proved to be an excellent vehicle to introduce the Mahurangi Action Plan to the wider community. During the day’s activities, which included the regatta, family beach events, the Auckland Regional Council’s Great Drain Game and a sustainable-land-management model, the organisers took every opportunity to make people aware of the Mahurangi Action Plan and the plight of their harbour. The action plan was also highly endorsed by keynote speaker Dr Mark Orams, director of the Sir Peter Blake Trust, who spoke on the importance of appropriate terrestrial and marine environmental stewardship and the fact that the Mahurangi was but one of possibly many harbours in New Zealand facing the effects of unsustainable land management practices.

The Prohibition Big Bandnow styled West City Jazz Orchestra easily rose to the challenge of surpassing sedimentation as the flavour of the day and provided some great entertainment and a classy finish to an altogether successful day.

The reality was that, burdened by a less than adequate public address system, Dr Orams only just held the crowd, and by the time the project manager attempted to provide some detail of the practical work in the catchment, the collective attention span of the assembled regional audience had been entirely exceeded. The shame is that the Mahurangi catchment story, in the context of the Hauraki Gulf is fascinating. As the regional council’s man had it, to the consternation of its scientists, the Mahurangi Regatta was in imminent danger of the becoming the Mahurangi Grand Prix. It was an entertaining line, but the science-based scenario, long before then, was even more darkly disturbing.

Although the phenomenon has yet to be captured by aerial photography, following an extreme rainfall event the greater Mahurangi sedimentation patterns are graphically on display. Mahurangi Harbour functions as a massive settling pond, whereas the adjoining Pūhoi and Waiwera rivers flush their sediment load straight into the staggering arms of the gulf. The Mahurangi, as it were, invariably takes one for the team. So much so that, for a time, the rate of sedimentation exceeded sea-level rise. Now, both are accelerating, but, sadly, with multi-metre sea-level rise already locked in, the harbour is set to become much deeper, and much muddier. The first to go will be the beaches. Many reading this, aside from dismissing the deeply unpalatable prognosis out of hand, will not live to see this first, tragic, and irreversible loss, but many of the children who will have spent a joyous morning participating in the perennial beach competitions will—and they will be excused for being less than forgiving of their grandparents’ obliviousness to the bleedin’ obvious.

Unless. Unless, spurred by the advocacy of the noble New Zealand Geographic, and sailor-heroes Pete Burling and Blair Tuke and other influencers, a gulf sea-change sees climate-action mobilisation take centre stage now, never mind climate-action-commission targets for decades into the future. Climate-action mobilisation, strategically, is the only way to convince the legions of potential pro-ute-protesters that serious greenhouse-gas emission reduction looks nothing like the current fetish for electric vehicles—unless the evs look like trolleybuses, trains and trams, and the infrastructure looks like Lake Onslow. Rather than promoting laws-of-physics-defying, battery-guzzlers, the deeply questionable climate commission should be addressing quite why some much of New Zealand’s productivity is private-not-so-light-vehicle dependent. The dots desperately need to be joined, to, for example, the aforementioned production of planted-forestry-based accommodation module manufacture, in high-cube shipping container format.

Meanwhile, while Sunday 11 July’s Te Muri land restoration planting might not epitomise every aspect climate-action mobilisation that needs to be showcased, it will still be very good for the regional park and another excellent opportunity to see Te Muri from its scenic ridge farm road. Departure point is Pūhoi Pioneers Memorial Park, Domain Road, Pūhoi, shuttles leaving at 10 am, for a painless two-hours of planting before being fed and deposited back at Pūhoi, but booking is necessary.

Gluttons for the euphoria that comes with weekend good works, and for the sense of splendid isolation Te Muri confers, by can also join the Friends of Regional Parks planting the day before, where access is via foot, across Te Muri Estuary—for those not game to risk their boots skipping across at the estuary mouth, packing a small towel is recommended…