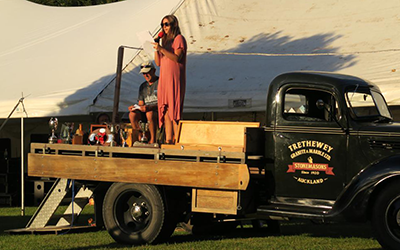 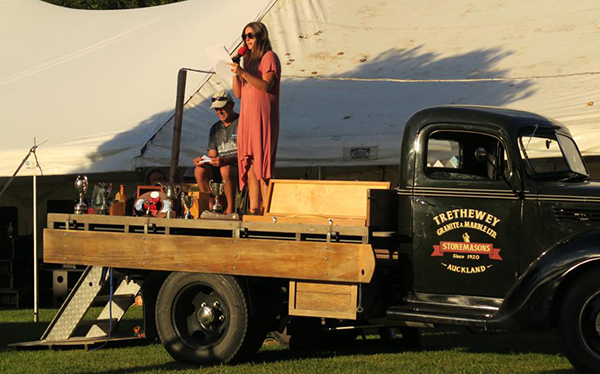 Last Summer to Save Te Muri: The last summer that was spent saving Te Muri from becoming another Long Bay was that of 2015–2016, when the bulk of the submissions supporting the Mahurangi Coastal Trail concept were signed at the Mahurangi Regatta. Here, captured in an in the appeared in the Guardian, Mahurangi Action president Tessa Berger kicks off that summer’s Mahurangi Regatta prize giving and dance. image Guardian

Already three years behind in its 10-year review, the draft regional parks management plan is now not due to be approved for release until November.

Submissions on the monumental—the current document runs to 504 pages—and monumentally important regional parks management plan will need to be written and canvassed over the summer break.

In recognition of the summer-break burden, three months, rather than the statutory two, will be allowed. Although the likely dates are yet to be revealed, the corresponding period for the variation in respect to Te Muri was 15 January to 18 March—the period having been extended in response to submitter pressure. It was this crucial, second phase of consultation that saw a reversal in Auckland Council’s determination to provide parking at Te Muri Beach.

Te Muri devotees, having seen off the primary threat to the sense of splendid isolation of their special place, will possibly not see the summer of 2021–2022 as nearly as important as that of 2015–2016. On the contrary, this management plan review is the first major regional parks planning process since Auckland Council declared a climate emergency. The destiny of Te Muri as a magnet for attracting private-light-vehicle-free regional-park access is intimately linked with the detail of how the planners have met their own criteria—that the plan must be climate-emergency-fit-for-purpose. 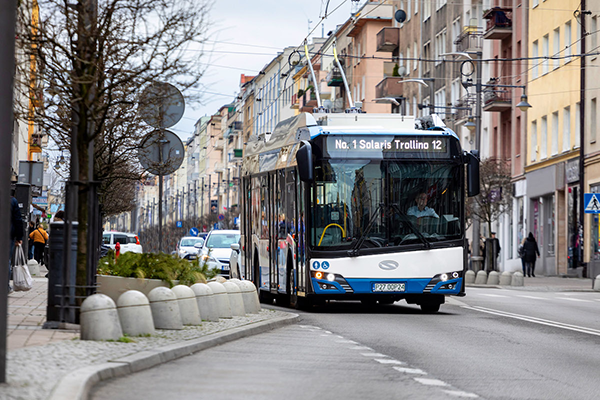 One or No Small Step for a Person: Even the one small curb-side step abord the Trollino 12, Trollino 18, or the 24.7-metre-long Trollino 24 is too many, given the efficiencies provided by building bus-floor-height bus platforms. As for double-decking urban busses, guaranteeing both potentially fatal falling injuries and loss of time boarding and disembarking—the latter being antithetical to reducing public transport journey times. Double-deckers are the darlings of private-light-vehicle-driving decision makers. Meantime, most of the journey to Te Muri would be grid-powered, was Auckland Transport to electrify its busways—a giant leap for humankind. image Solaris Bus & Coach

The first clue will be the treatment of access via Hungry Creek Road. Unless Hungry Creek Road is recognised as crucial to Te Araroa, the national walkway; crucial to walking, cycling and horse riding between Pūhoi and Te Muri; and crucial to Te Muri as an exemplar of access by other than private-light-vehicle; the plan will have failed, perversely, to pick some of the lowest-hanging fruit available. The current, incoherent plan is to upgrade Hungry Creek Road to a condition safe for a mix of walkers, cyclists, private-light-vehicles, and private-light-vehicle-towed horse floats. The civil-works cost of coming even remotely close to achieving that tall order has yet has to be quantified, and no realistic approximation of the timescale within it could be designed, consented and funded has been ascribed. Meantime, the clock will long since have run out on such egregiously fossil-fuel-dependent approaches to regional park access, well before any attendant budget materialised. The fact that in the 34 years since regional-parks-management-plan provision was made for it, that no funds have been found for a mere footbridge and boardwalk across Te Muri Estuary, should provide the necessary reality check on such uncosted policy-shonkery.

Entirely properly, at the 3 July drop-in day, Mahurangi Coastal Trail trustees were taken to task for advancing Te Muri Crossing without a concurrent plan for a joined-up trail. Although claims about ruination of the Mahurangi West Road—which, when the community first sprang to the defence of Te Muri was unsealed in its entirety—were both overblown and redundant, the locals were right about the core issue: There can be no climate-emergency-world justification for starting the Mahurangi Coastal Trail at the wrong, traffic-generating end. But nor should work on Te Muri Crossing be parked up. If planning for it began today, an off-the-showroom-floor amphibian ferry could be operating across the Pūhoi Estuary the day Te Muri Crossing is opened, with the mayor and ministers demonstrating the ease at which Aucklanders can reach Te Muri, via public transport. 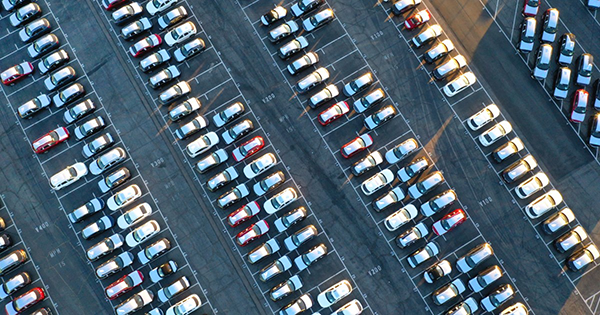 Disturbing Pattern of Private-Light-Vehicle Prioritisation: That a sizable chunk of civilisation in the 2020s was preoccupied with replacing a fossil-fuelled private-light-vehicle disaster with an utterly foreseeable battery-powered private-light-vehicle failure will perplex tomorrow’s victims of global heating considerably. image Carolyn Cole | Los Angeles Times

Tomorrow’s youth, on the frontline of sea-level rise, to name but one consequence of three centuries of fossil fuel use, will struggle to understand—much less, forgive—the three decades squandered by failing to put the brakes on this mother-of-all unintended consequences, and career past climate tipping points. Aside from France’s 1970s transition to nuclear power, examples of the necessary transition at pace and at scale are absent. Aotearoa, however, if it was to develop Lake Onslow pumped hydro storage to anything like its full potential, would have in place the foundation of a grid-electrification-of-everything programme, compatible with the laws of physics.

It is comically tragic that 21st -century billionaire-charlatans can prosper, by distracting the great energy-uneducated with demonstrations of captain-and-officers-first abandonment of Planet Earth for exciting worlds beyond. Tomorrow’s troops will struggle to understand why their parent’s and grandparent’s saw no excitement in being the generations that rose to the challenge of protect humanity and the natural world from so much avoidable, collectively self-inflicted, injury. A coastal trail commencing at Waiwera and culminating at Waipū would excite the citizenry of the adjoining metropolis. Spurred by the input of Mahurangi West residents at the 3 July drop-in, the immediate goal of the Mahurangi Coastal Trail Trust now is to open Te Muri Crossing and the end-to-end Waiwera-to-Mahurangi East coastal trail, on the same day. The million-dollar project will deliver climate, economic, health and social benefits at a ratio that will eye-wateringly exceed any roading project conceivable—short of building a decade’s backlog of electrified busways, in the same timeframe.

First-Purchased First-Whacked Wenderholm: Short of multi-million-dollar seawalls, which would merely delay the inevitable, the prime regional parkland at Wenderholm, and neighbouring Te Muri, is guaranteed to be inundated this century. Such parkland, for the period it remains usable, must be prioritised for other than facilitating the private-light-vehicle use that indirectly contributed to precipitating its loss. Wenderholm, in 1965, was the first of 28 regional parks purchased, once Tāmaki Makaurau gained regional governance with teeth. Post the 2010 subsumption of the Auckland Regional Council into the then new Auckland Council, there is no strategy or budget to continue the regional-park-acquisition-every-other-year achievement, which began with Wenderholm, that was the hallmark of Auckland regional governance for 45 years. image Regional Parks Management Plan Review | Auckland Council

Priority for the trust, now, is to have the end-to-end Mahurangi Coastal Trail designed and costed for inclusion in its submission on the draft regional parks management plan. This summer, the community needs also be reconvinced that the coastal trail remains the only sure way of preserving the signature Te Muri sense of splendid isolation.