Sediment as a resource – another way to skin the cat 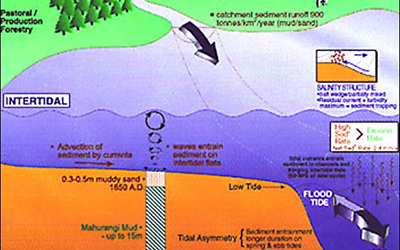 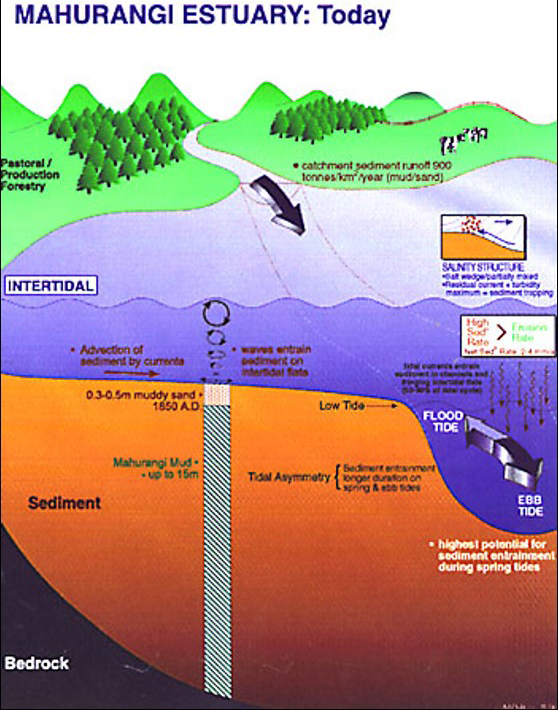 Topsoil of the Ages: The post-European accumulation might not look like much, but it has occurred over a mere century and a half and has resulted in much shallower, muddier, shallows. diagram niwa

It took some longer than it did others. At the community discussion of the Mahurangi Action Plan on 10 September, Warkworth resident Jefferson Chapple challenged the gathering to think of sediment as a resource.

Some believed they were already thinking of sediment as a resource. Peter Thompson, long-time champion of the river is prime mover of a plan to dredge the channel, including to ensure that his other charge, the reconstructed Jane Gifford, isn’t held prisoner at Warkworth on all but high water.

Peter’s latest concept, which he canvassed at the meeting, was to use the sediment to reclaim part of Dawson Creek for a golf course—the area had previously been proposed for a marina. Doubting that golf, as a use, would attract sufficiently broad community support, the challenge is to devise an alternative use with the potential to generate widespread enthusiasm, such as an Outward Bound-style island.

When the question of what alternative use was put to Jefferson Chapple, he reiterated his contention that sediment needed to be regarded as a resource, and when asked, did he mean as soil, he responded:

Soil might be perceived as a low-value product, but soil, in the US, is being lost at a rate 10 times greater than it is being replaced, and in India and China the rate is 30 to 40 times. David R Montgomery asks:

Should we be shocked that we are skinning our planet?

In the opening chapter of Dirt: The Erosion of Civilizations, Montgomery states:

An estimated twenty-four billion tons of soil are lost annually around the world—several tons for each person on the planet. Despite such global losses, soil erodes slowly enough to go largely unnoticed in anyone’s lifetime.

If valued at $50 per ton, that is $1.2 trillion—roughly the size of the bailout package. In conceiving trillions, few are more reliable than Russell Crow, and most will need numeracy up-skilling to cope with the numbers involved with the 2008 Wall Street Crash—the 1929 losses were a mere $30 billion, for the week that began the Great Depression.

Regardless of the global scale, the more relevant question is whether the Auckland region could afford the build the infrastructure to reclaim and market topsoil. Of course, the end product need not be dirt, it could be things growing in dirt, which could be anything from native grass turf, to instant raised-bed vegetable gardens, to established structure trees. Without utilising reclaimed topsoil, few products containing any quantity of it could reasonably be considered sustainable.

Aotearoa is a geologically young group of islands—younger even than was earlier held, having been pushed up from the drowned continent of Zealandia a mere 23 million years ago—and possibly never boasted the worldwide average of one metre of topsoil. And in spite of the only very recent settlement of these islands—between 1250 and 1300 ad—what little topsoil had been accrued has been totally lost in many places. Large areas of steep terrain within the Mahurangi catchment are devoid of pre- human occupation topsoil.

While much can be done—with smarter land-use and land-management practices—to minimise sediment generation, and to nurture topsoil creation, the topsoil that is now deposited in the Mahurangi river and harbour should be seen a resource rather than as a nuisance. If the sediment were to be extracted, washed of salt and processed into high value topsoil, the Mahurangi might be able to afford the strategic dredging it needs to remain viable for oyster farming and for navigation.

Maybe the answer does lie in the soil—or more specifically, in the sediment.