Last-minute changes cause to plan for celebration 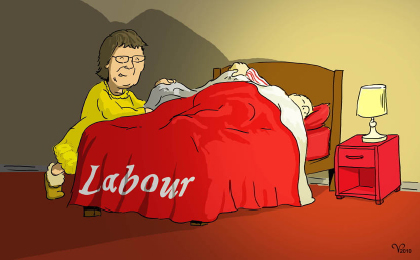 Desperate (Ex) Acts: ‘You know I don’t normally do this sort of thing.’ cartoon Majorlook Productions

…and, potentially, its worst enemies.

Individually, Aucklanders would turn Mahurangi into Mangawhai. Collectively, with regional governance, they will protect that value they and the locals hold dear: The sense of being a million miles from the metropolis.

The Mahurangi is poised to have the protection of a plan that will enshrine that goal.

The draft long-term Mahurangi Action Plan is a collaborative effort involving the both councils, and the community. It is well-positioned to be embraced by the staff and councillors of the new Auckland Council, following the inaugural elections in October.

But the mayor of Rodney’s recent roll of the dice could jeopardise all that. Without recourse to democratic process, the mayor has had a private member’s bill prepared and is currently claiming an unnamed Labour Party member will put it to parliament.

The bill seeks to make Rodney a unitary authority, thereby exempting the district from the rigour of regional planning. It also seeks to give the mayor an extra, unelected, year in office.

If parliament was to pull Rodney district out of the Auckland region, the long-term Mahurangi plan, which has been largely driven and paid for by the regional council, would languish. The best model for the future of the Mahurangi would then be Mangawhai, in the southern extremity of the Northland region where market forces are unfettered.

For good reason, the Auckland region has had regional planning since the 1950s. Without it, the urban sprawl would have despoiled much of Mahurangi and northeastern Rodney district.

Mahurangi’s initial good fortune was that local property holders were slow to subdivide into beachside sections. Then, thanks to the regional planning authority, the land most vulnerable to subdivision at the heads of the harbour was purchased for a regional park. The contemporary contribution of the rates-hungry local council was to create a carte blanche development zone for the land bought in the name of shipping magnate Anthony John Chandris, including a generous buffer to the east and west.

Fortunately Chandris’ Auckland agent, former Labour Party politician Philip Hollaway, harboured all the enthusiasm for the proposed development—hotel, motel, marina, and masses of vacation houses; the full catastrophe. His boss was less enthusiastic and the plans came to nothing; the zoning long-since rescinded.

Lady luck and regional planning have protected the harbourscape to date, but by establishing a plan that enjoys the passionate support of locals and Aucklanders alike, the future of the Mahurangi will not be left to chance.

The select committee decisions strengthening the region’s democracy announced yesterday are to be greatly commended. They are also a reassuring reminder that the Act Party is not the tail wagging the top dog, and that it is time to embrace the new governance arrangements and make them work well for the Mahurangi.