And the gulls circle near where Fairburn walked 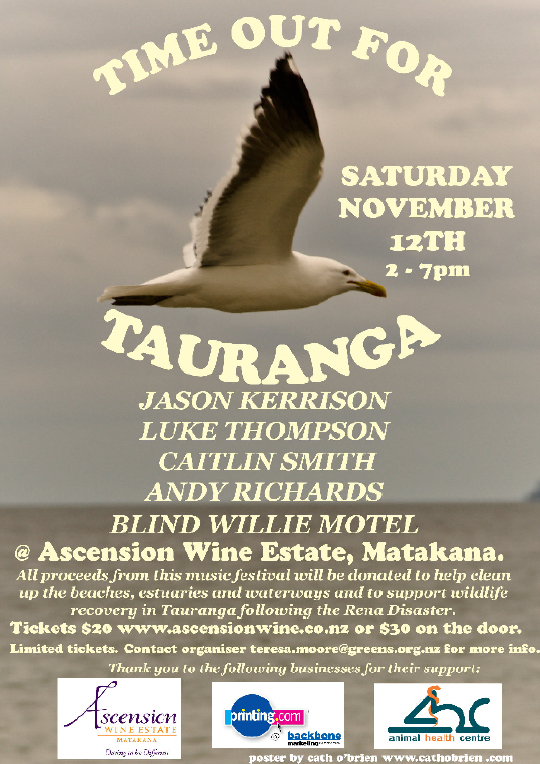 Gulls Circle Near: Flyer for the Time-Out for Tauranga charity music festival, proceeds of which will all be donated to clean up after the stranding of the Rena.

Achingly beautiful. Caitlin Smith’s recording is so striking, it is incomprehensible that Where Fairburn Walked didn’t become an Aotearoa standard. Be that as it may, the tribute to poet Rex (A‍ ‍R‍ ‍D) Fairburn was performed brilliantly by the Prohibition Big Band at the 2007 Mahurangi Regatta. The vocalist was local jazz singer Jennifer Eirena with the songwriter, Ross Mullins, on keyboard.

At the Ascension Wine Estate on Saturday, Caitlin Smith headlines a charity music festival, with all proceeds to be donated to clean up waterways and support wildlife recovery, following the stranding of the Rena. Singer songwriters Jason Kerrison and Luke Thompson feature, as do local acts Andy Richards and Blind Willie Motel—the name of which is surely a salute to Bob Dylan’s sublime tribute to, and curious pronunciation of, McTell.

And while it is unlikely Where Fairburn Walked will be performed on Saturday, the lyrics stand on their own: