Beginning to do it Justice: Although these snatched images don’t begin to do justice to Ron Locker’s vision for ‘about six lay-bys where visitors could safely drink in the scene’, the cause has received a major boost thanks to the generosity of the property holders paying for the felling of more than a dozen mammoth old pine trees. images Mahurangi Magazine

It was clearly going to be breathtaking.

The view of the Mahurangi Harbour, once the dozen or so big old radiata pine were removed to make way for the first comprehensive scenic ridge road lookout, overlooking Huawai Bay.

But, an unintended consequence is that, with the pine trees gone, many road users are finding that they are too preoccupied with the breathtaking abruptness with which the ground falls away from the edge of the seal to much enjoy the view. There were soon calls for a barrier to be erected. However, anxious to not contribute to a cascade of unintended consequences, the request to Auckland Transport to address the hazard included:

While a sight rail or armoured barrier would lesson the hazard for vehicles, the scenic ridge road is popular with walkers and a barrier would put these people at risk, unless a walkway was constructed outside of such a barrier.

It was suggested that, regardless of barriers or sight rails, prompt consideration be given to installing a warning sign and chevrons. The council’s transport organisation agreed, advising that chevron boards would be installed, likely by the end of January. In the interim, road marker-posts should probably be provided. At night, with now little to indicate the alignment of the road to drivers unfamiliar with it, the involuntary intake of breath could all too easily come as a vehicle veers irretrievably off its edge. 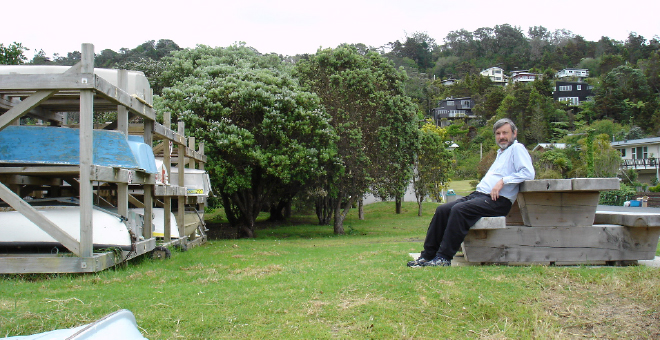 Superlative Publisher: John Timmins supported the Mahurangi Magazine from its inception in 2007 and formally became its publisher in 2010, insisting that the editor should enjoy total editorial independence. From time to time however, he would proffer that the magazine might explore a more suitable speed limit for the Mahurangi West Road. In a remarkable and poignant coincidence, the accompanying piece was written in the hours immediately prior to John’s suicide being discovered. image Mahurangi Magazine

The speed at which it was being driven would greatly determine the consequences for the occupants of a vehicle leaving the Mahurangi West Road at this or a number of other potentially unforgiving points. Like the majority of rural roads in Aotearoa, the nominal speed limit is 100‍ ‍kilometres‍ ‍per‍ ‍hour. However, the average speed, what traffic engineers prefer to call the ‘mean’ speed, is probably between 70 and 80 kilometres‍ ‍per‍ ‍hour. Roads are safer, particularly for cyclists and pedestrians, if there aren’t wide variations in the upper speed of vehicles. While most humans have a remarkable ability to judge the speed of an oncoming vehicle, not all do and particularly not younger children.

The rules around setting a reduced speed limit on a rural road are prodigious, reflecting the potential for unintended consequence. Some address the issue of average speed under current speed limit. The rules require that:

The mean speed and the 85th percentile speed on a road should not be significantly greater than the speeds specified in Table SLNZ3.

In plain English, assuming a 70-kilometre-per-hour limit was being contemplated:

In other words, if traffic currently travelled at anything approaching the current speed limit of 100‍ ‍kilometres‍ ‍per‍ ‍hour, it is most unlikely that a reduction to 80, much less 70, would be entertained. 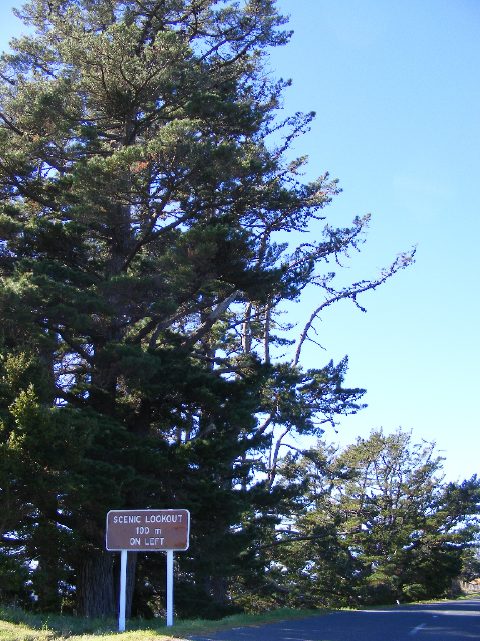 Sharing the Vision: Property holders Mike and Norma Neil were determined to share the view over their farm and protect, in perpetuity, a section of Mahurangi West Road that has escaped development. But first these pine trees had to go, with thousands of indigenous trees being planted a short distance away. (The lookout is nearer to 10‍ ‍metres than 100 from the sign, but that is another story.) image Mahurangi Magazine

To the layperson, the criteria for determining whether a 70 or 80 kilometre-per-hour limit would be appropriate for Mahurangi West Road are somewhat unclear. Currently Auckland Transport is in the process of imposing limits on a number of northern rural Auckland roads, some nearby. Billing and Fowler Access roads, for example, are to be reduced from 100 to 80 kilometres‍ ‍per‍ ‍hour, in order to synchronise their speed limits with those on adjoining state highways 1 and 17, respectively. In its explanation notes, the organisation states:

Part of determining the appropriate speed limit involves rating the road for numerous factors including the frequency of access points, pedestrians and halls. The Land Transport Safety Authority has a computer program into which the factors can be entered, however it is acknowledged that there will be ‘some rare situations’ where the program, and the rules underpinning it will not produce a sound result.

The difference in journey time between speed limits of 70 and 80 kilometres‍ ‍per‍ ‍hour would probably be about 54‍ ‍seconds, although it could feel considerably longer at the end of a long day and with a full bladder. The difference in journey time between the current open road limit of 100 and 80 kilometres‍ ‍per‍ ‍hour, assuming the vehicle was being driven legally in regard to the numerous corners with restricted visibility, would still be only a little more than a minute, but would require furious acceleration and deceleration.

As is all too common, no consideration whatsoever is given in the legislation regarding speed limits to the world’s singular clear and present danger: global warming. Aside from avoiding speeds in excess of about 80‍ ‍kilometres‍ ‍per‍ ‍hour where it is reasonable to do so, the greatest gains in fuel economy come from smooth driving. Thus, on the tortuous rural roads typical north of Auckland, it is unduly polluting to post an ‘open’ speed limit such as might encourage drivers, particularly those unfamiliar to the road, to accelerate to anything approaching 100‍ ‍kilometres‍ ‍per‍ ‍hour, between the bends.

In Jade River : A History of the Mahurangi, Ron Locker states that the Mahurangi West scenic ridge road is as important as the regional park it serves. Eighteen years since his death, thanks to property holders Mike and Norma Neil, Locker’s favourite vantage point is now being developed in earnest, hence the removal of the pine trees. Enjoyment of the scenic ridge road is significantly enhanced at lower speeds. It appears, however, that scenic consideration is not a specific factor in the speed limit setting rules.

What is a specific factor is a road’s crash rate. The crash that occurred relatively recently was at the sight where the chevron boards are to be erected. Fortunately for the driver, it didn’t appear to involve greatly excessive speed—the seven-wire fence and a massive radiata pine gently arrested the vehicle, averting what might have become a prolonged and deadly roll.

Because standing motionless is the optimum speed at which to enjoy panoramas of the Mahurangi Harbour, ultimately the scenic ridge roads need many lay-bys, after the ‘Locker lookout’ is developed.