Coastal path and the ferrymen 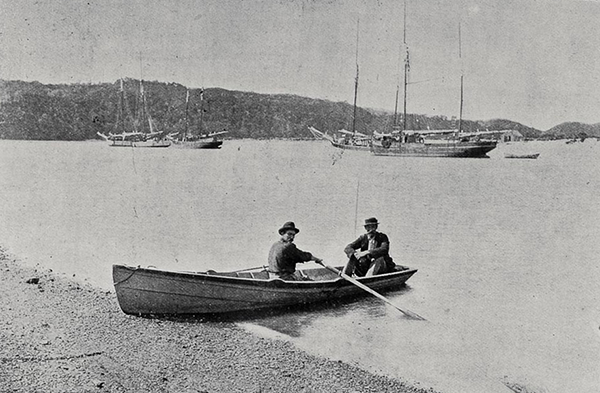 Reports of Rodney County Council meetings often mention ferries. (e.g. Weekly News, 8 December 1877; 2 March 1878). With the setting up of highways boards in the 1860s, there emerged a chain of ferries over the estuaries that obstructed coastal journeys. With a new eastern highway planned, the future of the ferries was in question. There were complaints that often travellers found the ferryman not in attendance, and that one had even refused to carry the mailman. Who should pay the ferryman was often argued in the newly formed County Council, with Councillor Krippner thinking:

…it strange that the control of the ferries should be in the hands of the Rodney Council, while the poor Road Boards had to pay the fiddler.

On 28 November 1877, the council decided to ascertain from the boards:

…whether the ferrymen have carried out their duties, and whether it is desirable to continue the ferries…

…and if so, the boards to pay. The council also instructed the chairman to take the necessary steps to dismiss the ferrymen regarded by the boards as unnecessary. The Rodney County Council agreed to pay half the cost of ferries for that year only. Mr Wilson noted that:

…the Mahurangi ferry was of no special benefit to either the Lower or the Eastern Mahurangi district, but to travellers generally from the North going to Auckland.

Apparently the Mahurangi Harbour ferry was considered dispensable. The Rodney County Council received a letter dated 4 April 1878 from the Department of Public Works, asking that the ferry at Mahurangi be continued at a reduced salary. Mr Wilson said “funds were quite inadequate to meet these demands”. Mr Farrand said “if the County re-established ferries on the eastern side, application would be made for similar services on the western side.Weekly News, 27 April 1878” This makes it clear that there had been a ferry across the Mahurangi Harbour. The busy shipyards probably added to the cross-river traffic. In 1876, the East Mahurangi Board paid their ferryman, WilliamFirst name kindly provided by great-great-great-grandchild, Robin Brütsch, 20 November 2020 McBrierty, £15 per year. The salary seems small, but perhaps he also collected from the Lower Mahurangi Highway Board on the opposite shore. Also, each passenger paid, the fee apparently going to the ferryman. At the Pūhoi, George Ryan’s salary was £20, and the fare was six pence; at Mahurangi, the ferryman is likely to have expected considerably more for a return row of two miles.

Wilson’s first remark makes it clear that there was a considerable traffic along the coast. Some originated from Mangawhai, or beyond. If one wanted to travel overland, the coast was a much more attractive proposition than the inland. Travellers would have crossed at the Sandspit and passed down the Mahurangi peninsula. I believe the ferry would have operated between Scotts Hotel and Ōpaheke beach or point. Depending on the state of the tide, travellers would probably have followed the shoreline, or Ngārewa Drive ridge, to Ōtarawao and crossed via Te Muri to the Pūhoi on an old Māori track (shown on the Ōtarawao deed). There, George Ryan, who lived at the Pūhoi mouth (and had earlier built ships there) would ferry them across. They would use further ferries at the Waiwera (run by Daniel Sullivan’s family) and another at Ōrewa.

Travellers might also have used a short-cut to Pūhoi, leaving the Mahurangi West Road just west of the school, following the divide between Te Muri and Hungry Creeks, and descending to the Pūhoi along the line of the present Hungry Creek Road. This route, still a paper road, was used by my mother’s generation for going to Pūhoi for dances, thirst quenching, etc. The Algie boys used to strip and swim behind their horses from Casnell Island to Ōpaheke Point, just to get to a dance at Pūhoi. Presumably, travellers on the ferry also swam their horses behind. Cattle were swum over the same crossing to the road end at the point.

Continue to next online published chapter »