Celebrating the 40th anniversary of the regatta revival by Mahurangi Action

Fairway Call: Not counting the crush of boats next door in Mita—pronounced meetuh—Bay, there are at least 150 craft anchored here in Sullivans Bay, on regatta morning 2016. So it is an open call as to whether the fairway that will be marked out next Friday afternoon, to connect with the inshore fairway customarily buoyed off (in foreground), to allow craft to parade by at close quarters, will take. photographer Jill Guillemin 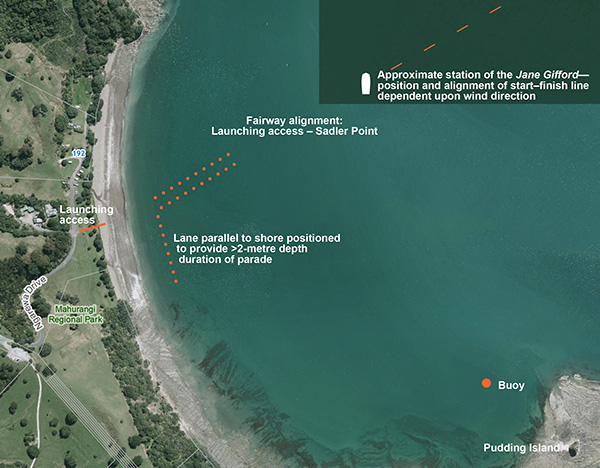 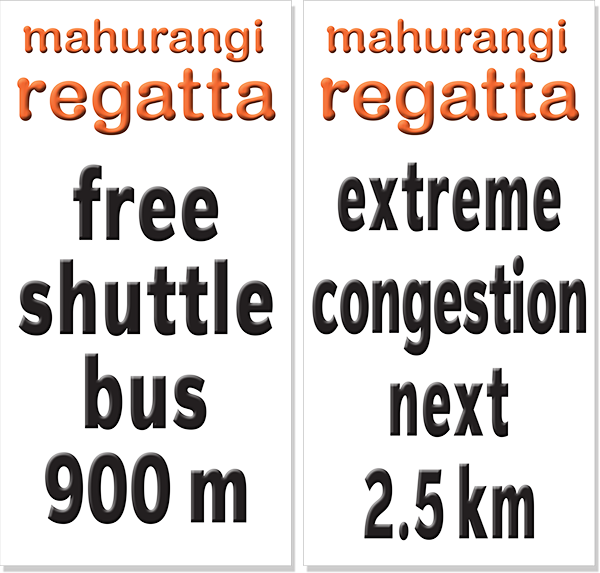 New Free Shuttle Bus Signs: While the free Mahurangi Regatta shuttle bus is an absolute hit with Scotts Landing locals, automobile-age Homo sapiens sapiens, generally, is severely resistant to being extricated from behind the steering wheel until provided with irrefutable visual proof that, incredibly, no parking space has been saved for sir. image Mahurangi Magazine

Revived by Mahurangi Action in 2004 in the form of a regatta ball as the grand finale of Warkworth’s 150th celebrations, then as a prize-giving dance, the traditional format, from the following year. In 2011, ex-tropical cyclone Wilma cancelled the regatta, and in 2012 a combination of mediocre weather and a lack of financial support precluded the event, but from 2013, largely thanks to the support of the Rodney Local Board, and from 2014 with additional help from Auckland Council’s regional events fund, and finally from 2016 thanks to the long-term commitment of a significant sponsor—Teak Construction—the future of the prize-giving dance, and the regatta itself, is now secure.

Free use of gas barbecues—no ‘bar and burgers’ since 2010
There is no longer a cash bar nor burgers for sale. From 2013, the format returned to that of the prize-giving dance that prevailed before the regatta lapsed during World War II, when it was on bring-your-own basis. This makes the event much less financially risky, particularly when wild and/or wet weather intervenes, as it did, spectacularly, in 2011.