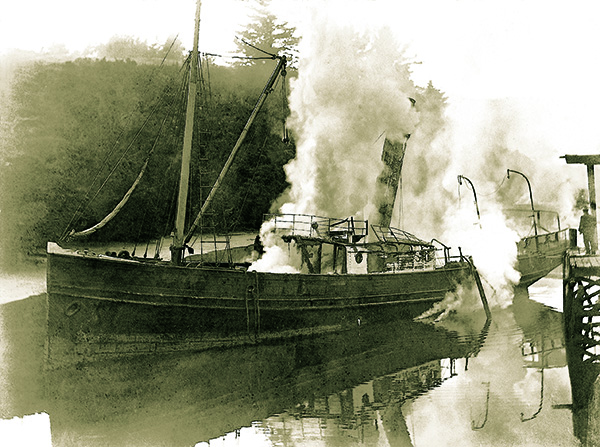 Fiery End Following Deadly Rivalry: Steamboat Kapanui burns at the Warkworth town wharf, 1909. Prior to this final disaster, she had twice collided with rival McGregor Steamship Company vessels: in 1899 in a collision with the Rose Casey while competing to pick up passengers off Rodmersham, Mahurangi Heads; and in 1905 when she was run down by the steel-hulled Claymore off Devonport Wharf, Auckland, drowning five crew members. By the time she burnt at Warkworth, the deadly rivalry had played out, with the struggling companies merging and then being bought by the Northern Steamship Company. image Warkworth and District Museum

The Rose Casey was bought late in 1888 by Alexander McGregor, who had just left the management of the Northern Steamship Company (which he had founded in 1881; see later). He kept her on her well-established runs, advertising at New Year 1889 improved services and weekend excursions to Hot Springs and Mahurangi. The McGregor Company in later years also used the Rob Roy, Māori, Claymore, and the Ōrewa.

Towards the end of the century, settlers were complaining about tariffs. They decided to challenge this monopoly by forming a company of their own, the Settlers Company, and commissioned from Logan junior, a nine-knot, 75-foot steamboat Kotiti. But dissatisfaction remained, and in 1898 a public meeting in Warkworth led to the birth of a new company, the Coastal Shipping Company, which absorbed the Settlers Company. Prominent local citizens figured on the board of directors. James Dunning, former shipbuilder at Mahurangi, became the first chairman; Henry Winkelmann, shipping agent, better known in later days as Auckland’s supreme marine photographer, was appointed secretary—his violin enlivened the board meetings in Warkworth.

The Coastal Company retained Kotiti and commissioned Kapanui, again from Logan’s yard. The company, and its rival, served the whole district, working the ports of Wade, Waiwera, Puhoi, Mahurangi Heads, Warkworth, Mullet Point, Takatu, Little and Big Omaha (i.e. Leigh and Whangateau). The smaller Kotiti was useful for negotiating the Puhoi, a role it continued to fulfil until 1924, under the Northern Company. It ended its days in less placid waters, disappearing laden with Westport coal for Foxton in 1931.

The larger, 100-foot Kapanui was capable of 12 knots, and managed Auckland to Waiwera in two and a half hours and Warkworth in three and a half hours. Both vessels had large ventilated holds for carrying fruit and other produce, and comfortable accommodation. Kapanui under Captain William Southgate, was to rival Rose Casey as the most famous of all the steamboats serving Mahurangi. The career of Southgate, son of Warkworth’s first publican, bridged two technologies. A builder of cutters in the 1870s, he later sailed in them, and at the turn of the century, made the transition to steamboat captain—Captain Kasper had also moved on from cutter skipper to steam.

Besides its schedules, Kapanui ran on excursions. It appears repeatedly in photographs of the day, leaving Auckland with its decks crowded by bowler-hatted men and ladies in crinoline, discharging day-trippers at Warkworth wharf or Mansion House, serving as flagship at the Mahurangi Regatta, and so on. It served under three flags. The company also bought the Kawau (another Logan boat of 88 feet) from J Hicks-Ross of Kawau in 1901, and had Kapui (60 feet) built by Lane and Sons of Totara North in 1902.

The company’s policy of employing local men, as far as possible, sent many young men of local families to sea. Of my mother’s brothers, two worked on the Kapanui, two worked for other companies, and two brothers-in-law were one a coastal skipper and the other an engineer. This was not unusual for Mahurangi, as the land could not support its large families, and many sons were keen to escape unpaid toil under authoritarian fathers.

The McGregor Company responded to the Coastal Company with a price war, and Mahurangi folk polarised into McGregor or Coastal supporters. Among the big customers, Nathaniel Wilson placed his cement with the McGregor Company, while Edward Morrison shipped the great output of Red Bluff Orchard by the Coastal Company—as a founding director, he could hardly do otherwise. The rival managing directors, Alexander McGregor and James Dunning, stomped the coast and the hinterland, addressing meetings, criticising each other roundly, on platforms and in the press. At a public meeting in Waiwera in 1900, both were present, and made offer and counter-offer for the Pūhoi service.

In 1900, both lines had new offices, each with their own wharf and shed in Warkworth. In that year, the crew of the Rose Casey presented Warkworth School with a flagstaff, and the crew of Kapanui, not to be outdone, presented a Union Jack and New Zealand ensign to fly on it.

Even the steamboats came to blows. The Kapanui and the Rose Casey collided at Mahurangi Heads while racing to pick up passengers off Rodmersham. Judgement went in favour of Captain Southgate, but the court warned that there was to be no more of such capers. On the night of 23 December 1905, the Kapanui was run down by the Claymore off Devonport wharf. Kapanui was stove in amidships and sank, drowning five of her crew. The event cast gloom over the Christmas season. My two eldest uncles were working one on each ship at the time. They had just swapped ships, because one did not get on with Southgate. The enquiry found the second officer of Kapanui directly responsible, but nevertheless Captain Southgate lost his ticket for a year, for “imprudent and negligent navigation”. His ship was refloated and repaired.

The Claymore had been specially designed to compete with the Kapanui for the Rodney trade. She was 210 tons and 113 feet long, the first steel ship to serve the Mahurangi. Commissioned in Glasgow in 1902, she was sailed to New Zealand as a brigantine, then unrigged. She was lengthened in 1910, and became a real survivor of the elements, mishaps and mergers. In the Second World War, she was used to salvage Niagara’s gold, and later to service the Waitematā Harbour defence boom. It was not until 1953 that she finally went to the shipbreakers.

In 1905 the common sequel of wasteful competition occurred. The Coastal and McGregor companies merged under the old name of the Settlers Company, no doubt looking over their shoulder at the ever-growing Northern Company. New competition was looming in the railway, which reached Kaipara Flats in that year, although there were as yet no decent feeder roads. The Kapanui continued the service, while the Rose Casey was sold south, finishing her career as a wreck on D’Urville Island in 1915.

It had been a bad time for the crews, never well paid for their long and irregular hours, and feeling the strain of scratching for cargoes in the face of fierce competition. The stokers made a little on the side when the Warkworth Footpath Improvement Society, in 1901, employed the stokers of the Rose Casey, the Claymore, and the Kapanui to put their clinker on the town wharf, instead of shovelling it overboard. This, with clinker from the cement works, provided the first surfaced footpaths in the town. It would have been a poor aggregate, but at least the toxic boron content would have kept the weeds down.

The new Settlers Company was short-lived. In 1908 it sold out to the burgeoning Northern Steamship Company, which had so far kept its distance, touching no closer than Mangawhai. The last phase of the steamboat era had begun on the Mahurangi.