Now the commission wants to explore

Lost Local Opportunity: When the ball was in the Local Government Commission’s court, it perversely clung to the status quo, and fumbled the opportunity Mahurangi Action had handed it on a platter, to create one local board for Warkworth-oriented part of the old Rodney County, and one for that which was once Helensville-centred, but which is now distinctly Kumeū-centric. Meantime, the commission is suggesting, rightfully, that Auckland Council consider funding locally-driven initiatives on an other-than per-capita basis. No better example of that is the dredging required to realise this visualisation. rendering White Landscape and Urbanism

At least Ōrewa is equally inconvenient for all Rodney residents.

In its case for twin local board areas, the Mahurangi Magazine pointed out:

So disparate are the areas, that meetings of the Rodney Local Board are held in Ōrewa, which is in neither half.

Now, belatedly, the Local Government Commission has caught up and recommends that the Auckland Council:

…explore the possibility of the Rodney local board office being physically located in the Rodney Local Board area. 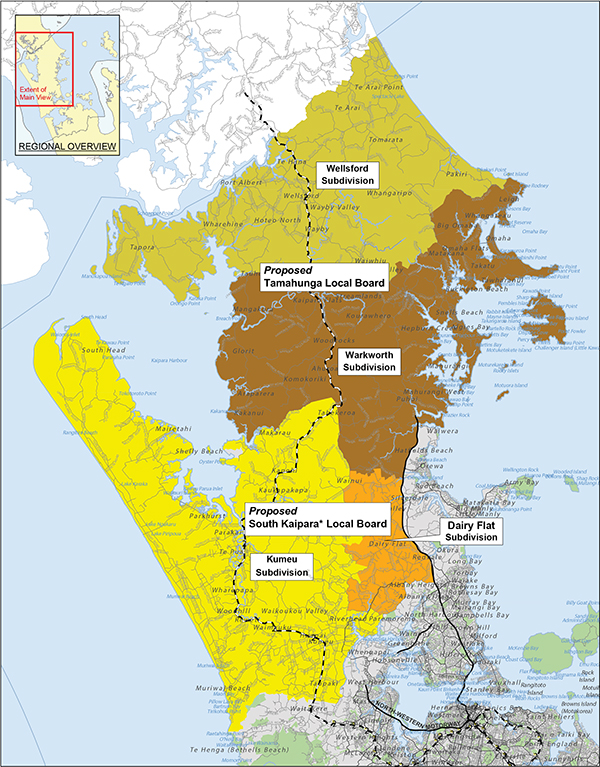 Way Ahead of Commission: Mahurangi Action’s solution for restoring the local in local government was deemed the only reasonably practicable option submitted. The Local Government Commission has only now acknowledged that having a local board headquartered outside of its local board area is an aberration, which it is now asking Auckland Council to address, despite, until recently, holding the solution in its own hands. map Auckland Council annotation Mahurangi Action

What the exploration will reveal is that Ōrewa, at least, has the beauty of being central, to a geographic area that otherwise shares little community of interest. The commission was provided with the solution by Mahurangi Action, in its June 2016 alternative application under Schedule 3 of the Local Government Act. The proposal, for two local board areas to replace the current Rodney Local Board area was the only concept to meet the reasonably-practicable-option criteria of the act. Despite this, citing the additional cost involved of two boards, the commission turned down the option in favour of the status quo.

In making its recommendations to Auckland Council on Thursday, the Local Government Commission chairman noted:

…others were concerned that the ‘local’ is being lost from local government.

Twin local boards, the sole reasonably practicable option proposed, would have achieved exactly that, but Sir Wira Gardiner and his fellow commissioners plumbed for the status quo, mandatorily defined as a reasonably practicable option, but in this instance an utterly perverse one. In recommending a Rodney Local Board office physically located in the Rodney Local Board area, it is intriguing to imagine where the commissioners had in mind. Short of locating it distinctly in one half of the disparate Rodney area or the other, such as in Helensville or Warkworth, Waitoki, population 5042013 census population and dwelling map, would appear to be the only remotely central location.

As wonderful a rural idyll as Waitoki could be, did it not straggle along State Highway 16 for a mile, the notion of Rodney as a useful geographic or political entity should long since have been put out to pasture. Kumeū and Warkworth are the hands-down winners in respect to critical mass, and centrality to their respective communities.

It is to be hoped that Auckland Council will respond to the commission’s more constructive extolments, for it to enhance local government for Aucklanders, such as:

…consider whether the current funding allocation method for locally-driven initiatives, on a largely per-capita basis, is the best way to meet the different needs of local areas…

The current big-ticket funding item for Mahurangi is the already resource-consented dredging programme for the Mahurangi River and Warkworth town basin. This would struggle to be funded on a per-capita basis, but the benefit is regional, not least of all to the region’s boating population for which a Mahurangi River expedition will be, for many, the highlight of their annual calendar.

Until 8 pm Wednesday, readers can click the button below to email their strong support for the consented dredging works to be included in Auckland Council’s 10-year budget, for immediate funding.