Boatbuilding begins in the Mahurangi 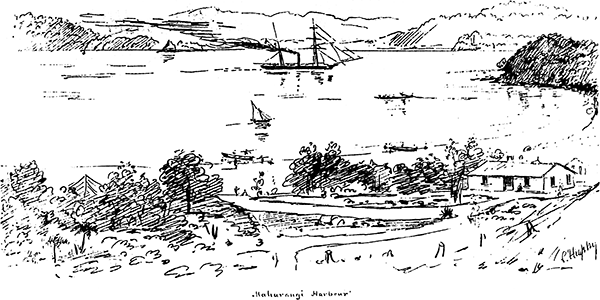 Way Ahead of Heaphy: Boatbuilding began in the Mahurangi far ahead of Charles Heaphy’s surveys, and his sketch of Scotts Landing, early in the steamboat era. However, no pictorial record exists of the inception of Thomas Scott’s first yard, in the foreground, or site of the building of the Post Boy, on the far shore—one of the first three European boats of her scale recorded as built in the harbour. sketch Charles Heaphy

Some of the first vessels to be built in the Mahurangi may well have gone unrecorded, since registration was a little haphazard in those times.

It is clear, however, that the first shipwrights established themselves after the Mahurangi Purchase of 1841 and before the first land sales in 1852. They moved in as squatters, presumably with a timber licence, and went to work. The first vessels of which I can find a record were three built in 1849: Scott’s cutter William, McDougall’s schooner Julia, and the schooner Post Boy.

The Post Boy was built for Auckland publican William Tulty, and went into the East Coast trade, bringing Māori produce and whale oil into Auckland. Its builders were: Charles Dyer, Henry Cowan, William Bradley, William Brown and George Jackson. Jackson was a shipwright who moved on to Pataua, north of Whangārei Heads, where he launched one more schooner, the Dolphin, in 1852. Brown may have been William Paine Brown, who the following year at the Bay of Islands launched the first of many schooners and cutters, becoming the most important builder at the Bay, with a grand total of 34 ships—his son William joined Thomas Lane to found the famous firm of Lane and Brown at Whangaroa, then moved on again to found Brown and Sons, the largest yard on the Northern Wairoa.

Henry Cowan, a sawyer, settled in Mahurangi and later made bricks. Philip Charles Dyer, “sawyer Maorangi”, and wife Eliza, baptised a son, William George, at Pitt Street Wesleyan Chapel in 1847. He had formerly worked for Daldy at Hellyers Creek. He left his name on Dyers Creek but moved on to become farmer and shipowner at Pakiri. With a brother he exploited the kauri there. William Bradley, former master mariner, became a temporary settler on Lot 89 (32 acres) in Cowan’s Bay, adjoining, but not including, Bradleys Point. He was superintendent of the school that ran there 1858–62. About 1865 he sold out and moved to the Riverhead district, later becoming stationmaster at Helensville on the Riverhead–Helensville railway.

A likely site for the building of the Post Boy is a tiny eroded flat where a stream emerges from the bush of the McElroy Reserve, just upstream of Cowan’s purchase of 1855. The main channel here swings in towards the bush, offering a good launching site. I have found pieces of old iron, pottery and glass in the mud there.

This team illustrates the mobility of the early boatbuilders. A shipwright could put all the tools he owned in a bag, and slinging it on his back, set off in search of new sites and partners. A team of two sawyers—who must work in pairs—and two shipwrights was a useful and common combination.

The McDougalls, apparently brothers, probably worked in such combination when with two others they built the schooner George and Catherine at the Wade in 1847. The schooners Julia, 1849, registered to Robert, and John, 1851, registered to William, were undoubtedly built by them both. The client was John Sullivan, who named his first custom-built vessels after his three-year-old daughter, and himself. They were almost certainly built on the north shore of the Pukapuka, near the McElroy boundary, where about 1855, Sullivan became the first owner of lot 83, and “J. Macdougal” of the adjoining lot 115. John MacDougall, was a merchant of Auckland and former shipowner: Bride, 1846–7; Brothers, 1847–8, and later a steamboat skipper, of the Lallah Rookh, 1869, and ferry Takapuna, 1873.

John MacDougall may have been the father of the shipwrights. If he ever settled in the Mahurangi, it was not for long. He had sold out by 1864. These two shipwrights do not appear again on the register.