Mahurangi mussels in to save the planet 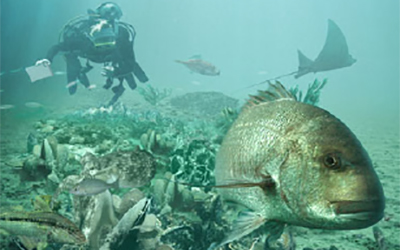 Text as published in the 2019 Mahurangi Cruising Club Yearbook 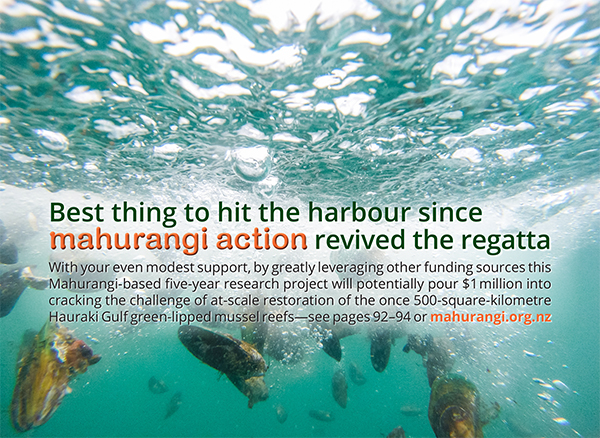 Grand Assault on Sediment: Provided that 333 are received, every $20-a-year-for-5-years subscription will generate funding of a grand $1000, towards a potential $1 million Mahurangi-based green-lipped-mussel-reef establishment programme, to help combat the harbour’s elevated sediment accumulation rate. And contribute to the science of determining a practicable means of mounting the mammoth task of restoring the more than 500 square kilometres of mussel reefs that were ripped out of the Hauraki Gulf mid last century. image Mahurangi Magazine

Green-lipped-mussel-reef establishment might seem an unlikely choice for a climate-change tour-de-force by the organisation that revived the Mahurangi Regatta 42 years ago this summer. But Mahurangi Action believes that the beauty of the project is three-fold—local action toward the global problem, the appeal of creating clear water, and the promise of establishing an enormous nursery for juvenile snapper—something to warm the heart of the hardest climate-change cynic.

The harbour needs the help of green-lipped mussel reefs to combat its elevated sediment accumulation levels. Thus, the project can help to focus attention on the urgent need to improve land use in the watershed. The highly erodible Mahurangi clay soils are already generating too much sediment and things could get much worse with the increase in intensity of extreme rainfall events generated by global
warming. It is not the normal levels of rain that fall relatively evenlythe six wettest, winter months are only two-fifths wetter than the balance of the year throughout the year that cause the problem. Rather, the deluges that on average once every four years create hugely smothering tonnes of mud to form in the harbour. One such event in 1985 generated eleven times more than the acceptable level—a staggering total of 121 058 tonnes of mud.

Those who propose that all efforts now to mitigate the effects of climate change should concentrate on just adapting to the changes are engaged in a high-risk strategy. Continuing fossil fuel use, even moderately abated, would render efforts such as green-lipped mussel reef restoration ineffectual. Mahurangi Action – by making climate its middle name – can help connect the dots between practical local action with, for example, the need for the electrification of infrastructure such as the Northern Busway, extended to Warkworth.

Auckland City Council has long since determined that our tide-head town which has taken 164 years to reach its current population of 5000 souls is to be a satellite growth centre and grow five times greater than its present size over the next 30 years. Most Mahurangi residents are appalled at this prospect, but if the town was designed as a model of walkability, and if the town’s rural boundary was made inviolate then actually a population of 25 000 people passionate about restoring their harbour could make a real difference. 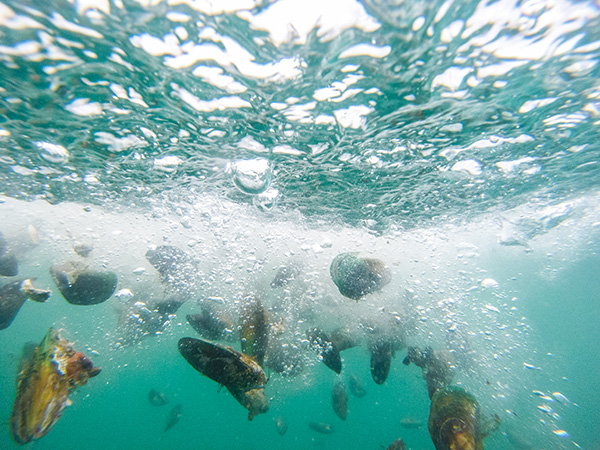 Mussels In: Beginning in 2016, 50 tonnes of green-lipped mussels had been deposited in five beds from Casnell Island in the Mahurangi Harbour, to Motuora. Then, a Warkworth Town Hall Talk by Dr Andrew Jeffs, in July this year, ignited a five-year, million-dollar mussel reef establishment research programme, with view to determining how the great Hauraki Gulf beds could practicably be restored. Clearer water allows sunlight to penetrate further, and power the carbon-dioxide consuming phytoplankton critical to marine life, and that, indubitably, of humanity. image Shaun Lee

Green-lipped mussel reef establishment which is already providing a habitat within the harbour for juvenile snapper is the sort of glimmer of hope that could impel people forward to fight for a survivable climate. But the restoration of some 500 square kilometres of green-lipped mussel reef ripped from the Hauraki Gulf will cost. During the last six years, 10 million mussels have been introduced. Given that 500 billion will be needed the cost could approach $50 billion. using current restoration methodology. The Mahurangi based programme first and foremost will be focused of the science of how to re-establish mussel reefs on a large scale, but within sensible economic bounds.

Re-cloaking the landscape is considerably cheaper to do with radiata pine than with native species – per hectare the difference is cost is about $28 000. Because of this and the slow growth rate of the native species, indigenous forestry has struggled to gain a toe-hold. Green-lipped mussel reef restoration costs about $60 000 per hectare using current methodology. So it is imperative to find an economic way to undertake the work. In the case of forestry, trials in the Mahurangi have shown that when indigenous plants are raised in forestry-style open-ground beds rather than in expensive containers, which is how they are normally raised, they establish just as well and at a much lower cost. We need to find some similarly more cost-effective way to undertake the restoration of the mussel reefs. 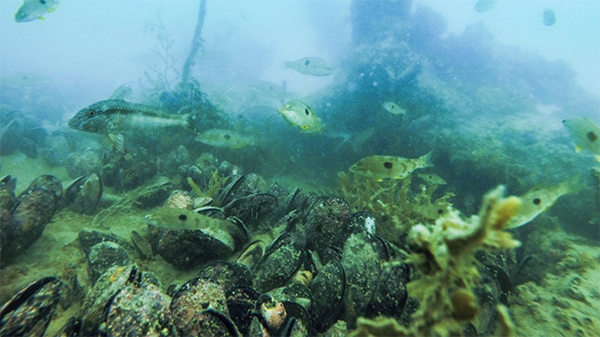 Future Mahurangi Harbour Seafloor: Initial trials have shown that even the Mahurangi Harbour with its elevated sediment accumulation rate can be restored by dropping farm-raised green-lipped mussels overboard, where they happily and co-operatively find neighbours to which to attach themselves. In turn, habitat is provided for goatfish, juvenile snapper, kōheru, spotties, and squid. The challenge for the community now is to devise an achievable programme for restoring mussel reefs in the Mahurangi and Hauraki Gulf at scale. image Shaun Lee

To support this, a philanthropist has stepped up with a commitment to back a five-year, potentially $1 million programme to support this research, provided that this commitment is well supported by the community. The initial target that Mahurangi Action has set itself is to sign up 300 people each of whom will contribute $20. Once the 300th person has been signed up, the total sum of $6000 will be augmented by a group of already identified ‘backers’. Increased again by our philanthropist’s commitment, this initial fund of money will then be used to ‘leverage’ outside funding, from organisations such as Foundation North’s gift Hauraki Gulf initiative. In-kind contribution and logistical support will continue to be provided by Mahurangi’s oyster farmers. 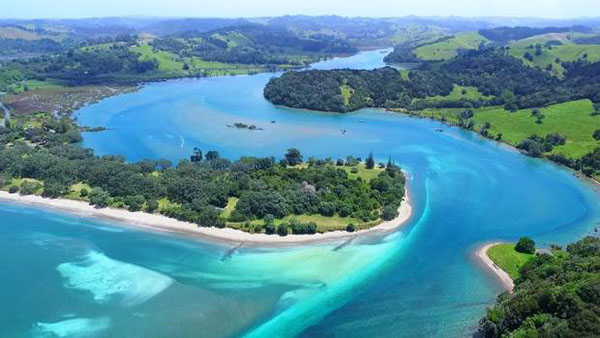 Car-free Te Muri Forever: Mahurangi Action’s other big project underway is the Mahurangi Coastal Trail. Serendipitously, the barge that was in the process of being designed by John Welsford to provide an interim service ferrying folk across the Pūhoi River Mouth, and across the Mahurangi Harbour of a regatta day, has now been respecified and enlarged so as to also serve as the mussel-reef-restoration research vessel. image Stuff

Planet Earth per se, of course, doesn’t need saving. Some would say that the Chicxulub asteroidany Deccan Traps contribution notwithstanding that rendered 75% of the world’s species extinct in or around 66 million years ago, was an event that contributed to the stellar ascendancy of Homo sapiens. But on its current, dangerous trajectory, humankind is working against its own self-interest and that of the biosphere. Will the future record a sorry series of self-serving short-sightedness or will it be a story of heroic efforts to give future generations and the natural world a fighting chance?

Mahurangi is a special place to many and is as good a place as any to enact meaningful climate action. It was the threat to the harbour posed by Warkworth’s inadequate wastewater treatment plans that first galvanised Mahurangi Action, established in 1974 as Friends of the Mahurangi. The solution it proposed, a combined treatment plant for Warkworth and the Mahurangi Peninsula with an ocean rather than a river outfall, will finally be in operation, a year or two before the organisation celebrates its 50th birthday.

Since the revival of the Mahurangi Regatta, Mahurangi Action has notched up some other significant successes. The first of these was the publication in 2001 of Dr Ronald Locke’s 416-page Jade River: A History of the Mahurangi. More recently in February 2017, the organisation was able to declare that Te Muri—the region’s New Chums Beach—will be forever car-free.

Central to the strategy of securing Te Muri’s sense of splendid isolation is the planned Mahurangi Coastal Trail. How to cross the Puhoi River has been the trail’s greatest trial. The visual impact of a 280-metre long footbridge in an estuarine area enjoying the highest landscape protection was deemed too great and instead, the suggestion of a council planning officer for a cable ferry has been enthusiastically embraced. Renowned small-boat designer John Welsford has worked up a preliminary plan, encouraged by the Mahurangi Regatta’s principal sponsor, Teak Construction.