Millrace to the rescue of whitebait and weir 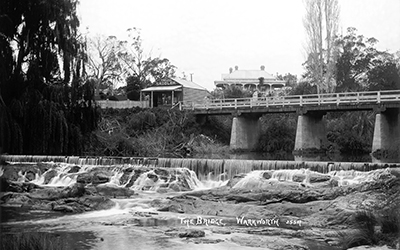 Being A-Weir of Opportunity to Leverage Heritage: Aotearoa, with its short, ~740-year of human settlement, needs to employ its few surviving heritage structures as a scaffold from which to construct a rich and authentic narrative for a less exploitative relationship with the natural environment. image Tudor Washington Collins

Millennia before human habitation, the natural sandstone weir at the Mahurangi River tidehead would have formed a formidable barrier to īnanga in their imperative to migrate from the sea to freshwater reaches.

Īnanga 500-Metre Marathon: John Brown’s half-kilometre millrace likely relegated the Mahurangi River īnanga to sink-population status, not that the founder of the tidehead town could have known that his diligent efforts to harness the small head and modest flow available would have had that effect. One and three quarters of a century later, however, there is no excuse to deny whitebait a ready means of moving to the fresh water essential for them to mature and breed in quantity. map Auckland Council

Then, over about the last 6000 years, towards its lower, westerntrue-left-bank, or Bridgehouse Lodge side, the river slowly succeeded in cutting a metre and a half vee in the sandstone, which gave all whitebait, not just the famously waterfall-climbing kind like the kōaroclimbing galaxias, a fighting chance to gain access to the 100 kilometres of freshwater stream above that exacting, natural weir.

This balmy whitebait nirvana remained unchanged until John Anderson Brown built, circa 1844, a half-kilometre-long millraceleat is possibly the more specific term to power his sawmill, situated on the tongue of land at the confluence of the Mahurangi River and its tiny Millstream tributary. Now, whitebait, after surviving the waterwheel floatsblades, paddles, were forced to sprint the rigorous 500-metre Mahurangi River sawmill millrace. However, once past that point, the balance of the journey could not have been a walk in the park, with every effort having been made by the millers to optimise the power available to the undershot waterwheel, which, although belatedly known to be much less powerful than overshot wheels, was the only option without a much higher dam than the, presumably wooden, weir constructed by John Brown. 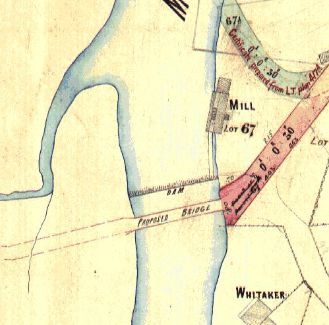 Short Swift Millrace: Although flourmill dispensed with the energy-sapping 500-metre marathon millrace involved with the earlier Brown’s timber mill, the 20-metre millrace from weir to wheel of the flour mill built by Palmer and Jakins, in 1866–7, would have been taxing enough. But life, for the common galaxias, was about to get much worse, courtesy of the Wilson Cement Works, and remain that way until the catch-and-haul required as a consent condition of the gauging weir behind the Mahurangi College. map Auckland Council

The subsequent mill, built on the opposite bank, and to grind flour rather than saw timber, possibly presented whitebait with a lesser challenge, given that its millrace was only a total of about 20 metres in length. But without knowing the height of the weir, built near the existing Wilson weir, and therefore the velocity, the degree of difficulty for the diminutive common galaxiasinagna can only be approximately estimated. Be than as it may, things took a turn for the worse 99 years ago when, to meet the needs of Portland cement manufacture, one nautical mile downstream, the Wilson Cement Works, previously content to churn out the more primitive lime cement, built the mother of all weirs. Now īnanga , in particular, were utterly stumped, and Warkworth became a whitebaiters’ El Dorado, with their sorely needed upstream freshwater reaches denied to them by their comparatively very meagre climbing ability.

But when the Wilsons bowed to the inevitable and relocated to what became known as Portland, Whangārei, where the limestone was both more plentiful, but, critically, was richer in calcium, the īnanga were left in limbo. Until, that is, a resource consent condition imposed on a much more recent weir, installed by 1982 behind the Mahurangi College to gauge the river flow, required whitebait to be captured and released annually upstream of the weir. But not only is catch-and-haul a costly and far from optimal means of providing īnanga access to those myriad upstream reaches, the gauging weir is to be replaced with an entirely benign means of measuring river flow, a decade and a half after a Mahurangi College intermediate student, who is today’s president of Mahurangi Action, first made it her Waicare mission to see whitebait migration restored.

Generally, weirs can be classified as unwitting ecological vandalism. Generally, the responsible option is their complete removal, particularly once they cease to perform whatever function justified the initial far-from-insignificant investment. Because not only do they typically have a devasting impact on indigenous fauna, the ecology of the unnaturally long, slow moving reach created is usually also suboptimal. But nor are weirs such as the Wilson Cement Works Weir devoid of heritage and amenity value. And while the removal of the Wilson weir has been canvassed, including at a Warkworth Town Hall Talk and at the Kōwhai Festival, and workshopped with the Rodney Local Board, rumour that the weir was about to be removed without further public consultation has a significant number of—and number of significant—locals highly exercised. So much so, that it is likely the Auckland Council will abandon its plans to restore the potentially significant habitat.

Hard-Won Zero-Carbon Energy: Graphically illustrating just how hard-won pre-fossil-fuel power was to harness, John Brown’s millrace, or leat, let water flow at a higher elevation from a natural rock weir, augmented in height by, probably a wooden, weir atop, 500 metres downstream past the natural tidehead weir to his sawmill. At the time, 1844, alternatives to animal and human power to saw timber in Aotearoa were few—it wasn’t until the 1880s, for example, that the small steam-powered sawmill is said to have definitely arrived, in Maine, United States. The alternative image is of the Mingus Mill leat, Great Smoky Mountains National Park that straddles the North Carolina – Tennessee border. Whether the Mahurangi River leat was similarly wood-lined along its half-kilometre length will possibly be known after some much-needed archaeological excavation. image Auckland Council | Wikimedia Commons

That increasingly likely outcome would be a tragedy, because nationally, and worldwide, whitebait in particular, and biodiversity in general, is having a very hard time of it indeed, with humanity having already precipitated the sixth mass extinction event, and the first since the Chicxulub impactor impacted 66 million years ago. It behoves the Mahurangi community, then, to very seriously explore the option of complete removal of the Wilson weir—the default gold standard of responsible ecological management.

However, all practicable options should be explored, and particularly, all practicable, creative options. Just one, some might say, creative option would be to build a multipurpose, latter-day ‘millrace’ carrying the bulk of the median river flow, designed to entirely, routinely navigable by īnanga . Then, to offset the retention of the half-kilometre of retained water, create a facility dedicated to whitebait awareness and research, in the general location of the flourmill, in an area where the existing buildings have had their backsides resolutely to the river for the last century and a half. The upper level could host what would instantly become New Zealand’s most visible and accessible whitebait restaurant, stocked from the local, world-leading Manāki Whitebait hatchery. Meantime, every practicable measure could be taken to maximise the ecological health of the half-kilometre reach, and to encourage its use to teach freshwater ecology and practical watercraft skills. 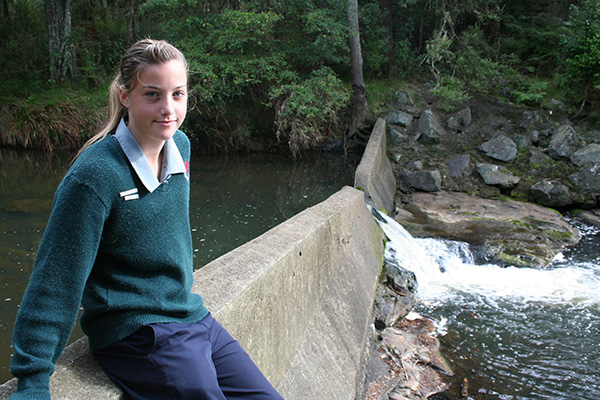 Determined Mahurangi Action: So determined, and so typically strategic, Tessa Berger, as an end-of-year-7 Mahurangi College student addressed the upcoming Waicare cohort regarding her finding that īnanga were being prevented passage upstream due to the regional council’s  v-notch gauging weir almost smack behind her classroom. Thirteen years on, the replacement for this particularly egregious example of state ecological vandalism, far less forgivable than the Wilson Cement Works structure built two thirds of a century earlier, is, apparently, finally scheduled for removal. image Mahurangi Matters

Nor should it be beyond the wit of Warkworthians to devise a wholesome way that the millrace could also serve as a summer waterslide and power an undershot wheel, even at the same time, but just not in springas published, confused spawning, in autumn, with run, in spring when the whitebait are running upstream. And run, they may well do, and not only thanks to the leg-up over the weir, and healthier stream ecology upstream. At least one whitebait expert welcomes the restoration of the town basin, by the Mahurangi River Restoration Trust, on account of the 111 000-cubic-metre-larger prism of saline water to entice whitebait to that point.

The flourmill-echoing whitebait research centre and restaurant, and millrace concept outlined here is only one of many alternatives to immediate removal of the Wilson weir. But nor would the trialling, or even implementation of a millrace-based or other solution, such as a lowerable barrage section, preclude the subsequent removal of the Wilson weir in part or in toto, in the future, sanctioned by unanimous community support.

Hardcore ecological activists may disparage such a people- and heritage-oriented approach, but people, and certainly the 30 000 Auckland Council plans to have living in the Mahurangi tidehead town—satellite growth centre—within a few decades, staunchly on the side of the whitebait, are exactly what īnanga need.