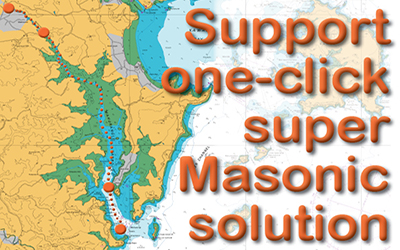 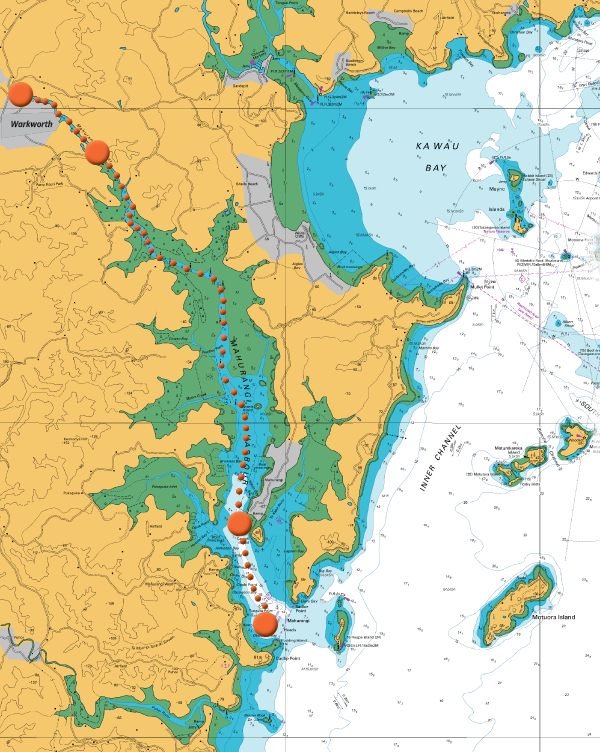 Connecting the Dots: Historically, the Mahurangi Regatta was one of Warkworth’s biggest events, with up to 200 townsfolk crowding aboard the Jane Gifford to Scotts Landing or Sullivans Bay—depending on which was the more sheltered. Today, the regatta is the best prospect for spreading the news that, providing funding is forthcoming, navigability of the Mahurangi River will be restored, and ‘Up the Mahu!’, will make Mahurangi a two-day event. The economic boost that brings will belatedly get every last Mahurangi business aboard the need to support the dredging, and to convince their political representatives that this once-in-a-lifetime opportunity to restore navigability mustn’t be squandered. Meantime, the Old Masonic Hall, opened to the Mahurangi River, would be the perfect platform for the West City Jazz Orchestra to put the finishing touches on the ever so genteel scene. chart Land Information New Zealand | annotation Mahurangi Magazine

Mahurangi Magazine has stuck its neck out by soliciting support for its suggested solution to the ugly butt of the Old Masonic Hall.

The timing was poor. Six days before Christmas meant that most folk missed the email and, as of this morning, only 30 had clicked the link to Drop-In Drops Solution to Old Masonic Derriere Dilemma. The use of drop in the idiom of produce, possibly proved problematic, but the Mahurangi Magazine stands by its assertion that it is imperative to open up the river-facing back blank wall of the hall to the Mahurangi River.

The danger now is, that unless the Rodney Local Board’s consultants receive a flurry of submissions this week, the lack of response to the pro forma could be interpreted as rejection of the concept. Thus, hung for a sheep as a lamb, the Mahurangi Magazine has added an option to its form:

I disagree with this concept; the blank river-facing wall of the Old Masonic Hall should be preserved for posterity!

The perfect illustration of the potential of having the Old Masonic Hall burst out into a large marquee embracing a gently terraced expanse of grassed river bank, is ‘Up the Mahu!’ On Sunday 27 January, the day after the Mahurangi Regatta, the first ‘Up the Mahu!’ flotilla will fill the town basin. As luck would have it, the tide is high at 1.10 pm, which is perfect for the inaugural Mahurangi Regatta as a two-day event. As a one-day event, the regatta makes a negligible contribution to the Mahurangi economy. But by 2020, when the town basin and navigational dredging is scheduled to be accomplished, the ‘Up the Mahu!’ day after the regatta deserves to be an annual event, complete with the West City Jazz Orchestra arrayed across the river-facing end of the Old Masonic Hall, and the local ballroom dancing exponents providing the finishing touches to the aesthetic.

Mahurangi is at a unprecedently critical juncture. The work of Peter Thompson and the Mahurangi River Restoration Trust, after decades of determined planning and preparation, is poised to restore the navigability of the Warkworth as a tidehead town. ‘Up the Mahu!’ is the natural opportunity to signal to central government and council politicians that this is what Aucklanders want for their Mahurangi.

The urgent action however, over the next several days, is to support the super Masonic solution to that bad, blank riverbank wall: