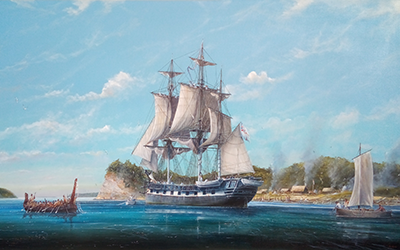 Making History Missing Festival: The first known depiction of Gordon Davis Browne’s spar station has been completed in time to be included in the fullest account yet published of the man who established the region’s first European settlement, eight years before Auckland. Appropriately, given the dire impact she had on the enterprise when she arrived in the Mahurangi Harbour two years later, in 1834, hmss Buffalo dominates the scene. marine artist Paul Deacon

Pictorially, at least, hmss Buffalo off Gordon Davis Browne’s spar station will make a fashionably late arrival to Auckland Heritage Festival 2019, which concludes at the end of Labour Weekend. Given that Browne’s Mahurangi spar station was the first European settlement in the Tāmaki Makauraute reo Māori for Auckland. The Mahurangi Magazine advocates just Makaurau, for the wider Auckland region, but Aucklander for its citizens region, and the depiction by marine artist Paul Deacon is the first known to have been attempted, it represents a unique contribution to the region’s pictorial record.

The possibility that the work could be included in the festival was briefly entertained when the Nelson-based marine artist commissioned to depict the naval storeship Buffalo off Gordon Davis Browne’s spar station, Paul Deacon, advised Mahurangi Action on Monday that the large, 1800 by 1012 millimetre, oil painting was complete. But in no circumstances would the commissioning syndicate have suggested the 5 October festival start date be the deadline for the work, particularly when a much more important potential deadline was not stressed at all: the printing of Bob Moxon Browne qc’s history that inspired the commission. Moxon Browne’s quest for images to illustrate the chapter of his soon-to-be-published book on the brothers—one of who, Octavius, visited Gordon twice in Aotearoa, and from who Bob is directly descended—highlighted the absence of any depiction of Gordon Davis Browne’s establishment. The brothers putatively include Phiz, Charles Dickens friend and illustrator, 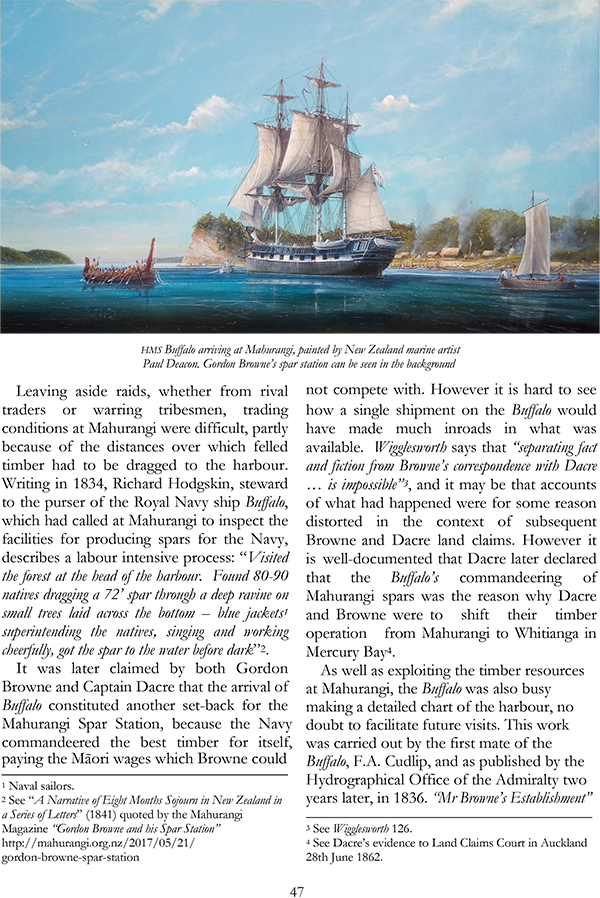 History-Embargo-Breaking Buffalo: Although she missed the Auckland Heritage Festival, nor was this first-ever depiction of hmss Buffalo off Gordon Davis Browne’s Mahurangi spar station due to appear. Much more importantly, the study made it in time to take a starring role in Bob Moxon Browne qc’s about-to-be-printed history of the talented family that included the prolific Hablot Knight Browne, aka Phiz who illustrated more than 200 works including those of Charles Dickens’, for 23 years. image Bob Moxon Browne

Although the settlement was short-lived—for which the impact of the 1834 hmss Buffalo visit was only one of myriad reasons, and a recurring Mahurangi Harbour theme—its story is a rich stepping-off point for exploring the European-settlement phase of the Auckland – Tāmaki Makaurau region. It is hoped that it will contribute to the journey many New Zealanders are beginning, to better understand the country’s generally poorly comprehended history. Much was missed by colonists preoccupied with their own future, who found the lack of any evidential written history literally carved in stone as evidence of absence, particularly of purposeful ocean voyaging skills on par with their own. It follows that Paul Deacon’s attractive, brave-new-era depiction must be hung in a place readily accessible to the public, in the Mahurangi—besides that being the explicit condition Bob Moxon Browne made when agreeing to be the commissioning-syndicate foundation member.

The Warkworth Town Hall will initially host hmss Buffalo off Spar Station Cove, if that is what the work is to be named—a longer, more descriptive title might be: hmss Buffalo arriving off Spar Station Cove, Mahurangi Harbour. Ideally, the long title would reinforce that the Buffalo has yet to anchor, in a location with substantially deeper water, farther downstream in the direction the tide is carrying her, in the depiction contrived. Be that as it may, the study will spend its first week in the town hall, curated by a roster of Mahurangi Action members. The work’s next big outing will be the Mahurangi Regatta, on Auckland Anniversary weekend, displayed in Scott Homestead, but its first home, as such, will very possibly be the Warkworth Hotel currently under comprehensive restoration ahead of a projected mid-April 2020 opening.

The commissioning of the Buffalo – Spar Station Cove depiction highlights the paucity of choices for displaying locally significant works of art, or art in general. For a decade or so until the early 2000s, the private gallery Arts Desire in Neville Street, Warkworth was the next best thing to a public art gallery. When Warkworth’s chronically cramped public library is finally extended, replaced or otherwise supplemented, an art exhibition space must surely be created—Warkworth mustn’t wait until it has Blenheim’s population of 32 000 before it can boast of something approaching the bare necessities of a civilised town. The bleedin’ obvious solution, of course, is to repairto indulge in Pattern Language parlance the glaring architectural travesty that is the moronic blank, back, river-facing wall of the Old Masonic Hall. To insist that this unrelieved weatherboard abomination is sacrosanct because of the building’s Category 2 listing, is the triumph of hard-line heritage-building ideology over architecture, imagination, and respect for society and its built environment.

Regardless of where Paul Deacon’s depiction is hung long-term, for Mahurangi acolytes at least, it has already made history—Bob Moxon Browne’s.