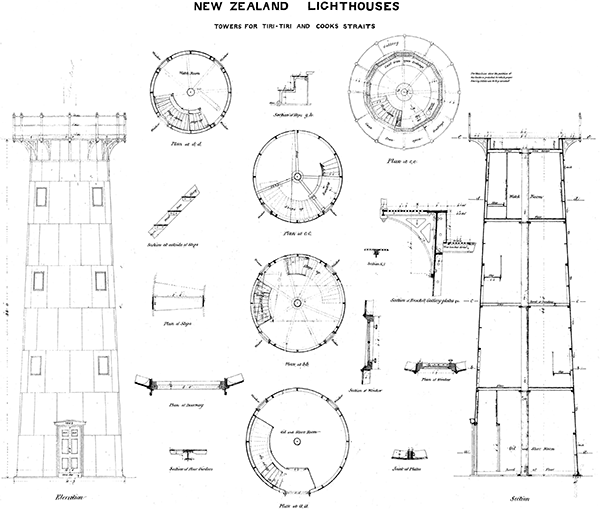 Sailing for Similarly Unlit Islands: When shipwright John Darrach sailed his family for Aotearoa aboard the brig Pākehā in 1863 they left astern Prince Edward Island’s one—improvised—light, at its North Cape, for a colony that had not long built its first permanent lighthouse, at Pencarrow Head. Next lit, Tiritiri Matangi, began shining into the Mahurangi Harbour from 1 January 1865, followed by the heroic Scottish marine engineer James Balfour’s iconic Bean Rock cottage-lighthouse, first lit 24 July 1871. Tiritiri Matangi’s sister British-prefabricated cast-iron tower was apparently commissioned for Cook Strait, but instead spent a couple of years on Mana Island before being dismantled and reassembled at Cape Egmont. drawing McLean Stilman

The next two shipbuilding families on the Mahurangi Harbour, and the most notable, shared a common ancestry.

The names Darroch and Darrach are but variant spellings of the same name. They represent a clan in Argyll of Clan McDonald of the Isles. The family pronunciations of the name, respectively “Darrock” and “Darra” have strayed from the true Scots, and should both end with a guttural “-gh” sound, as in “loch”.

The Darrochs came from Kintyre, the peninsula enclosing the outer Firth of Clyde. George Darroch called his homestead at Marriage Bay, Cantyre, which is the spelling given the peninsula in my Bartholomews’ Atlas of 1912.

The Darrachs came, via Prince Edward Island, Canada, from the 139-times smaller island of Colonsay, northwest of Kintyre.