Part 2 Māori use and settlement of Mahurangi

Sculptured hills and headlands of Mahurangi 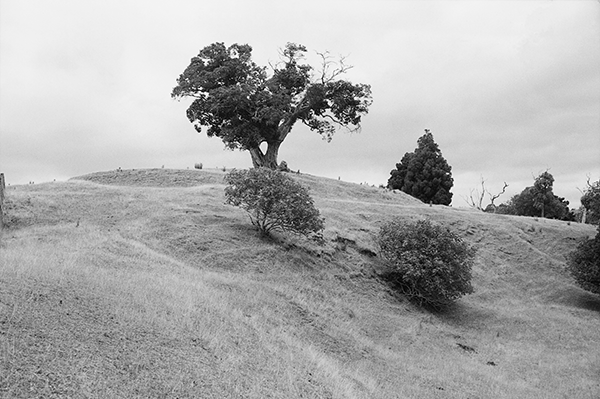 Due to be Best Viewed from Te Muri Crossing: Due north of the proposed Te Muri boardwalk and footbridge, this pā site boasts multiple terraces on its southern flank. image Shirley Whittlestone

Terraces, ditches and pits, so prominent on the headlands of the Mahurangi, remind us that this peaceful harbour had a turbulent past:

Māori were not constantly at war, but they did live with the constant threat of war. This fact of life is literally carved into the New Zealand landscape. In the upper North Island in particular the remains of Māori pā are clearly visible on precipitous headlands and hilltops near the coast. Māori developed the art of fortification well before arrival of the Pākehā and the musket.

Mahurangias published 2001: It. Mahurangi substituted following the insertion of the preceding quote, March 2021 had to be defended repeatedly against alien wakaas published 2001: canoes, nosing in with predatory intent, or war parties from the inland. The builders of these earthworks have long been forgotten. The fact that almost every promontory at the Mahurangi Harbour is terraced, suggests that they were not all fortified at once, but represent a succession of works over a long period. An individual site may have served a succession of defenders.

Headland pā are prominent enough, but there are others as noteworthy. Undoubtedly the most spectacular in the district is Pukematekeoalso known as the Sugar Loaf, close by Matakana Road. Its rows of terraces, draped in tiers down the imposing crag, are best appreciated from Whangaripo Road, approaching the saddle. Above the end of Ngārewa Drive stands a well-preserved ring-ditch pā, crowned by an old pōhutukawa. It is probably of an earlier era than the headland pā. We have found three other pā in our wanderings, inconspicuous, but of great interest. The north end of Saddle Island has a buttress, rising to what is still the highest point. A well-defined defensive ditch cuts the buttress near the top. This is clearly the last trace of a strong pā, destroyed by retreat of the cliffs. Motuora has a strong pā at its southern end, but its extensive earthworks are now buried under gorse and kikuyu. The freshwater stream of Dyers Creek takes a u-bend before dropping over the waterfall into the tide. A pā crowns the hill in the bend. It is a small but strong position, probably seen as a good refuge because of its secluded position at the head of a long tidal creek. It may well have served as such in the time of Hongi Hika. Our most recent and intriguing discovery is the shoreline pā at the neck of the McElroy peninsula, facing up the middle reach of the Pukapuka. Protected by minor cliffs and a very deep ditch across the ridge behind, it is remarkable in having a deep ditch dividing the citadel into two. It is said to have been of great interest to visitors from the Auckland Museum.

Such a harbour as Mahurangi could hardly escape notice. The Tāmaki Makaurau isthmus had been a tribal crossroads for centuries before it became a capital. Just a day’s journey away by canoe, it was too close for comfort. Local lookouts watched nervously as the great waka passed northwards or southwards, and more nervously when the crews camped nearby for the night, or to wait for better weather. Te Hemara Tauhia and others, in a claim for Tiritiri Matangi in 1867, said it was usual for war parties of all tribes travelling along the coast to camp at the island, and to bury their dead there.

The number of pā also testify that the residential merits of the Mahurangi were valued: a sheltered haven, abounding in seafood, backed by a forest food resource. If the soils left something to be desired, the climate was favourable to crops. The sites where people lived and gardened are less conspicuous than the forts, but no less important and more numerous. Felton Mathew wrote of the Warkworth basin in 1840:

Above the falls, the ground rises in a series of gentle and beautiful undulations covered only with fern.

His description reflects the impact of Māori gardens over the years, constantly shifting in search of new fertility. Fern-root was a more important article of food than kūmara, and the fern beds needed to be constantly rejuvenated.

Dr Janet Davidson, who has studied the archaeology of the area, noted that an archaeology student on a preliminary survey of Mahurangi West added 80 sites to the list. So far limited archaeological resources have been directed elsewhere. Although no site in the Mahurangi has been excavated, nor any carbon dating done, it is clear that this productive waterway supported substantial communities, with cultivations on the flats and gentler slopes behind the beaches and mangrove hedges.

Much of the history of the local Māori has been lost in the turmoil of the last tribal wars, and in the withering of their communities in the first half century of Pākehā settlement. But their story covers by far the greater part of human occupation of the Mahurangi. The Pākehā has lived here for just over a century and a half; Māori for a millennium.

The pre-European history of the Mahurangi can only be understood as part of the wider tribal history of Northland, which is better recorded. For that reason, the scope of this chapter is far broader than might be expected in a local history.

Essentially it is the saga of Te Kawerau, the earliest remembered tangata whenua of the Mahurangi: their struggle to survive the pressures of Ngāti Whatua from the inland and of Ngāti Pāoa from the Hauraki Gulf, and the final terrible onslaught they all suffered at the hands of Ngāpuhi, bearing the weapons of the Pākehā. After the Treaty, they faced their last, but no less deadly challenge: the advance of European settlement.

Continue to next online-published chapter »