High tea and then high time for community crossing engagement 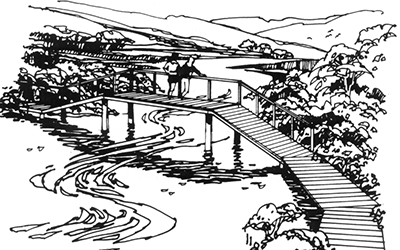 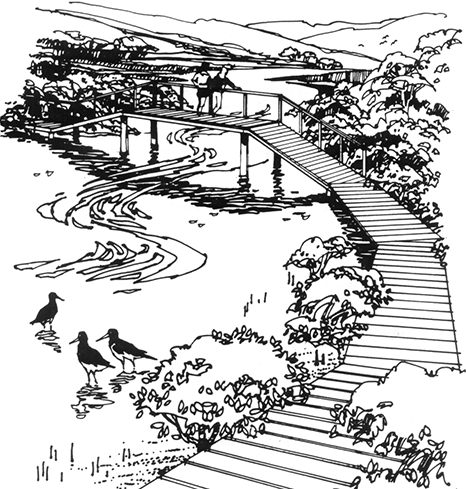 Charmingly Underestimating Crossing Challenge: Promoters of the Mahurangi Coastal Trail in 1987, in hindsight, significantly underestimated the challenge of constructing an upper Te Muri Estuary crossing. Meantime, prior to the community pulling the rug from under the project, the regional authority had commissioned geotechnical work, visualisation renderings, and, presumably, construction drawings, to build a concrete road bridge across the estuary to a parking facility for 4000 private light vehicles behind the beach. Despite the much smaller scale of the footbridge the community had called for at every regional-parks-management-plan opportunity presented, the regional body still hadn’t found budget or inclination to build it before being subsumed by Auckland Council, in 2010. artist John Cole
image Mahurangi West and Pukapuka Residents and Ratepayers Association

Transparency, in a democracy, should be the default behaviour that is only departed from rarely, rather than routinely.

Thus, it is a relief to report that, come next Sunday’s high tea at Tu Ngutu Villa, Mahurangi Coastal Trail trustee and coastal engineer Craig Davis will be free to describe the planned Te Muri Crossing route, its construction, and steps taken to date towards incorporating cultural elements in the design of the footbridge, the boardwalks either side, and their immediate approaches.

Following November’s cocktail party at Tu Ngutu Villa, as much as attendees hugely enjoyed the afternoon, more than a few went away frustrated that they didn’t know exactly what was being planned. Although the then newly produced photo-visualisation was on display, aside from emphasising that the crossing would be all but invisible from where folk currently ford Te Muri Estuary from the end of the farm road, it didn’t provide a good notion of the route or construction.

The route of the planned crossing, in fact, is close to where the community, in February 1987, suggested it should be, except that the southern boardwalk, rather than traversing the low-lying estuarine island, now crosses 50 metres farther upstream. While it is entirely human to head for an island—estuarine or otherwise—the sighting of at-risk–declining moho pererūbanded rail in the reeds there, more than vindicates the respectful, farther-upstream siting.

For some, of course, regardless of how far upstream the crossing is planned to be routed, their opposition to it will not be mollified. For them, Auckland Council has no business making it easier for other people to visit their special place. Regular readers of the Mahurangi Magazine will be spared reiteration of why that expectation is unreasonable, albeit utterly understandable—had Te Muri not become regional parkland in 1973, it would long since have been developed as an old-style quarter-acre, kerb-and-channel coastal settlement. And while regional parkland is carefully managed to protect and enhance its ecology, its coastal margin was purchased from an unwilling vendor under the Public Works Act 1928, for the passive recreational needs of the people, not just of Mahurangi West, but of regional Tāmaki Makaurau. 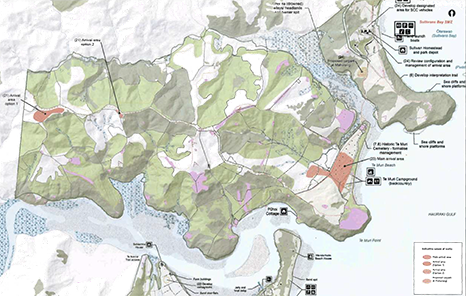 Roundly Rejected by the Community: Had it not been for the determined opposition of the community, spearheaded by Mahurangi Action, the sense of splendid isolation that is Te Muri might have been lost forever. This was the second time the community, which in 1987 was led by the Mahurangi West and Pukapuka Residents and Ratepayers Association—secretary Cimino Cole—saw off the threat. The key on both occasions lay in convincing the council that walking access was more appropriate than private-light-vehicle access. Regarding the residual notion of parking on the northern slopes of Te Muri Estuary, the next opportunity to oppose that is when the draft regional parks management plan is released sometime later this year. concept plan Auckland Council

Ironically, considering how little was communicated about the planned crossing at the cocktail party, another criticism subsequently levelled was that members of the community who were unwilling or unable to stump up the $80 ticket price also deserved know what was being planned. It was, nevertheless, a valid criticism,the Mahurangi Coastal Trail Trust is to host a drop-in day, provisionally scheduled for Saturday 19 June, in the Mahurangi West Hall. Tentatively titled Te Muri Crossing Community All-Day Coffee and Croissants, the object is to allow folk to seek answers to the aspects of the crossing that concern or interest them, and to record their support or objection to any or all aspects. Auckland Council officers will be invited to present the council’s policy and plans concerning the planned crossing during a one-or-two-hour-long session, at a time that will be notified if the offer is taken up. Outside of that time, Mahurangi Coastal Trail trustees will make espresso and keep the warmed croissants coming, and answer questions about the trust’s plans.

Generous supporters not trustees, who cannot attend, have donated three tickets to the 30 May high tea at Tu Ngutu Villa. In the further pursuit of transparency, these are being offered to any person referred to above, that is, who is unwilling or unable to purchase tickets, but is concerned to know what is being said at the fundraisers about the planned Te Muri Crossing…