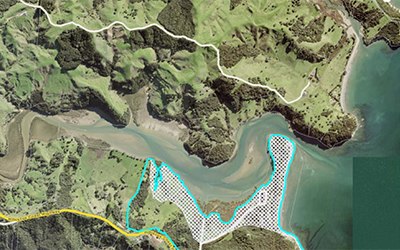 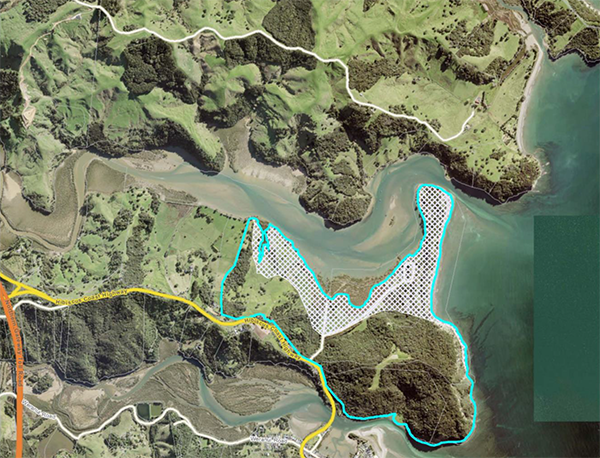 Not everyone supports the proposed Te Muri Crossing. Nor does everyone who supports the proposed Te Muri Crossing, support every aspect of it. For example, many Mahurangi West people would have preferred that development of the Mahurangi Coastal Trail began at the Waiwera end, so as not to generate even more vehicle movements on Ngārewa Drive, a section of which is one-way.

A few would prefer no Mahurangi Coastal Trail at all. The sense of splendid isolation that Te Muri has retained since before its coastal margin became regional parkland in 1973 has become the cherished taonga of generations of its mostly Pākehā visitors. But, when it was purchased for the people of Tāmaki Makaurau, and of Aotearoa, 48 years ago, the die was cast. From that point forward, it was not a matter of if access would be facilitated, but how.

The preconceived plan, half a century ago, was to link Wenderholm to Mahurangi West with a scenic coastal road. Fortunately, however, when work was due to begin on road access a decade and an oil crisis later, the appropriateness of building a scenic coastal road to link regional parkland had been revisited. Road access would be provided from the end of Ngārewa Drive, crossing Te Muri Estuary at its widest point, to a 4000-car car parkalso remembered as a 4000-car proposal beside the beach. As has been oft written, Mahurangi West locals responded in absolute unanimity, contending that the far preferable access option was a walking-access-only one. In the aftermath, Mahurangi Actionestablished 1974 as Friends of the Mahurangi implored the regional parks management to record the pivotal change in strategy, and the community’s role in it, in the Mahurangi Regional Park management plan document.

The fear the issue would resurface in the future proved all too prescient. When the 383-hectare Te Muri hinterland was acquired, in 2010 providing legal road access, to Hungry Creek Road, the plan, from the first media release onward, was for private vehicle access, and parking for thousands of vehicles, adjacent the beach. 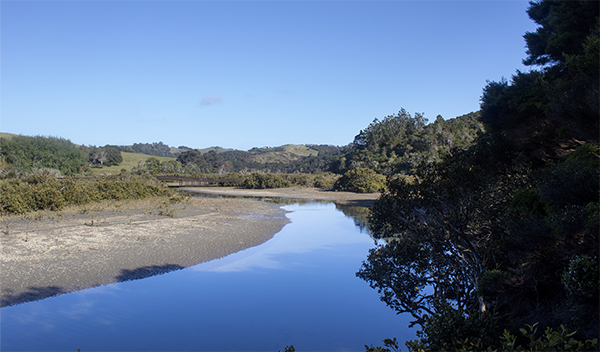 Disguised into Virtual Invisibility: Thanks to the contemporary preference for a significantly upstream siting, conforming nicely to that of the community in 1987, the boardwalk and footbridge of Te Muri Crossing will only be fleetingly visible to those crossing Te Muri Estuary on the traditional route—from the end of the farm road on the northern shore. A Pūhoi Estuary crossing, in contrast, is not nearly so readily disguised into virtual invisibility. image Davis Coastal Consultants | Mahurangi Coastal Trail Trust

The community, however, hadn’t been sitting on its hands, and formed more-detailed plans for the coastal trail, and the Mahurangi Coastal Trail Trust. Through the two stages of the regional parks management plan process that ensued, 523 submissions virtually unanimously supported the private-vehicle-free approach, and the proposed Mahurangi Coastal Trail. Despite the emphatic private-vehicle-free phase-1 feedback, the draft variation adhered doggedly to the dictum that reasonable public access could only be provided by private vehicle. However, a seismic shift in Auckland Council thinking was provoked by the advice that upgrading Hungry Creek Road would be heinously expensive, and, in any event, not on Auckland Transport’s agenda for the foreseeable future. The result:

Public access to Te Muri Regional Park will continue to be provided by crossing the Te Muri Stream while boardwalks and a bridge across the stream will be investigated and, if appropriate and feasible, developed with supplementary parking provided at Mahurangi Regional Park. 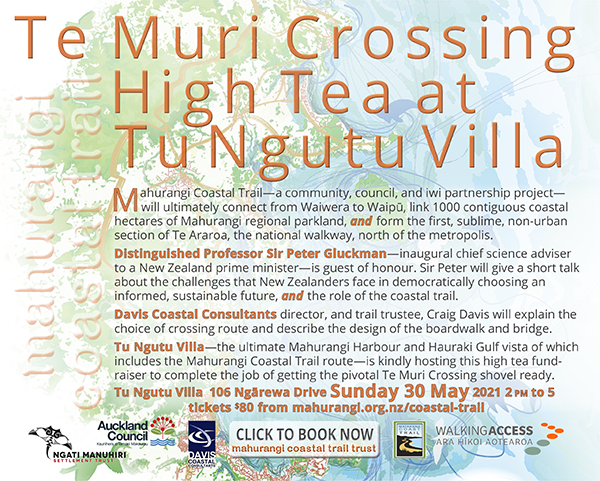 This policy is exactly what the Mahurangi West community had called for, in 1987. Meantime, hopes for private vehicle access were holding on by a thread:

Vehicle access to Te Muri cannot be contemplated until Hungry Creek Road and the intersection with State Highway 1 have been upgraded for the safe passage of park visitors. Once Hungry Creek Road is upgraded, an arrival area will be developed at the western end of the park.

Sometime this year, regional parks devotees will learn the impact of the Auckland Council imperative, adopted since the 2015–16 Te Muri Regional Park variation, to address the climate emergency. Upgrading Hungry Creek Road, including to facilitate horse-float access to the western edge of the 400-hectare park, is not only incompatible with Auckland Council’s own policies, but probably unlawfully emissions-boosting. The Pūhoi community has a vision for Pūhoi as the hub of a walking, cycling, and bridle path, to Te Muri. An initial stiff climb is challenging for walkers, and non-battery-assisted cyclists, but for a horse rider, it is the bridlepath beginning, par excellence.

The essence of Te Muri is its sense of splendid isolation. Thanks to the private-vehicle-access threat to its mauri being seen off once in 1987 and again in 2016, Te Muri has survived to be positioned as the regional park of the hour—a passive-recreation emissions-reduction exemplar. The draft management plan, when it is released, will record how close Te Muri currently is to meeting this existential imperative. 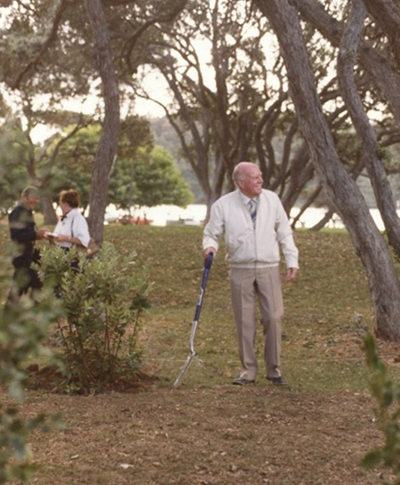 Dangerous Dreamer of the Day: If not for its visionaries, Auckland would not have its glorious, 41 000-hectare network of now 28 regional mostly coastal regional parks. First regional planner for Tāmaki Makaurau, Frederick Jones, pictured at a ceremonial tree planting at Wenderholm in 1986, three decades after having his first efforts—to secure Ōrewa, then farmland—knocked back by central government. image Dreamers of the Day

Te Muri coastal settlement counterfactual Peter Schischka was a gentleman, universally regarded with affection. The firm plans he and his parents had for the coastal margin of their farm, in the 1960s, was for it to be developed as a coastal vacation-home settlement.

Auckland’s first regional planner, Frederick Jones, was aware that the demand for such coastal settlements was going to make it increasingly difficult for the majority of Aucklanders to access undeveloped Hauraki Gulf beaches. Hence, when the Auckland Regional Authority was created in 1963, the purchase of Wenderholm was not far behind. The process of purchasing the coastal margin of Te Muri began in 1967, culminating in its compulsory acquisition, under the Public Works Act, six years later.

Accessibility must be borne in mind so that the fullest use of the reserves can be made by the regional population without undue travel.

While it is entirely human to crave haven from the New Zealand’s metropolitan population, Te Muri and the balance of the regional parks network was purchased to provide accessibility, particularly to the coast. The lack of accessibility to Te Muri is a 48-year anomaly, and—as sublime as that was for the relatively few who are privileged to access it—reasonable access to Te Muri is the right of the regional populace, for whom it was purchased. Just as it behoves those who value the sense of splendid isolation Te Muri affords, to respect the vision of people who fought for a better future for Te Muri than as other than yet another example of Whangaparāoaisation, it further behoves them to respect that the reasonable provision of walking access was the only alternative to driving access being provided to the beach. The counterfactual to Te Muri Crossing was Te Muri Beach Car Park, period.