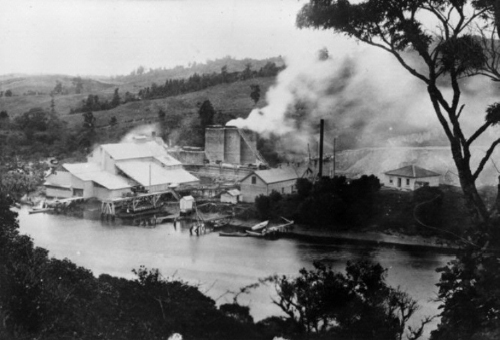 Colonial Aotearoaas published 2001: The colony spawned a host of would-be entrepreneurs. Perhaps it is not surprising that among those adventurous enough to leave home and loved ones for a raw colony on the other side of the world, there should have been so many willing to try their hand at anything. There were gaping needs in the market, but severe difficulties in filling these, with the limited means at hand. Ingenuity in improvisation flourished and became a national characteristic. Building a steamboat, complete to the engines, in the Auckland of 1851 is one notable example.

The sheer versatility of the early entrepreneurs is impressive. If the trade they brought with them was not profitable, they cheerfully abandoned it for something new, and often that again. Constantly they played it by ear as new avenues opened up. The transition of Nathaniel Wilson from shoemaker to the first and dominant cement maker in New Zealand is as good an example as any.

On the Mahurangi, the three most outstanding entrepreneurs were David Darrach, shipbuilder; Edward Morrison, nurseryman and orchardist; Nathaniel Wilson, founder of Wilsons’ Cement. Timbermen Browne and Dacre were of course the first (see Part 3), and the shipbuilders, Darrochs and Scotts, also qualify (Part 5). J A Brown left a special mark as the founder of Warkworth. The Parry’s dairy factory was a small and not very successful business, but played a key role in opening the district to dairying, which became its mainstay after the Great War. In shipping Sullivan led the way, but was eclipsed by the Kasper dynasty of scowmen, founded by the old cutterman Captain Charles Kasper (Part 5).