Going at Least Seven Years: Given that a Mahurangi Regatta was recorded by a passing farmer in 1858, the event was at least seven years old by the time this 6 January 1865 advertisement was placed. Given that, in 1832, the Mahurangi Harbour was home to the first Pākehā settlement in the Auckland region—it predated the founding of Auckland by eight years—it is possible that the regatta is older than Auckland’s. image New Zealand Herald

The regatta of 1865 almost did not occur. On 28 December, the New Zealand Herald reported that the settlers had decided to forego the festival, for fear that their homes would be pillaged in their absence. It was the troubled time when the Māori prisoners, escaped from Kawau, had been roaming the district, foraging in armed bands. However, by New Year they passed on to the Kaipara. Life went back to normal on the Mahurangi. On 6 January, the New Zealand Herald was commending the settlers in:

…setting the Aucklanders a good example in the energy they show in getting up their regatta.

The event was announced in the advertising columns of the same issue. The races, courses and prizes were laid out in detail. Run from Scotts beach, the event was thoroughly organised: Patron, the Hon. Superintendent; secretary, C. T. Lloyd; starter, J. Thompson; umpire, W. Walls Esq..

The first race was for whaleboats, pulled by oars. Course from the flagship to a boat moored off Grants Island, then to a boat moored off Ōpaheke? Possibly, Tungutu PointSullivans Point and back to the flagship. The second race was for yachts under 5 tons over the same course. The third was for flat-bottomed dinghies, not under two feet three inches on the bottom, to Grants Island and back. The fourth was for trading vessels of 15–40 tons register on a course to be decided on the night of entry. The fifth was as in the third, for boys under 18. The sixth for boys under 15. The seventh was for boys under 12, for “Mr Sullivan’s Prize”, a boat presented by Mr Sullivan. The eighth and final race was the double-handed dinghy race, pulled by a pair of oars. In all cases, three boats to start or no race, four to start or no second prize; all disputes to the committee. Additional attractions onshore were:

A contributed account of the day occupied a full column in the issue of 17 January, here abridged:

The Mahurangi regatta came off successfully on Thursday. Those who have witnessed regattas on the Thames, at Cowes or Cork, would find interest in this one, got up exclusively by the settlers at Mahurangi harbour. The weather was all that could be breeze sufficient for the sailing craft, and not too much for the frail ‘flat dinghys’, pulled by mere mannikins under 12 on the land-locked harbour.

The first race was arranged for ten o’clock but families assembled long before in groups along the shore, under the shade perhaps of a large portikaua, each puff of wind sending a shower of blood-red blossom. Stalwart settlers trailed strings of rosy-cheeked children. A number of Maoris present, principally William Pomare’s tribe, entered into the spirit of the sports with great zest. The Māori, bedecked in many colour, formed the mass of spectators, their faces scarcely darker than those of the weather-beaten settlers they mingled with.

But one foul eyesore marred this fair scene. Four or five of the gambling fraternity, imported the previous day, were pursuing their nefarious business: cards, roulette, dice etc. More unprincipled swindlers never plucked the unwary. The rattle of dice, and shrill discordant cries of ‘Make your play gentlemen’, arising from a mob elaborate in brass jewellery, wide plaid pants, saffron waistcoats and coats with many pockets, gave one a sickening feeling, when you looked around at the honest brown Europeans and Māori. The police will now see that they are protected in future from such devilry. William Pomare used his influence, and prevented red two Māori playing at once. Hemare, the resident magistrate was absent on business. About ten o’clock there is a bustle. The whaleboats are launched: Oddfellow belonging to Mr Morgan, Fanny Young belonging to Mr Nicholson, and Lion belong to William Pomare. The first two were well matched, but Lion, a heavy sea boat, could be seen at a glance to have no chance. A fair start is made. Lion soon falls off and race is between the others. The course from the flagship to Grants Island and back is about six miles. Tide and wind against them for three miles put the men on mettle, but they pulled with unabated vigour the whole course. Oddfellow won by a boat length.

After this several dinghy races came off. In the first, four started, and after a well contested match, Mr J Clare came in winner. Then a boys race. Men children (who if in England would be under a nurse, and whose fond mammas would go into hysterics if they had the least idea that their darlings were near the water) contested this match I forget the winner’s name but he handled his oars with much skill and dexterity.

Next came a yacht race which would provoke a broad grin on any with a remote idea of what a yacht is. Members of Royal Yacht Clubs listen! Three yachts– First, a medium sized punt with a sprit and lib; Second, a flat-bottomed dingey with a sprit sail Third, another punt, yawl or skiff, entered by the starter. The last two gave up at once — the crews, one lad each, not feeling inclined for a sail, returned to Mr Short’s hotel. Punt No. 1 sailed the course, and the lad who sailed her came back to the consolation of winning seven for his employer. 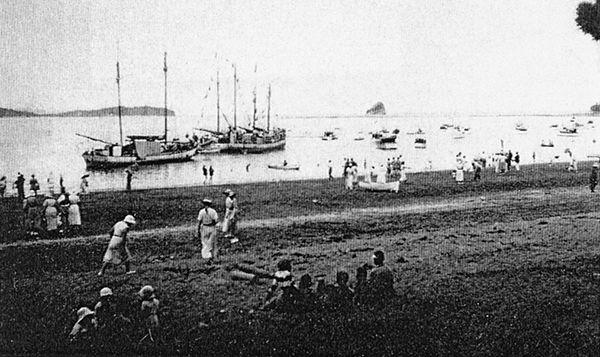 Scows at Sullivans: In their era, scows were integral to both the Waitematā and Mahurangi regattas. The Jane Gifford, one of the three pictured here at Sullivans Bay, since her reconstruction and relaunch in 2009, has been flagship for the Mahurangi Regatta. image Family archive

The next race (trading vessels) was the event of the day. Six started: Sea Belle, Betsy, Volunteer, Rosella, Mary Ann and Prince of Wales. The course was around the south of Saddle and Eden Islands and back. The start was really beautiful. At the get-ready signal the sails were unfurled as if by magic, and they danced off their moorings line like things of life. Sea Belle belonging to Mr McGechie soon takes and maintains the lead, coming in at about eight o’clock.

When these boats were fairly off, spectators turned to amusements on shore, notably a first rate dinner provided by Mr Short, who was indefatigable in promoting the comfort of all. Foot races got up on the beach afforded much amusement. The winner ran in bare feet, no small feat on a half-mile course over broken oyster and pipi shells.

To a new arrival there was much else to interest: a convoy of sharks, their black fins miniature sails above the water; the leap of mullet and snapper, oysters growing on mangrove trees. Hazy and dream-like in the background the Mahurangi Ranges, and towering from their midst the now celebrated Ōmaha, the delicious softness of the air, the forest trees ‘flaked with blood’, all combined to conjure up a vision like a joyous landscape of Turner’s, or a sublime poem of Tennyson. — A Spectator

The account contains several items worth comment. Firstly, the temptation to compare all to the English scene, is still irresistible. It is interesting that at that time Maori spectators outnumbered Pākehā. The event was then essentially local; in the next decade the steamboats would begin bringing trippers from town. Te Hemara is claimed to be a resident magistrate. The Motuketekete groupsouthwest to northeast: Motutara, Moturekareka, Motuketekete was known as the Eden Islands, presumably looking more idyllic then than now. All the traders were locally built, by Scott and sons, except for the winner, Sea Belle, built by James Clare. A champion oarsman, Clare was a certainty for the rowing race. His dramatic row to Auckland to be at the funeral of Sea Belle’s skipper, John McGechie—his brother-in-law—is described elsewhere. The “flat-bottomed dinghies” of the rowing races were probably the Mahurangi punts, which, as an old photograph shows, were around by 1862. The settlers were apparently too poor to own yachts. I have commented elsewhere on their apparent failure to use small sailing boats to save muscles. However, a sprit sail in a dory was still common when I was a boy.

The regatta flourished over the years. The Northern Steamship Company did good business in providing excursions from town on the day. In the 1920s and 1930s various well-known coasters served as flagships, tied up at the Mahurangi wharf, the abutment of which is the present end of Ridge Road, Scotts Landing. Among them were Captain Charles Emtage’s ketch Will Watch, Captain Fred Kasper’s three-masted auxiliary Ronaki, and Captain Reg Collins’ scow Jane Gifford, which would bring downriver a crowd of Warkworth folk.

The last war put a temporary end to the Mahurangi Regatta. In 1977 it was revived by Mahurangi Actionestablished 1974 as, and then, Friends of the Mahurangi, and is now held on the Saturday two days before Auckland Anniversary Day. Located at the headquarters of the Regional Park at ŌtarawaoSullivans Bay it is readily accessible by road from the city. Its rapid growth in popularity has surprised the organisers; it has become a recognised event for vintage boats, and indeed the major social festival of the district. As a fun day at least, it could claim to outshine its big brother on the Waitematā, held two days later.