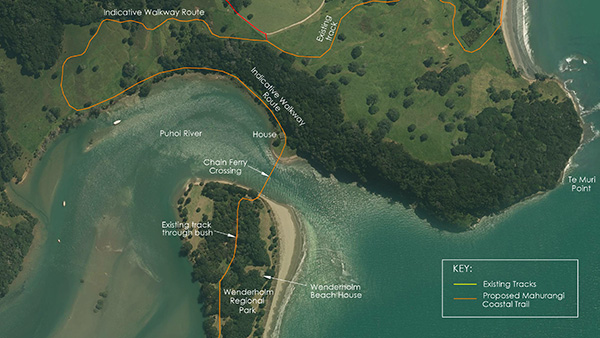 Going Gently into Splendid Isolation: Although an initial route between Te Muri and Wenderholm has been identified, with the help of Morphum Environmental and Parallax Surveyors and Planners it is hoped that a less circuitous trail can be identified that doesn’t subject families or the less able to the 1:4 gradient of the current farm track. In any event, the trail will skirt the Pūhoi River Cottage by a wider margin than is indicated here. The criteria for the positioning of the chain ferry crossing, meantime, is dictated, within a few tens of metres, to be clear of upstream sand banks and downstream sand bars. map Parallax Surveyors and Planners

If they understood the momentousness of their decision, there was no outward indication.

On Tuesday morning, Auckland Council, without discussion, voted to adopt the recommendations of the independent commissioners on Te Muri.

Given that between its purchase in 1973 and 20 July 2016, Te Muri’s administrators were intent on providing car access adjacent its beach, Tuesday’s vote to develop the parkland car-free represents a radical policy shift, at least in respect the 400 Te Muri hectares of the total of 900-hectare Mahurangi regional park estate that make up the greater Mahurangi regional park.

For more than four decades an ever-growing community of Aucklanders has worshipped, and feared for, the sense of splendid isolation that Te Muri affords. From that community, nearly four hundred submissions were received supporting Mahurangi Action’s concept of a coastal trail as the principal form of access. But if this decision to have car access take a back seat makes it to a footnote in the history of New Zealand’s response to anthropogenic global warming, it will simply serve to underline how little, by 2017, fossil-fuel-intensive lifestyles had been challenged. Without the imperative to protect this coastal gem, business as usual would have seen car access prioritised and public transport ignored.

While few would’ve been losing sleep in anticipation of Tuesday’s vote—in any event, acceptance of the commissioners’ recommendation by Auckland Council’s governing body was all but mandatory—masses were, coincidentally, due to being downwind of Australia’s global-warming-fuelled heat wave. While Aotearoa will, on average, be buffered from global warming extremes by its ocean location, periodically the Australian or Antarctic continents will subject its islands to, respectively, fiery or frigid blasts. But the short-termism practiced by politicians who, unsurprisingly, are mainly motivated by what enhances their chances of re-election, is increasingly locking in increasingly catastrophic climate consequences. Trumpism demonstrates just how dangerous this race to the bottom has become, where the prospects of the United States becoming a climate action world leader have, for the next four or eight years, have evaporated.

Preoccupation with regional parks and their future, in face of the existential issue of global warming, may appear to be arrant escapism. But the parks are the perfect places to demonstrate alternatives to the materialism and overpopulation which, through their fiendish by-product of greenhouse gases, has begun an unstoppable transformation of climate and coastlines. Of these inevitable impacts, commissioners Barry Kaye and Sheena Tepania saw as other than urgent, for example, the starting of a discussion of the future of the urupā at Te Muri, situated close to the most erodible part of the sandspit there:

We were told that there is no immediate threat from sea level rise for the cemetery but consideration will need to be given to this threat in the future in accordance with Council policy.

Mahurangi Action, the submitter that raised the issue, should probably be content that it succeeded in having the issue noted in the management plan variation at all. But it had specifically asked to be recorded:

…the need for an investigation to be begun as toword omitted from original submission a suitable long-term resting place for the human remains and memorials currently contained in the sandspit urupā of Te Muri.

If Auckland Council waits until there is an immediate threat to the urupā at Te Muri, to begin a discussion, there will be myriad immediate threats to all manner of relics, remains and infrastructure. Moving a sewage pump station inland requires little public consultation. The urupā, in contrast, deserves an unhurried discussion as to a suitable long-term resting place, possibly on a prime hilltop location overlooking the spot that the sea will reclaim, and possibly well before the end of this century.

In 1973, when the of coastal margins of Te Muri were acquired as regional parkland, the concurrent quadrupling of the world price of oil was insufficient to force a rethink in the regional parks car-centric development model. Today, Western Civilization’s historically brief love affair with the motor car is finally waning, as a generation emerges that sees car ownership as of questionable value and ethically dubious. Older people imagine their fossil-fuelled cars will be replaced in due course by electric ones, cleanly powered by photovoltaic panels. It is populist nonsense that runs smack into the laws of thermodynamics and which is never seriously challenged by the mainstream media. In contrast, buses can be astringently efficiently powered from grid electricity. However, in 1977, the same Auckland Regional Authority that was so heroically establishing the regional parks network, was responsible for scrapping its 133-strong trolleybus fleet for noisy, baby-poisoning diesel buses—the fact that they were Mercedes buses had the city swooning. And by 1979, the price of crude oil was $39.50 per barrel, up from $3 prior to 1973.

Underlining how far thinking has yet to come, Long Bay was cited to the commissioners as proof of how little-interested Aucklanders are in accessing regional parks by bus. At Long Bay, there is a little used bus stop just inside the park’s entrance, yet at peak times incoming cars are policed one-out-one-in. All that this demonstrates, however, is that those arriving by car are treated as the premier visitors, and that those arriving by bus must struggle in humility past thousands of parked cars in the hope of finding a congenial space on which to spread their picnic blanket. Wily parties will even send in a scout hours ahead to establish a territory, further inflating the number of cars displacing people.

Although regional parks planning still falls well short from what is required for the post-fossil-fuels era, the recommendations adopted Tuesday at least reflect that infrastructure other than roads is beginning to get a look in:

While outside the scope of the variation, it is also strongly recommended that the Council work with the land owners, mana whenua, the local community, the local board, Auckland Transport, NZTA, the Te Araroa Trust and interested stakeholders to promote and facilitate the development of a local trail network including the Te Araroa National Trail.

After first advancing the concept of a Mahurangi Coastal Trail as the primary means of access to Te Muri 30 years ago this year, this is indeed music to Mahurangi Action ears.

As was the commissioners’ preparedness to quote from Mahurangi Action’s favourite phrase praising the sense of splendid isolation, now secure at Te Muri.