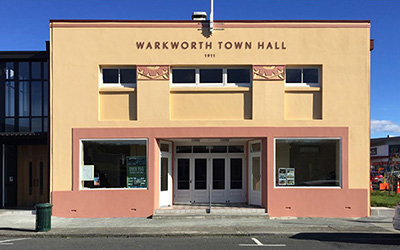 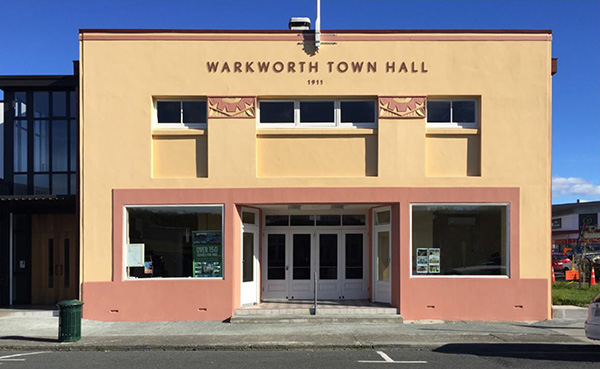 More Town-Hall Talks Action: In the continuing snowballing of actions catalysed by the Warkworth Town Hall Talks, the potential for putting the 1911 building to work as the meeting place of a Pūhoi to Te Arai community trust, to address the area’s multiple layers of needs and aspirations, is beginning to be explored. Restoring full access of whitebait to the Mahurangi River above the Wilson weir, and in other rivers and streams Pūhoi to Te Arai, is just one of those layers, and the subject of the 13 February Warkworth Town Hall Talk. And, you saw it here first, one of the options for a naming sign for the hall, the 1937 façade of which has never carried the building’s name, much less its date. image Matthews & Matthews Architects | Mahurangi Magazine

The immediate impact was to shock the community into taking responsibility for a ‘Mahurangi Action Plan Phase 3’, but not in the form of the council-dependent model that was set adrift following one too many rounds of restructuring. But also, perhaps, a model less obsessively Mahurangi catchment-centric.

The team, which weaves its magic as Landscope DesignLab, presented its first draft vision/strategy/plan to a well-attended gathering on Tuesday evening, with the stated aim of developing the work with the community. The presentation had every appearance of being genuinely consultative, an impression strongly reinforced the draft already reflecting much of the initial feedback provided, as it happens, the week before Dr Andrew Jeffs delivered his motivating town-hall talk on mussel-reef restoration. 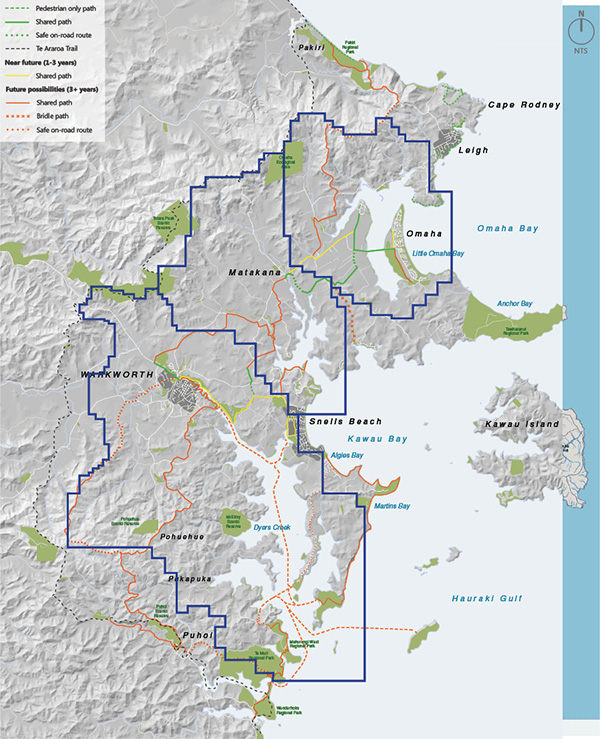 Logical Hydrological Layer: Catchment-centric organisations—Mahurangi Action, since 1974—already cover most of the Pūhoi to Pakiri coastline, but an opportunity has just arisen to extend this to Pūhoi to Te Arai, and routinely holistically address sediment attenuation as a part of all activities on private and public land. concept Mahurangi Action

Having learnt something of the power of theming and narration, Mahurangi Action sought a meeting with Dr Mick Abbott to explore a similar approach with whatever form the third phase of the Mahurangi Action Plan might take. Rodney Local Board member Allison Rowe, chair of the trust charged with advancing the greenways network, suggested coinciding the meeting with Dr Abbott’s December presentation. Anticipating that the vision presented would characteristically boldly holistic, Mahurangi Action prepared a concept for exploration, for a sediment attenuation ‘layer’ that would assist not just the work needed in the famously needy Mahurangi catchment but would also assist those working to care for all the catchments from the Pakiri to the Pūhoi rivers.

As it transpired, the layer approach was exactly the metaphor used by Landscope DesignLab in its presentation. This makes the synergies and scale possible by a district-wide approach impossible to dismiss. The reason that the trails groups were steered towards a collaborative joined-up network was the need to rationalise and streamline interactions with Auckland Council, Auckland Transport, New Zealand Transport Agency, not to mention local-board, council and central-government officers and politicians. With 1 council employee for every 225 Aucklanders, it probably behoves the community to self-organise more, rather than less, even if the serially maligned supercity gets by with fewer than half the per capita council employees that Christchurch appears to need. While the ratio of consultants to employees in the respective cities may or may not be very different, rates per capita in Auckland in 2014 were 20% below the New Zealand average, in city receiving comparatively less from central government.

Regardless, the pathways plan—by whatever name it becomes known—is set to become the biggest game going, Pūhoi to Te Arai. Rather than expecting the poor sediment-attenuation cousin to compete with that, being a layered part of it will benefit not just the Mahurangi catchment, but all those that flow into the Hauraki Gulf. An exploration has begun as which organisations could be amalgamated, restructured and repurposed to work in partnership with council, Crown and iwi, Pūhoi River to Te Arai—stopping at Pakiri and leaving the coastline from there almost to Mangawhai to fend for itself could, at best, be categorised as less than caring. A super community trust can make interreacting with a super city seriously more productive for all involved.

The same benefits apply to whitebait, which, while being under threat globally, are particularly imperilled in Aotearoa. Sometimes it is well-meaning riverbank beautification that is the culprit. With a whitebait layer in place, individuals and organisations would increasingly become attuned to how they could become part of the solution to the drastic loss of breeding habitat that is at the heart of the stark New Zealand statistic of 74%-and-rising indigenous freshwater fish species now listed as threatened.