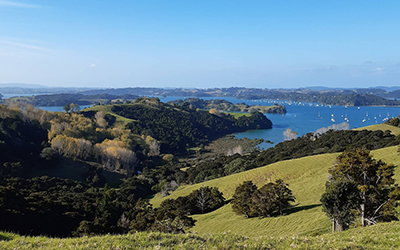 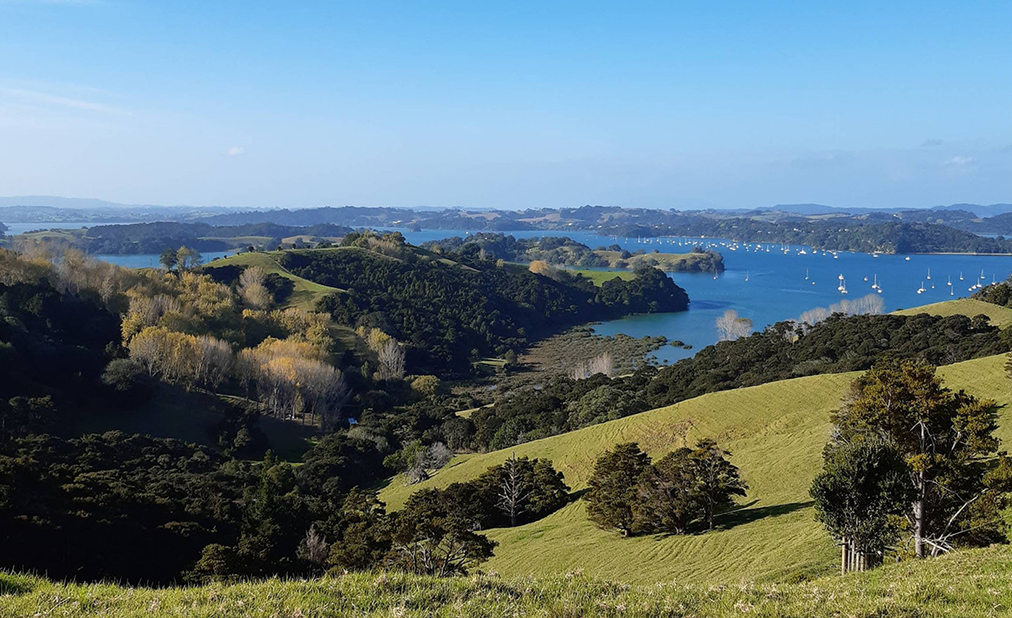 Pre-Mahurangi Action Plan Sediment Mitigation: Even prior to the Auckland Regional Authority’s 2004 initiative, a few Mahurangi property holders were already heavily invested in riparian protection. Mike and Norma Neil, half a kilometre along Mahurangi West Road from where the sediment mitigation programme was launched 17 April, had already fenced and planted their entire foreshore, and almost every last stream. However, the innovative methods they developed were alternatively disdained and ignored by the regional council’s team, whose key performance indicators came first. Undeterred, these innovators, with Mahurangi Action and Trees that Count, in 2020, have established a harakeke-based plant-and-walk-away trial. Potentially, this could lead to indigenous species being established at a cost comparable to radiata pine. image Auckland Council

“The good roads in the north, are in the south.

Thomas Richard Roydhouse, fourth owner–editor of the Rodney Timesthen fully titled, Rodney and Otamatea (Ōtamatea) Times, but referred to colloquially, even by its owner, as the Rodney Times, in his lament to parliamentarians he’d enticed to the Mahurangi tidehead town, reflected that following deforestation, Warkworth was an island in a sea of mud. The mud, of course, was the sediment that is now being dredged at great cost from the Mahurangi River.

Last year, a government scrambling to green-light shovel-ready projects to stimulate the covid-19 depressed economy was sold on the dredging programme. However, dredging needed to be paired with a substantial sediment mitigation programme, for the funding to remotely meet the $1.245 billion Jobs for Nature criteria.

Auckland Council, meantime, had a geographically proximate project ready to activate, the Mahurangi East Land Restoration programme. The small detail of it being about adventitious plants—weed, rather than sediment, control—wasn’t allowed to disqualify its inclusion, and the two-pronged programme was announced by Prime Minister Jacinda Ardern—4 July, literally, for the Mahurangi. 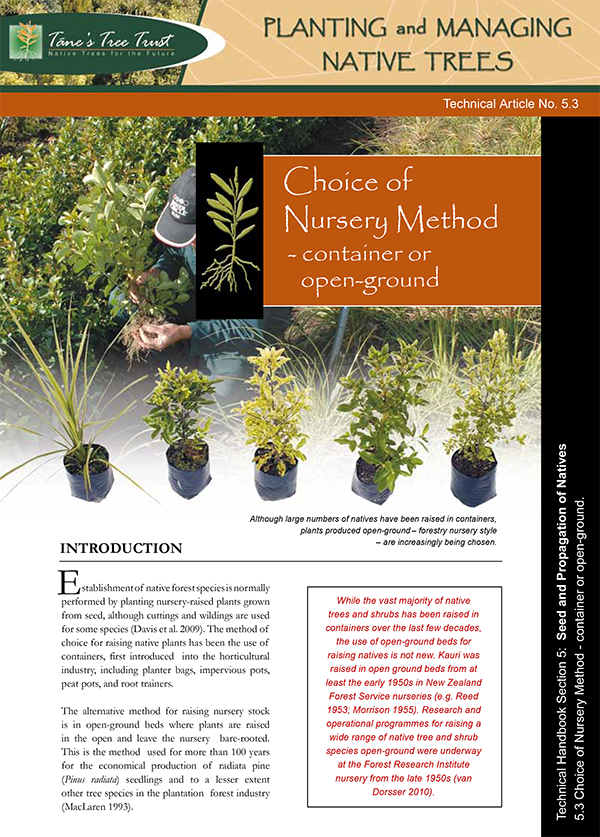 Mahurangi Action Plan World-First: The same brutal fact faces the 2020–2025 Mahurangi sediment action plan as faced the 2004–2009 one: the $5 million for the former and $3 million for the latter doesn’t buy, fence for, and plant sufficient indigenous species to significantly mitigate the 21 000 tonnes of soil that annually sloughs from the Mahurangi catchment. Despite authoring two technical papers detailing the economics of changing to forestry-style indigenous plant propagation in 2013, the work of Cimino Cole, Jaap van Dorsser, and Dr David Bergin has failed to be discussed by Auckland Council, not that its regional-council predecessor wished to other-than leave plant decisions to ignorance and market forces, either. publisher Tāne’s Tree Trust

At the 17 April official launch of the Mahurangi sediment mitigation programme, which is yet to slough its original name, two criteria were stressed, one being that, despite its weed-control roots, the funding was now totally directed at sediment mitigation—the other criteria being that the geographic area is the 122-square-kilometre Mahurangi catchment, west, north, south, as well as east. In addition to the expected riparian protection element, and small-building-site sediment mitigation, unsealed-road sediment attenuation is being tackled. This is a sediment source often cited in support of campaigns to have most rural roads sealed. But because the status quo is unacceptable and the sealing programme awfully incremental, other, cost-effective means of reducing sediment generation from unsealed roads can now be funded, under this programme. Being the most-requested, most overdue intervention, unsealed-road sediment mitigation is the topic of the first Warkworth Town Hall Talk, since that July’s $9.06 million Jobs for Nature announcement. Provided their second-Wednesdays-of-the-month slot is available, the town-hall talks will resume 11 August, with Adam Schellhammer speaking on unsealed-road sediment mitigation, in Mahurangi and Pennsylvania.

While government funded, the Mahurangi sediment mitigation programme, is delivered by an Auckland Council – Ngāti Manuhiri Settlement Trust partnership. Establishing such a partnership is not a two-minute exercise, just one of the reasons that 41 weeks elapsed between the prime ministerial announcement and the public launch. Hence, it was deliciously ironic that the first audience participation was a pepeha and whaikōrero by a Mahurangi West property holder asserting that his whānau and hapū—Ngāti Maraeariki—held mana whenua, because although Manuhiri and Maraeariki were both sons of Maki, the whenua, since Maki, has been occupied by Ngāti Maraeariki. Both Manuhiri and Maraeariki hapū, ultimately, are of iwi Te Kawerau ā Maki.

Presented by the superbly eloquent speaker Mel Whaanga, husband of direct Ngāti Maraeariki descendant Rosanna Beazley-Whaanga, the whaikōrero was both persuasive and warmly received. Speaking for himself—and indeed, many of the attendees—co-project-manager Adam Schellhammer apologised for being utterly unaware of the contested status of the mana whenua. One attendee later summed up his and other’s reaction in saying that it was a privilege to witness part of this process—whereby Māori reclaim something of the mana that was stripped, along with their whenua, from them, by a thousand cuts. 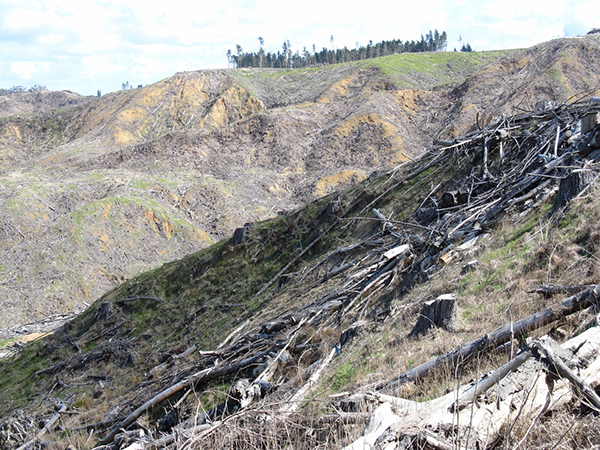 Inseparably Eye-Watering: Aside from making a soil conservator weep, the cost of replanting in anything other than radiata pine following clear-felling is eye-watering beyond the typically 10 times more costly plants—pest control, of both exotic animal and adventitious plant varieties, further contributes to the notoriously high cost of re-establishing indigenous forest. image Auckland Council

Subsequent questions were, not unreasonably, rather more prosaic, and spanned the gamut of what the council team referred to as the four areas of human activity causing sediment loss: small construction sites, forestry areas, rural land use, and the aforementioned unsealed roads. A question regarding a property holder’s desire to replant a steep former radiata-pine forest in indigenous species raised promptly brought to the fore the lurking issue of the exorbitant cost of re-establishing indigenous cover. Promptly aware of this early in the Auckland Regional Council-initiated Mahurangi Action Plan, the Mahurangi community organised the New Zealand’s, and apparently the world’s, first scientifically designed trials comparing the establishment performance of indigenous plants raised in containers with those raised by forestry nursery methods. The Mahurangi trial, and that conducted concurrently in the Weiti catchment, and subsequently in that of Lake Taupō, found no statistical difference between the establishment performance of the forestry-style indigenous plants and those raised in planter bags at several times the cost.

That this pioneering work has resulted in zero uptake of the potentially 10-times-more-economic forestry method—for selected pioneering species—is a tale told elsewhere. Like the world’s woeful response to covid-19, it bodes dire for the prospects for an even halfways adequate mobilisation in the face of the continuing rise in greenhouse-gas emissions—much less, humanely. There are, however, emerging signs that Auckland Council, which subsumed the regional council in 2010, is now embracing innovation, with electric fencing, a core tool in the pre-Mahurangi Action Plan sediment mitigation of a key Mahurangi West foreshore property. What the farmer found was that the fences could be periodically moved further into the pasture, as planted, or self-seeded, indigenous plants colonised behind the fence. This approach minimised the opportunity for weeds to establish.

The same farmer found harakeke to be a wonder plant in its ability to cope with competing grasses, kikuyu in particular, that would so readily climb, pull down and smother other indigenous species. The spear-tips of the harakeke leaves have the ability to project through the swarth of competing exotic grasses sufficiently to keep the plant alive until those perennials have flushed. In August 2020, 9000 harakeke and 90 tī kōukacolloquially: cabbage trees were established at Mahurangi West, in a further scientifically designed trial seeking indications as to what size of plant and density of planting might economically result in a plant-and-walk-away regime. Aimed at slashing the famously eye-watering cost of establishing indigenous species at scale, and combined with forestry-style nursery methods, harakeke planted as a nursery crop could be a game changer. Appallingly, funding for at-scale indigenous planting is invariably prioritised to put runs on the board, regardless of economics. Added to that, funding is almost never available for other than recognised carbon-sequestering tree species, leaving New Zealand’s ancient, endemic super-flowering-monocot-silver-bullet, old in the cold.

Since its inception last year, and at its launch Saturday last, recognition for the Mahurangi Action Plan, if not the holistic community–council Mahurangi Action Plan: A Catchment Plan 2010–2030—which did embrace the dredging—has been generous on the part of Auckland Council. There is every reason to hope that this Mahurangi sediment action plan does what the 2004 action plan aimed, but, until now, failed, to do and kick-starts the ongoing restoration of the Mahurangi catchment. But nor does it mean that the holistic approach should be shelved, for what remains of the five years. In May, a ministerial presentation at Mahurangi West will put the case for funding the Waiwera–Waipū Coastal Trailnot yet it agreed name to the tune of possibly $25 million. To some, no doubt, spending on that scale would appear preposterous, but unless Aotearoa builds low-carbon infrastructure for leisure activities at pace, its people and its visitors will remain addicted to gratuitous air travel, for which there is zero prospect of significant decarbonisation. And, to paraphrase Thomas Roydhouseand with apologies to Richard Pearson:

All the good trails in the north, are in the South Island—its rail trails.

The north can go a holistic lot better, with coastal trail complementing inland rail-with-trail. Meantime, Mahurangi West property holders are putting their money where their mouths are, organising an immediate blitz on weeds, on their own properties and on public land—see below