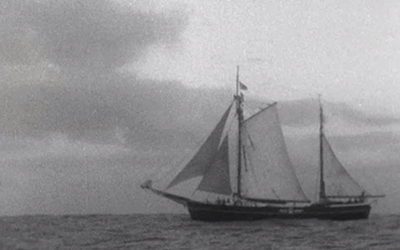 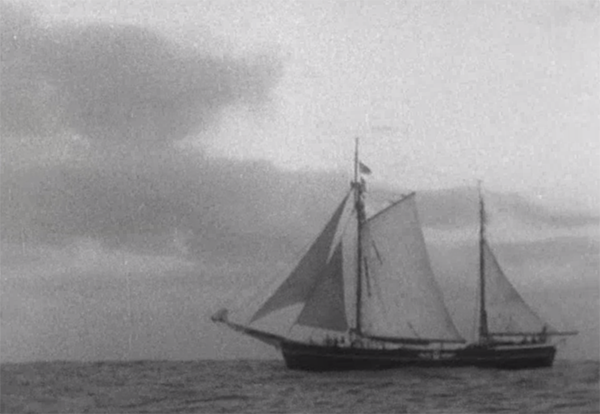 Nuclear Fri Zone: Filmed from battle-ensign flying nzhms Otago, the ex-Baltic trader Fri downwind of the Muroroa Atoll atmospheric nuclear weapons test zone. Reports from the protest vessel to the New Zealand media were complicated by draconian prohibitions against third-party use of amateur radio frequencies, and further by the manipulation of some communications, leading to the recruiting of a, local, intermediary more trusted by the media. image Mururoa 1973 | Alister Barry

In an ideal world, or even a fractionally less perverse one, the free-regatta-shuttlebus drivers would need to do little more than download an app. Cellular coverage at Scotts Landing would be so comprehensive that the opportunity, for example, for a driver to swing down Charles Street, and pick up a party-ready party from halfway along Young Street, seconds after leaving the paddock parking at Ridge Road could be conveyed by the dispatcher’s crisp words emanating from the hands-free:

In reality, delusional faith in market forces means that disparate, cellular service providers are rewarded for feasting on user-dense markets, and communities on harbour peninsulas are left with the coverage scraps—so meagre at Sullivans BayŌtarawao that ‘Cell Phone Hill’, to which campers would traipse for coverage, entered the script of Outrageous Fortune episodes filmed there.

Because Mahurangi Regatta comes but once a year, any communication solution needs to have utility on the other 364 days, of each. That need, of course, exists, and most conspicuously for community-response purposes. The Mahurangi has good friends. One such friend, an ex-navy, ex-Auckland University chemistry department instrument technician, who collaborated with a nascent Mahurangi local in communicating with the ex-Baltic trader Fri, off Moruroa, 1973. This year, after yet another abortive attempt to deploy ever-beefier uhf handhelds, it was time to ask another favour: 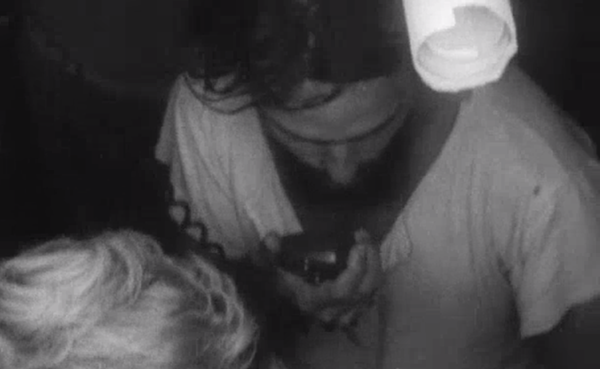 Last Fri Transmission from Test Zone: Illegally arrested in international waters, the captain of the Fri, David Moody, makes his last call before French marines remove the crew and tow their vessel from the test zone. image Mururoa 1973 | Alister Barry

“[Name redacted until statute-of-limitations kick in, in respect to 1973 unauthorised use of spectrum], would some form of repeater work?

Indeed, it would. Employing land-mobile-repeaters, land-mobile-radio systems are routine. They must be professionally designed and licenced, of course, to ensure that one group of users doesn’t inadvertently disrupt the communications of another. While they can be uhf- or vhf-based, the latter is far better at penetrating the topography that makes the Mahurangi harbourscape such a delight. The hope is that a friendly, approved radio engineer or radio certifier can be press-ganged to apply for the licence, to operate the repeater.

The catch, with what at first blush would appear to be a no-brainer, is the cost. The cost of a repeater is circa $3000, and, prior to testing, one repeater may not provide sufficient coverage. This would generally put paid to a promising, outside-the-box concept, after a frustrating back and forth between city council and local board, if not central government pursuit of funding. But, again, the Mahurangi has good friends. Support-in-principle for the first, prospective, repeater site, at Mahurangi West, has been obtained. Depending upon yet-to-be-performed coverage mapping, one more such site, at Scotts Landing, might square the circle. Nor does money alone solve all the challenges. Although frequency allocation could be readily licenced for a single day each year, for the Mahurangi Regatta, a year-round allocation would need to be justified by a significant level of usage. One possibility would be for Scotts Landing to regularly exercise the system for community response planning and training. But even that might struggle, even if shared with Mahurangi West community-response activities. However, if the full gamut of Mahurangi Harbour community organisations deployed the network, such as for the first-response fire trailers, and for pest, sediment, and weed control, the frequency allocation conceivably could be comfortably justified. The additional benefit, of course, is that emergency use of the system would become second nature. That may or may not ever prove to be the difference between life and death, but it is certainly not a stretch to imagine that it might.

Mahurangi Heads to a Tee: One of two tees of Auckland’s wooden Queen Street Wharf dedicated to the steamboats whose runs included the Mahurangi. The Coastal Steam Ship Co. became the Settlers’ Steam Ship Co., only to be absorbed by the Coastal Shipping Company, which serviced Mahurangi Harbour—Mahurangi Heads, on the sign visible here—and the tidehead town of Warkworth. Such was the competition between this company and the rival McGregor Company—based on the farther, neighbouring tee—that their respective vessels collided, twice. In the second collision, Alexander McGregor’s steel-hulled Claymore sank the Kapanui, drowning five of her crew. image Changing Times

The first mission is to ascertain likely coverage from one or other of several more obvious locations for a repeater at Scotts Landing, and the willingness of the respective property holders to host them. Fortunately, the preliminary survey can be done with hand-held devices already on hand, or on offer. Depending upon those results, or even regardless, the wider topography could be surveyed, given that synergies will probably prove to exist where one or other Mahurangi West repeater location provides comprehensive coverage of the western side of the Scotts Landing peninsula. Then, the expert coverage mapping could be commissioned, and all the more economically, thanks to locals doing the legwork. Again, a sympathetic approved radio engineer or radio certifier, or, failing that, a highly recommended one, would be a bonus.

Historically, Scotts Landing was the hub of communications for the Mahurangi Harbour community, due to its substantial, deep-water wharf. Not just Scotts Landing and Mahurangi Peninsula people, but those residing at Mahurangi West and Pukapuka met the steamboats there, either to journey to the city, collect supplies, or dispatch produce. The destination was then colloquially known as Mahurangi Heads—Heads used to differentiate Mahurangi Harbour from its tidehead town of Warkworth, then often referred to as Mahurangi, reflecting the name carried by its post office. Steamboat services advertised to and from Mahurangi Heads, typically, were to Scotts Landing, although sometimes these also included Rodmersham, at the heads, east, proper. It would be pleasingly apt if the ‘Heads’ reclaimed its role as hub of Mahurangi Harbour communications.