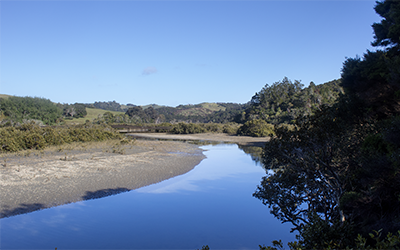 Wicked Te Muri Crossing: Logically, crossing the Pūhoi River was the place to kick-start the long overdue switch to public transport as the prioritised method of providing access to “the green gems of Tāmaki Makaurau”, the regional parks. But until the regional park planners climb aboard the Waiwera to Waipū coastal walkway waka, the community must be content to begin at Mahurangi West, which is a 17-kilometre-long, hazardous, highway-shoulder walk from the Waiwera bus stop. Once there, however, and once this all-but-invisible crossing is constructed, folk will be but a few minutes away from Te Muri and its sublime sense of splendid isolation. image Davis Coastal Consultants | Mahurangi Coastal Trail Trust

Wenderholm is a wicked place to tackle the wicked problem of anthropogenic global warming. Wickedly symbolic, to begin with—Wenderholm was the first of Auckland’s wonderful 41 000-hectare network of now 28 regional parks.

Throughout their otherwise proud 56-year history, Auckland’s coastal regional parks have been highly private-vehicle-centric. This was never socially equitable, nor environmentally sustainable, but now it is patently incompatible with salvaging a survivable climate. Once, public transport did serve Wenderholm Regional Park:

From my vague memoriesKit Howden pers. comm. 30 April 2021, it was a trial in the 1980s on summer weekends. Lasted a few years. It was done as a social service to enable South Aucklanders to more-readily visit prime northern beaches.

To recoin a Roydhousian phrase, all the good coastal regional parks in the south, then, were in the north. Be that as it was, the imperative for climate-action mobilisation means that private vehicle access to the regional parkland of Tāmaki Makaurau must yield its currently unchallenged most-favoured status, to public transport, and to cycling and walking access. Public submissions on the draft 10-year Regional Land Transport Plan close Sunday 2 May 2021. After some persistence, Auckland Transport has advised the Mahurangi Magazine by phone that submissions will be accepted until 11.59 pm, Sunday 2 May.

The Regional Land Transport Plan should state that the implementation of public transport to Wenderholm Regional Park will be prioritised.

Public transport once served Wenderholm Regional Park, the first of Auckland’s wonderful coastal regional parks. That notwithstanding, over their 56-year history, Auckland Regional Parks have been highly private-vehicle-centric. This was never socially equitable, nor environmentally sustainable, but now it is patently incompatible with salvaging a survivable climate.