Time for town hall to take it to city hall 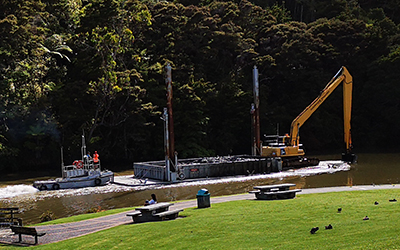 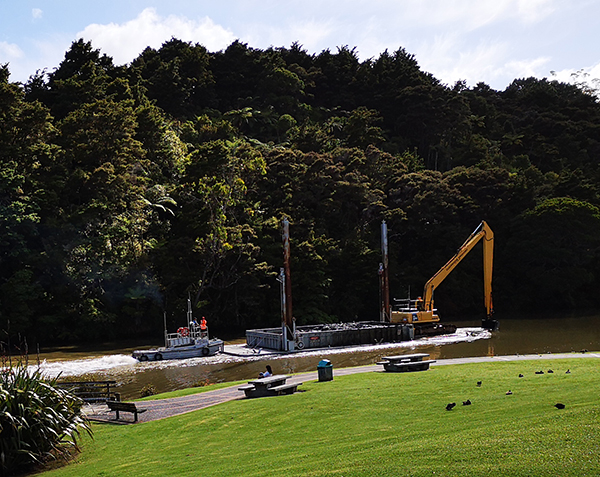 Unplugging the Mahurangi: When Rodney District Council was subsumed in the mother-of-all forced amalgamations, millions budgeted to begin the long-planned town basin and navigational dredging of the Mahurangi River mysteriously disappeared during the transition. Now, only by community organisations amalgamating their priorities will the will of Auckland Council be bent towards local aspirations. image Mahurangi Magazine

Warkworth Town Hall, inescapably, is where the community should assemble to make decisions for itself.

Not the Auckland Town Hall, with its region-wide responsibilities for a city of 1.7 million. In a slightly less imperfect world, Mahurangi and districts would have its own local board, meeting monthly in Warkworth. Lamentably, the Local Government Commission disdained the one reasonably practicable option handed to it on a platter by Mahurangi Action, and then belatedly found it needed to find a home for the orphaned Rodney Local Board, post the sale of the half-way-house provided by the council buildings in Ōrewa.

The perverse insistence of bureaucrats in rejecting local knowledge is only matched by its parallel in the private sector, where management typically is determined to not to heed insight from the shop floor. The phenomenon, of course, is a manifestation of the fear of those higher in a hierarchy to the prospect of ceding even a modicum of power to those lower-placed, by management maintaining a monopoly on the font of practicable ideas. The more legitimate reason for councils, however, to resist community power is that councils, in theory at least, are the democratically-elected representatives of the people. It is for this reason that it is incumbent upon community organisations to conduct themselves openly and democratically. 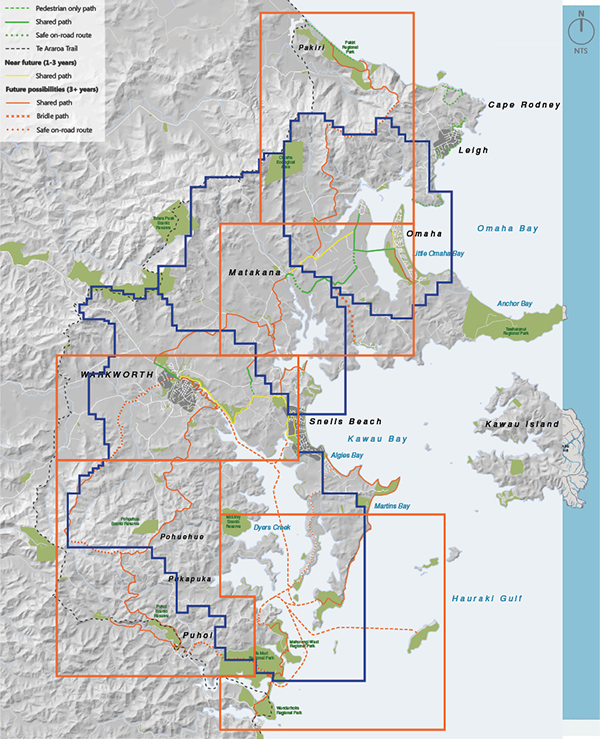 Hosting Shared Services: Until such time Mahurangi and its neighbours are served by a robustly resourced, representative community organisation, the path to progress lies in a coalition of the willing, willing to shoulder responsibility of hosting services that be shared across the network. The motivation for sharing can be entirely pragmatic, as in when the Mahurangi Coastal Trail Trust needed to present its project in the context of a network of trails, Pūhoi to Pakiri. Map illustrates but two of the overlapping layers of community interest—blue patchwork representing catchment-centric organisations; orange, pathways. map Morphum Environmental | Mahurangi Magazine

The failure of the Royal Commission on Auckland Governance to devise a framework that would allow, in this example, for a town-and-districts council to meet in the venue built for the purpose, in 1911. It illustrates how utterly unqualified and ungifted the commissioners were, for their hubristic decision to devise an entirely new governance structure, distaining the option of incremental amalgamation of the willing. That the probably most highly qualified international expert on local government amalgamation wasn’t invited to visit from the nearby University of New England meant that Aucklanders, and the royal commissioners in particular, were ignorant of the robust finding that, aside from any other consideration, forced local government amalgamations invariably yield no fiscal benefits, and worse, breed community resentments that poison council-community relations for decades.

The community has a clear choice. It can accept the status quo and condemn every community forum to function as a rubbish-Auckland Council-fest, or it can progressively organise, beginning—to take a leaf out of Professor Brian Dollery’s book—with services that can make the work of the respective community organisations vastly more efficient. And encourage and facilitate amalgamation or federation of the willing. Some amalgamations appear all too obvious, such as those currently focussed on the Mahurangi catchment, river and harbour, which include Mahurangi Action, Mahurangi Coastal Trail Trust, Mahurangi River Restoration Trust, and the Warkworth River Bank Enhancement Group. But nor, even for such seemingly closely aligned organisations, is full amalgamation necessary or necessarily the first step—the charitable status of trusts is granted for stated purposes, and some have contracts in play. In most cases, the first constructive step, aside from the town-hall meetings, will be the sharing of one or more services. 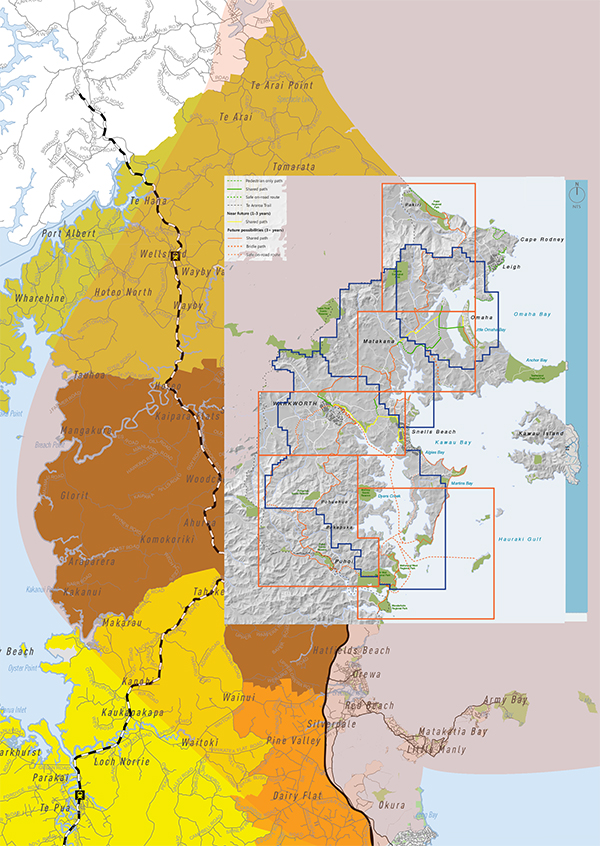 When a Little Bigger is a Lot Better: A Pūhoi to Pakiri community organisation, if extended northward to Te Arai, would greatly lesson the burden on Ngāti Manuhiri of being consulted separately by the 100-odd community organisations within the northern part of its rohe—boundary. To leave the northern section of the Auckland region coastline unrepresented makes no sense, particularly in respect to pathways, not least of all to Te Araroa, the national walkway. map Auckland Council | Mahurangi Magazine | Morphum Environmental

One of the drivers for the final amalgamation of Auckland City Council in 1997—bizarrely, until then, the city was governed by five fiercely autonomous ‘area offices’—was the need to implement a geographic information system. Clearly, having each area office procure and install separate systems would have been a nonsense. The fact that the city council went with a system procured separately from that already lined up by the local government associationLocal Government New Zealand, would make for an instructive phd thesis, if not a Netflix docuseries. Rationally, a country the size of Aotearoa needs but one geographic information system, but at least, since the 2010 amalgamation, the region is served by one.

To advance the practice of meeting to help decide the district’s direction, an interim step would simply be to open the doors for the after-work, second-Wednesday-of-the-month Warkworth Town Hall Talks an hour or so earlier. The forums—part deputation, part exploration, part formalisation—could be hosted by the lead instigator of the town-hall talks, Mahurangi Action, but could be used by any organisation that saw value in ventilating an issue or project beyond its immediate circle. The first such forum could be usefully be focussed on the town-hall-to-take-it-to-city-hall proposition. But, by then, the unplug-the-Mahurangi campaign needs to be in full flight. It is the perfect proximate example of why, from time to time, the community needs to drop everything to come together to get a once-in-a-lifetime project over the line.

Time for town hall to take it to city hall, nail this literally once-in-a-lifetime opportunity to unplug the Mahurangi.