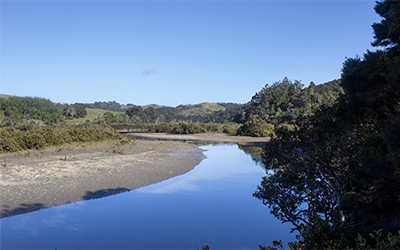 Splendidly Mangrove-Screened: Even from this inaccessible vantage, 70 metres farther upstream from where generations have waded across the body of the estuary, the planned Te Muri Crossing will be surprisingly inconspicuous. The agreed location is almost identical to the alternative vision proffered by the Mahurangi West community that, 35 years ago, saw off a conflicted Auckland Regional Authority plan to push a road bridge across the widest part of the estuary, and park 4000 cars adjacent the beach. visualisation Davis Coastal Consultants | Stellar Projects

Walk along Te Muri Beach on a sunny Sunday, and on up the gentle hillside to the saddle overlooking Wenderholm, and the contrast can be surreal.

Outside of the summer school holidays, and when the tide slides into Te Muri Estuary smooth and crisp and early, a walker may not have met another soul to that point, only to survey askance, a thronged Wenderholm beach below. Even folk without a misanthropic bone in their body can instantly feel strongly protective of the solitude, just one bay removed.

In the 1960s, the owners of Wenderholm and Te Muri respectively were planning their development as beachside vacation-home subdivisions. This, for most property holders of the era, was an entirely reasonable aspiration. One person who apprehended the consequences of this urge for beach bach ownership all too well was Auckland’s first regional planner, Frederick Jones. With the post-World War II baby boom well underway, he saw that, without a plan, the great majority of Aucklanders would soon lose access to non-urbanised beaches. 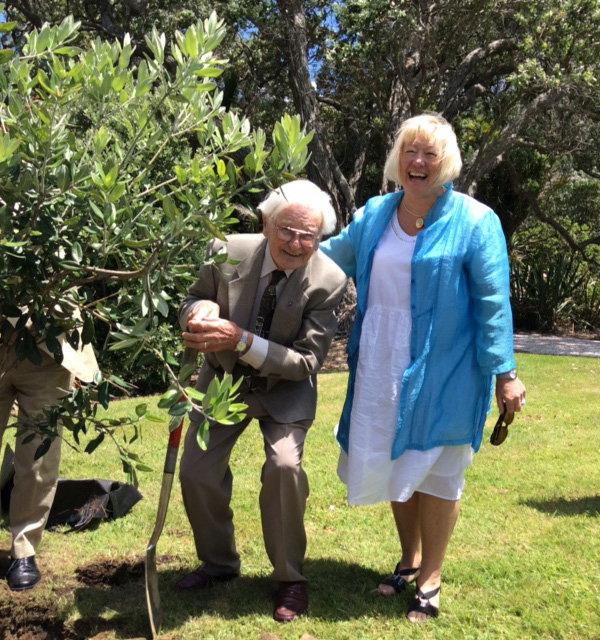 Not Always as Compromising: With Frederick Jones, Judge Arnold Turner is one of two fathers of Auckland’s regional parks network, having drafted the empowering legislation that allowed the acquisition, in 1965, of Wenderholm. Whereas Arnold Turner had Wenderholm open within a year, all-tide access to Te Muri, when it is built in 2021, will mark the 48thanniversary of its acquisition. Good things take time, and Arnold and his daughter Bronwen were the first to buy tickets to Saturday-week’s Te Muri Crossing charity cocktail party, five years ago. Judge Arnold Turner pictured with Christine Fletcher at the 50th anniversary celebration of the acquisition of Wenderholm Regional Park. image Bronwen Turner

Jones’ first attempt to preserve such coastline was when the farmland adjoining Ōrewa Beach was offered for sale. The government of the day, however, baulked at the notion of spending what, in today’s money, would barely purchase a single beachside property there. Jones’ next attempt was successful, but it only came with the establishment of the regional planning with teeth, and specifically with enabling legislation drafted by Judge Arnold Turner. In 1965 Wenderholm was purchased, the first acquisition in what is now 1000 hectares of contiguous Mahurangi regional parkland, and the first of a network coastal regional parks totalling 41 000 hectares.

Not everyone applauded the egalitarian ethos of regional parks acquisition—humans are hardwired to enjoy being masters of all they survey. Nor was the former Rodney County Council thrilled, as it saw coastal subdivision as a good little earner. One councillor in particular was a veritable minister for subdivision. But coastal subdivision was good for the council coffers, until it wasn’t. The escalating cost of providing services to such settlements was pushing up council debt alarmingly. The Whangaparāoa Peninsula was subdivided without water or wastewater being provided, and many properties are still without a water connection. Ōmaha was the straw that broke the council’s lust for coastal subdivision, and it wasn’t reticulated for stormwater.

In 1973, the coastal margin of Te Muri was compulsorily acquired. The owner was so exercised that he stood for, and was elected to, Rodney County Council—renowned for its recalcitrant relationship towards the regional authority. Mahurangi West locals, in contrast, were delighted to have early access to the new parkland, then sans its latter-day facilities. But, equally, they drank in its sense of splendid isolation, and, in 1987, were appalled that it was to become a mini Wenderholm, with a concrete road bridge across Te Muri Estuary, where they currently paddled, or waded, to reach their new, favourite place on the planet, and parking for 4000 cars. Locals organised and quickly realised that saying “shan’t” was unlikely to sway the regional authority, and that a more realistic strategy was to propose a walking-access-only alternative. Months of meeting and submissions followed, and thanks to the deliberative democracy then practiced, courtesy of the influence of Judge Arnold Turner, the community’s solution was embraced. 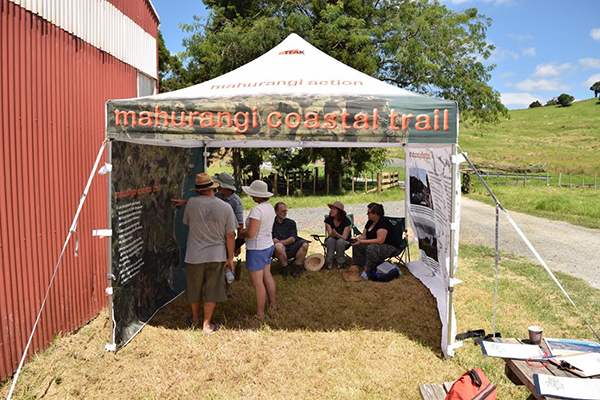 Thoroughly Canvassed: Consultative processes can be enervating for the community at the best of times, but when the same battle, such as to preserve Te Muri private-vehicle-free, has to be prosecuted through multiple stages, multiple times, it is doubly so. Here, Mahurangi Action’s gazebo, which does dual duty at the Mahurangi Regatta, played a key role in galvanising support from all but three or four of the 523 people and organisations providing submissions during the two-stage 2015–16 process, for the Mahurangi Coastal Trail solution to Te Muri access. image George Driver Mahurangi Matters

Thwarted in its road-access plans, the regional authority resisted subsequent community pressure to follow through with the boardwalk and footbridge that was pivotal to providing reasonable walking access. The excuse proffered was that no budget existed—a less than convincing explanation, given that budget presumably had been anticipated for the immensely more expensive reinforced concrete road bridge concept, spanning Te Muri Estuary. Some locals, and certainly subsequent arrivals, and Te Muri’s ardent campers, were more than happy for Te Muri to remain without all-tide access. Mahurangi Actionfounded in 1974 as Friends of the Mahurangi, and then known as, however, knew that it was only a matter of time before Te Muri would be made more accessible, and feared the recurrence of a private-vehicle-access proposal.

In the event, it was the acquisition of the 383-hectare balance of the original Te Muri farm that precipitated the access issue. This time, it was not a regional government Public Works Act purchase, but rather the initiative of the family members who had inherited the property, keen to honour their uncle’s wishes that the farm not be subdivided. The sale was the last regional parkland acquisition by Auckland Regional Council, before it was subsumed the 2010 creation of Auckland Council. Road access to Te Muri Beach was cited as one of the benefits of the $15 million purchase that stretched most of the way to State Highway 1. Despite the overwhelming response of 140 Te Muri adherents opposing road access and supporting a Mahurangi Coastal Trail alternative, council officers reported:

Long, long story short, the community desire to preserve Te Muri private-vehicle-free was achieved, long-term, with the management plan variation specifically providing for walking access across Te Muri Estuary. Although it was not its intention, the first community intervention resulted in Te Muri being regional parkland for nearly half a century with minimal public access. This means for some, with or without appreciating that road access would have fundamentally diminished the sanctity of Te Muri, any change, even the painstakingly unobtrusive crossing planned, will be deeply unwelcome. But reasonable public access was always a given, given that the land’s compulsory acquisition was predicated on it being required for passive recreation.

Response to the Te Muri Crossing charity cocktail party indicates strong community support, even at its $80 ticket price. Perhaps some registered primarily to hear guest of honour Distinguished Professor Sir Peter Gluckman, aware of his association with Ōpahi Bay’s never-beaten fishing competition champion, the legendary Professor Sir Graham “Mont” Liggins. Perhaps others have waited a decade for the opportunity to step inside Tu Ngutu Villa, with unrivalled vista of the Mahurangi harbour and coast, and the route of the coastal trail. But most, mostly want a chance to celebrate the, with Te Muri crossing, the sense of splendid isolation of their favourite place is finally protected, for all time, from private-vehicle access.